The Mediterranean Sea Is One Dangerous Place 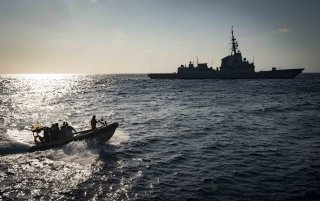 That’s a lot of armed forces fighting different foes in close quarters for different goals. It’s a microcosm of the tyranny of proximity—compressed into a single midsized country.

And third, great powers are vying for influence and status in the Mediterranean. Spykman warned that any global sea power aspiring to shape events in the “rimlands” of Europe and Asia—as he believed the United States should—must rule the marginal seas whereby ships of war approach the rimlands. He saw this as practical reality: ships can exert little influence along foreign seacoasts they can’t reach. Yet Russia has ensconced itself at the Syrian seaport of Tartus, making itself a resident power in the Eastern Mediterranean. If its navy could deny NATO navies access to eastern waters—or make them pay dearly for daring to go there—it could defeat an important part of America’s rimlands strategy.

U.S. forces would be pushed back, fulfilling a longstanding Soviet and Russian goal. In the ideal case Russia might even make the Eastern Mediterranean a nautical preserve. That’s a prospect that surely discomfits Italians, Greeks, Israelis, and other inhabitants of the easterly subregion.

Hence the Russian Navy firing exercises that will reportedly continue in eastern waters through September 25. They’re a statement about Russian maritime prowess. But Moscow’s motives are more than purely operational or strategic. In part today’s strategic competition is residue from the Cold War. Top leadership views the Soviet collapse as a “geopolitical catastrophe” that cost Russia not just its clout but its rightful honor, dignity, and deference among the fraternity of nations.

Showing that their military can compete effectively with NATO once again helps Russians recoup their international standing while soothing their embarrassment at the Cold War’s outcome.

Military and maritime strategists, then, confront an unenviable task as they try to preserve a delicate equilibrium in the Mediterranean Sea. A glimmer of hope may enlighten all this gloom, however. The tyranny of proximity may instill a measure of sobriety among regional decisionmakers. No one’s merchant fleet, navy, or air force is exempt from the geographic and strategic realities detailed here. Serious military action could render Mediterranean seas and skies a no-go zone—for everyone. A middle sea barren of shipping and air traffic suits no one’s purposes.

At sea as in nuclear strategy, the prospect of mutual assured destruction should impose a modicum of restraint.