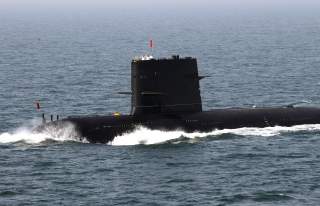 As “great power competition” ramps up, signs of arms races in America’s strategic relationships with both Russia and China are everywhere apparent. In this respect, Russian President Vladimir Putin’s March 1 speech made a big splash in the press, but readers may not be aware of the late tests in May when the Russian Navy simultaneously test launched four new Bulava submarine-launched ballistic missiles (SLBMs). These missiles were designed no doubt for nuclear strikes on the American heartland. Likewise, China recently announced the tenth test of its new road-mobile intercontinental ballistic missile (ICBM), called the DF-41. Furthermore, this test was to be of a missile-defense evading hypersonic warhead with the same general purpose in mind. If you grew up in the early 1980s, as I did, this script sounds all too familiar.

As in the first Cold War, today’s great powers are not satisfied with competition in the domain of nuclear weaponry, but also seek advantage in non-nuclear arms as well, just in case the “stability-instability paradox” holds and nuclear deterrence makes the world safe again for conventional war. That rivalry manifests itself, not only in a raft of new fighters and destroyers now coming online but under the sea as well. As unmanned vehicles have obviously revolutionized air and land warfare over the last decade, many defense analysts are confident the same type of revolution will impact undersea warfare in the coming decade. In this edition of Dragon Eye, we consider a new Chinese unmanned undersea vehicle (UUV) that could confront the U.S. Navy in future decades.

A variety of other Chinese UUVs have been revealed in this series before, but this brief discussion focuses on the vehicle HN-1, profiled in a mid-2017 issue of the Chinese defense magazine Ordnance Science and Technology [兵工科技]. The vehicle, apparently produced by the Aerospace and Sea Science and Technology Company [北京海纳科技公司] is profiled in a number of high-fidelity pictures, and its appearance is unusual as it strikingly resembles a swordfish. Indeed, the description begins by stating: "The natural world … offers humanity much inspiration, becoming a wellspring of each type of technological and engineering progress… [自然世界… 给了人类很多启发也成为了各种技术发明和工程进步的源泉]." No doubt this is an accelerating trend of Chinese maritime research. Furthermore, another quick example is an in-depth study of the pectoral fins of Blue Sharks that was undertaken with the explicit purpose of optimizing the design of autonomous undersea vehicles.

HN-1, dubbed somewhat mysteriously as the "flexible vehicle" [柔性航行器], has a fish's shape with head, fins, body and tail. The dorsal fin is said to house a communications antenna, allowing the vehicle to communicate with its mothership while in a semi-submerged status. The other fins help control the vehicle's stability, depth, turning radius, and also allow it to stop. Still, the vehicle's signature feature is its apparent ability to harness the "fish-like swim mobility type" [鱼一样游动方式] means of propulsion. That is most likely why the UUV is called a "flexible vehicle," as the body flexes with the tail to create motion. With a claimed maximum speed of 16 knots, the HN-1 may not be so swift. Yet, compared to other UUVs, that is remarkably fast, actually. Even more important is that, unlike almost all other UUV designs, the HN-1 lacks a propeller, which in turn suggests that its "stealth characteristics are extremely good [隐蔽性非常好]." Rather surprisingly, the article also mentions that HN-1 is equipped with the ability to release air bubbles to increase its speed, employing the same hyper-cavitation principles as the famous Russian Shkval torpedo.

However, before one gets too excited about this platform, it is worth emphasizing that, according to this Chinese article, the HN-1 had completed all land tests and computer simulations, but water tests were only just about to begin. Given that these tests are planned as of mid-2017, there is obviously quite a long way to go in the development cycle. Still, the article is impressively open regarding the specific parameters of the HN-1 vehicle. It is said to be 3m in length, weigh 200kg, be capable of carrying another 60kg, and have a maximum depth of 50m. The article reveals, however, that these Chinese designers have ambitions well beyond their “small-size HN-1.” Thus, it is revealed that medium (HN-2) and large-size (HN-3) flexible-type UUVs are also planned for development and related parameters are offered. Thus, HN-2 is suggested to be 6m in length, weigh 1600kg, be capable of carrying an additional 480kg, is projected to dive to 100m, and will have a maximum speed of 21 knots. Meanwhile, the whale-like HN-3 would be 12m in length, exceed 13 tons in weight, could carry in excess of 3.8 tons, at a maximum speed of 27 knots, and might be able to reach a maximum depth of 500m. Thus, “… with stealthy swimming capabilities comparable to nuclear submarines, its mobility and flexible characteristics could even leave nuclear submarines behind [潜游能力堪比核潜艇,机动灵活性更是把核潜艇远远甩在后面].”

The penultimate section of this Chinese article turns to the “combat” [作战] employment of HN-1 and this family of new UUVs. Here, it is noted that, in addition to having a low acoustic signature, its physical shape and qualities may well cause enemy sensors “to mistakenly believe it is a kind of fish [被误认为是鱼类].” For these reasons, this new Chinese undersea vehicle is anticipated to have “extraordinary survivability on the battlefield [极大的战场生存性].” In addition to intelligence gathering, the HN-1 is expected to perform missions related to “exploration… and rescue,” as well. It is thought that it could be particularly useful for mapping adversary minefields and the laydown of anti-submarine warfare networks. Then, the mission of “covertly penetrating” [潜入] heavily defended enemy ports and naval bases is mentioned too. This analysis contends that by employing its fish-like disguise, that HN-1 could fool adversary sensors in order to “make point-blank attacks on submarines and undersea infrastructure, rendering the enemy defenseless [对潜艇和水下设施实施抵近攻击让敌人防不胜防].”

According to this description, the HN series of UUVs will be designed to fight as a team in groups or "schools of fish [鱼群]." Within that scheme, the smaller HN-1 can function as a scout, HN-2 could take up combat roles, while HN-3 has the best sensors and thus could perform the command and control mission. To state the obvious critique, these are rather grand ambitions for a "fish" that has not yet been in the water. As the authors of the piece candidly relate, "There are many technical problems [技术难点很多]." Regarding the propulsion systems, for example, it is readily admitted that HN-1 "compared to a real fish still has a major gap" in speed and efficiency. Likewise, the power system also remains a challenge, and the article briefly mentions such remedies as solar cells or underwater recharging stations. Readers will not be surprised to learn that the U.S. Navy is also performing research on similar type bio-mimicking underwater vehicles and they may be reassured to learn that America seems to be a few years ahead in this research, but that is also difficult to say with any certainty.

In the last major naval war, the United States confronted Japan that had only about 18 percent of U.S. GDP at the time of the Pearl Harbor attack. Nevertheless, Tokyo still managed to outclass the United States in many areas of naval combat, including fighters and torpedoes, at least at the outset of the war. China’s GDP is now approaching that of the U.S. in size or, according to the latest CIA economic estimates, may already be significantly larger. Thus, it should not be surprising to see China’s military capabilities surging at an impressive rate. That is a fundamental reason (along with Beijing’s reasonably benign intentions) why it makes sense to “meet China halfway” now and so mitigate the “natural” tendencies toward great power rivalry. Those tendencies may sell newspapers, enrich selected corporations, and instill national pride on both sides of the Pacific, but they also waste enormous resources and involve unacceptable risks over mostly trivial matters.