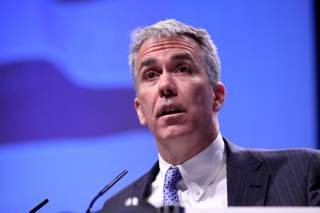 Walsh’s past improprieties have not gone unnoticed. “It negates one of the main reasons people dislike Trump in the first place, suggesting some of elite anti-Trump animus is really about his deviations from neoconservatism,” Antle told the National Interest.

J. Arthur Bloom, deputy editor of The Daily Caller, believes Walsh’s bad behavior shines a light on the real motivations of the Never Trump movement. “The Joe Walsh thing puts the lie to all the NeverTrumper talk about civility and decency. It was never about that, it was that they didn’t get to be in charge with Trump, so they took their ball and went home,” he tweeted.

“I think a lot of the people hoping for a primary challenge to Trump were hoping that the challenger would be more of a national figure. Someone like Maryland Governor Larry Hogan, for instance,” said Kabaservice. Hogan had previously considered a 2020 primary challenge, but decided against it. “[N]ot just because he seemed to be carrying the torch for an older and perhaps better Republican Party . . . but also because he was somebody who was one of the most popular governors of the United States right now and actually was governing at the present time. And I don’t think Walsh checks those boxes at this point.”