Meet the Neocons' Apologist in Chief 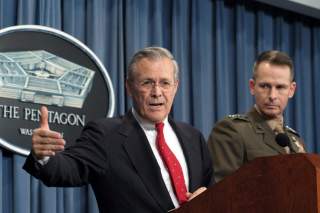 IN 1996, Michael Mandelbaum, who teaches international relations at Johns Hopkins University, published an essay entitled “Foreign Policy As Social Work” in Foreign Affairs. In it, he decried the Clinton administration’s interventions in Bosnia, Somalia and Haiti. “These failed interventions,” he wrote, “expressed the view of the worldwide role of the United States that the members of the Clinton foreign policy team brought to office.” A decade later, he published The Case for Goliath: How America Acts as the World’s Government in the Twenty-First Century. It formed an eloquent statement of “liberal hegemony theory,” the contention that the role of the post–Cold War United States as the sole hegemon has enabled both great-power peace and the benefits of economic globalization.

In Mission Failure: America and the World in the Post–Cold War Era, Mandelbaum blends these themes in a sweeping narrative history from the end of the Cold War until the present that seeks to diagnose where America has gone astray. Mandelbaum advances four major arguments. The first one essentially restates the thesis of The Case for Goliath that America’s overwhelming military superiority following the Cold War suppressed traditional great-power rivalries. The second is that the absence of great-power conflict made possible an era of economic globalization from which all sides benefited. The third argument holds that the relaxation of traditional great-power rivalries enabled the Clinton, Bush and Obama administrations to seek to effect the liberalization and democratization of foreign societies out of idealism, rather than on the basis of traditional strategic calculations—in other words, as “social work.” And the fourth thesis maintains that most of these projects of democratic transformation abroad were doomed from the outset because of the inherent difficulties in implanting Western values in backward, authoritarian societies.

Mandelbaum is an accomplished scholar and a skillful writer, two qualities that don’t always go hand in hand. But just how persuasive are his principal contentions? In examining the past few decades of U.S. foreign policy, Mandelbaum seeks to upend conventional wisdom about America’s role abroad. Ultimately, however, he affirms it.

THE PROBLEMS begin with Mandelbaum’s contention that post–Cold War U.S. military supremacy so effectively suppressed great-power rivalries that the very nature of world politics changed for several decades, with every other great power, including China and Russia for a time, embracing or at least acquiescing in a benign Pax Americana. “American power defined what President George H. W. Bush called ‘the new world order,’ along with three other features of international relations after the Cold War”—economic globalization, the limitation of nuclear weapons to “countries that could be relied upon not to use them” and

“the lack of interest on the part of China and Russia, each with the capacity to act as a traditional great power, in pursuing the assertive policies that in the past had put rivalry, security, and military competition at the center of international relations.”

According to Mandelbaum, the post–Cold War order’s defining trait was “the absence of the military and political competition between and among the strongest states around which international politics had traditionally revolved.”

For reasons rooted in the cultures and domestic politics of China and Russia, security competition among the great powers has returned:

“By 2014 both [China and Russia] had abandoned their reticence and restraint in favor of the classic great-power quest to control more territory. . . . Chinese and Russian foreign policies reversed the revolution in international politics that had taken place at the end of the Cold War. They restored the old international regime of power politics, thereby presenting the United States with challenges that differed from the ones with which it had been preoccupied for two decades.”

At first glance, this may seem like a compelling description of the last generation, with a holiday from great-power politics attributable to American global hegemony that ended with Russian and Chinese aggression in 2014. But neither the United States nor China nor Russia ceased practicing traditional great-power politics between 1989 and 2014.

In 1995–96—during what Mandelbaum describes as the absence of great-power rivalry—America mustered its greatest show of naval force since the Vietnam War during the Taiwan Strait crisis with China. The Shanghai Cooperation Organization (SCO), the major anti-American military alliance in the post–Cold War world, first took the form of the Shanghai Five (China, Russia, Kazakhstan, Kyrgyzstan, Tajikistan) as early as 1996, assuming its present name in 2001.

In 1998, violating informal promises to the Russian government, the Clinton administration and its European allies expanded the NATO alliance into Eastern Europe. Mandelbaum describes this as “the most consequential American foreign policy of the post–Cold War years.” Beginning in 2005 under SCO auspices, China and Russia have repeatedly engaged in large-scale war games which are widely interpreted as sending a signal to the United States and its allies. In 2007, China shot down one of its own satellites in a show of force directed toward Washington and other potential adversaries, creating the greatest amount of space debris in history; the United States responded in 2008 by shooting down a U.S. satellite, something it had not done since 1985 during the late Cold War. Six years before 2014, in 2008, Russia invaded Georgia to forestall possible NATO expansion. Combine this with Chinese and Russian military modernization and their low-level cyber attacks on the United States and its allies and it seems hard to describe the period of 1989–2014 as one from which “the old international regime of power politics” was temporarily absent. If this does not quite rise to the level of a second Cold War, it surely merits Boris Yeltsin’s “cold peace.”

THE COROLLARY of Mandelbaum’s claim that U.S. hegemony suppressed great-power rivalries between the Cold War and the present lies in his second argument: that the absence of great-power competition made possible a process of economic globalization that benefited all of humanity. Mandelbaum acknowledges that transnational financial flows can cause difficulties. But his discussion of international trade and manufacturing reflects the conventional wisdom of the U.S. foreign-policy establishment that more trade is always good: “Free trade—the unfettered flow of goods and services across national borders—always and everywhere enhances total welfare, a point established by the English economist David Ricardo in 1817 that has weathered many intellectual challenges since then.” On the contrary, the most successful industrial countries of the last three centuries—Britain before the 1840s, the United States and Imperial Germany in the late nineteenth century, Japan and the Little Tigers, and more recently China—have all initially industrialized by some combination of protectionism and subsidies for infant industries in strategic sectors. The leading industrial countries have adopted policies of trade liberalization only when the benefits of access to foreign markets for their domestic producers outweigh the dangers of import competition. The irrelevance of Ricardo’s theory of comparative advantage to industries with increasing returns to scale was well known to policymakers and thinkers like Jean-Baptiste Colbert, Horace Walpole, Alexander Hamilton and Friedrich List, even before Paul Krugman, Elhanan Helpman and others worked out the mathematical theory of trade in conditions of imperfect competition a generation ago.

In industries with increasing returns to scale—industries in which it is cheaper to engage in mass production runs than in limited production—there is a tendency for competition to be eliminated by large, efficient oligopolies or monopolies. At the same time, massive, fixed investment costs in industries like manufacturing make it difficult for new firms to enter the market. This is why there tends to be a small number of giant firms that make aircraft, automobiles, computers, steel and glass. Among other things, this means that under global free trade, countries like Victorian Britain with an initial advantage in increasing-returns manufacturing are likely to dominate global markets. Other countries seeking to catch up to the leaders—like the United States and Germany in the nineteenth century; Japan, South Korea and Taiwan in the late twentieth century; and China, India and Brazil today—can only do so by rigging markets in various ways in favor of their domestic industries.

The kind of rule-governed, borderless economic globalization described by Mandelbaum has never existed except as an aspiration. Notwithstanding the creation of the World Trade Organization (WTO), a weak and largely symbolic replacement for the older General Agreement on Trade and Tariffs (GATT), the actual story of the post-1989 world economy is one of a major shift from economic globalism to strategic bilateralism and “minilateralism,” driven mostly by strategic calculations or economic nationalism, not by devotion to the free-trade ideal of Adam Smith and David Ricardo.

The reunification of Germany after the Cold War inspired fears of a powerful, independent “Fourth Reich,” among French elites in particular. In the 1990s, deeper integration of the EU, including the adoption of the euro as a common currency, was widely viewed as a way of restraining German power while increasing the competitiveness of Europe in what was seen erroneously as an emerging three-bloc world centered on Europe, North America and Japan.