Memo to the (Future) President: 5 Things Clinton and Trump Need to Know about China 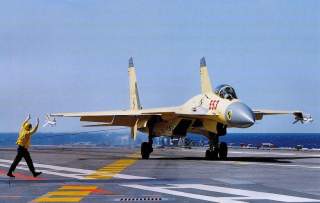 As Hillary Clinton and Donald Trump continue to sling accusations—and as their campaigns sink to new lows—they may want to remember that dangerous states continue to threaten America.

At the top of that list of adversaries is the People’s Republic of China. Here are the top five things for them to keep in mind.

Scarborough Shoal Could Be This Century’s Poland

Then, both Chinese and Philippine vessels surrounded the South China Sea feature. Washington tried to end the confrontation by getting both sides to agree to withdraw their craft. Only Manila complied, however, and China has remained in control of the feature since then.

The Obama administration did not enforce the agreement it brokered. If it thought inaction could defuse tensions, it was making a Chamberlain-type mistake. Chinese policymakers, obviously emboldened by their success, then ramped up pressure on Second Thomas Shoal, another Philippine feature in the South China Sea, and the Senkakus in the East China Sea, controlled by Japan but contested by China. The Chinese, in short, simply broadened the geographic scope of their provocative activities.

The White House, fortunately, changed course. In March, President Obama privately warned Beijing of, in the words of the Financial Times, “serious consequences” should China begin to cement over coral at Scarborough, thereby making permanent its act of aggression. In April, four U.S. Air Force A-10s, feared ground-attack craft, flew “an air and maritime domain awareness mission in the vicinity of Scarborough Shoal,” reinforcing the administration’s point. Analysts Zack Cooper and Jake Douglas believe the A-10 flights deterred Beijing from reclaiming Scarborough at that time.

Deterrence is not eternal, however. This month, a source told the South China Morning Post, which increasingly seems to have a pipeline to Beijing, that it was “a must for China” to reclaim Scarborough and that reclamation could be sometime after the China-hosted G-20, which takes place next week, and before the U.S. election.

Whether this reporting is reliable or not, Scarborough is a flashpoint. Some say it is like the Sudetenland in 1938, a quick conquest made possible by Western vacillation, but perhaps it is more like Poland in 1939, where nations in fact drew the line.

So what should Washington do? Chinese admirals need to see the U.S. Navy surround Scarborough with ships and, along with the U.S. Air Force, dominate the skies over that feature. Moreover, those admirals need to believe the United States will stay at the shoal, outlasting them.

Reversing China’s aggression will have a beneficial effect, not only in the South China Sea but across the world.

Does this policy carry risk? Yes, but due to past mistakes, there are no longer any risk-free solutions in China’s peripheral seas. As a first priority, we need to avoid handing victories to the worst elements in the Chinese capital. Over time, resolute policies will reduce incident risk.

One other point: during his campaign, Donald Trump has questioned the value of America’s alliances with Japan and South Korea. Whether he is right or wrong—he’s wrong, by the way—now is not the time to unwind the security architecture of East Asia.

On the contrary, at this time we should work more closely with allies and friends. Like-minded states can help keep the peace as they have done in other regions. China may be powerful at the moment, but it is now—and in the long run—no match for the United States, India, Japan and Australia, not to mention their assorted friends.

The Trans-Pacific Partnership Is Actually a Good Idea

Both Clinton and Trump are running against the Trans-Pacific Partnership, the proposed twelve-nation free-trade pact currently in trouble in Congress. President Obama announced the TPP in November 2011 as part of his “pivot” to Asia.

Clyde Prestowitz, the founder of the Economic Strategy Institute, believes TPP won’t matter much to American security. Writing in the New York Times this month, the former Reagan and Clinton official says many of the other eleven signers already have trade agreements with the United States. Yes, they do, but TPP is substantially more comprehensive, which is why nations want to be inside the new club.

Newsflash to Americans: there will be a region-wide trade pact in East Asia. It will either be America’s TPP or China’s RCEP, the misnamed Regional Comprehensive Economic Partnership.

President Obama is right: trade won’t stop just because obstructionists prevail in Congress. Some nation will write the rules of international commerce. That nation will be either America or China, and as Prestowitz recognizes, geopolitical influence follows trade. Countries, in fact, see TPP as a test of American leadership, and not just in the Pacific.

Beijing criticizes TPP, and that should be our cue to ratify it.

China Is Delinking from the Global Economy

The Chinese economy, for all its appearance of strength, is showing signs of severe distress. It is slowing toward a contraction, the country is accumulating debt at alarmingly fast rates, money has been stampeding out of the country at a record pace, and ruler Xi Jinping has been spearheading a return to regressive policies that can only have adverse consequences in the medium and long term. It is becoming increasingly apparent that the economy has reached the limits of what is possible in China’s current political framework.

China is no longer “reforming and opening up.” It is closing itself off. Need proof? Last year, the volume of its two-way trade fell by a stunning 8 percent. In the first seven months of this year, imports were off 10.5 percent and exports down 7.4 percent.

As China delinks its economy from the rest of the world, Xi’s policies are bound to become even more restrictive than those of his two immediate predecessors. The next American president, therefore, will have to confront market-closing policies.

Many argue we should counter Beijing by promoting liberalizing initiatives, like the bilateral investment treaty, long under negotiation.

The general approach of trying to open China up, however, is starting to lose adherents. Beijing’s compliance with its obligations is worsening over time and, unfortunately, we have no viable option but to impose costs on its predatory behavior. Those costs, to be effective, will have to be greater than the benefits China receives.

In this regard, Trump’s 45 percent tariff on Chinese goods begins to make sense. Many say that an across-the-board tariff would start a trade war. It is, however, impossible for Trump to start a trade war. China is already waging one.

Across-the-board tariffs, in the difficult circumstances we find ourselves, are not such a bad idea. Let’s remember that the Commission on the Theft of American Intellectual Property, in May 2013, proposed one to remedy the annual theft of hundreds of billions of dollars of intellectual property from American companies. Since we have done little since that report, the problem has only gotten worse. China is still cyber attacking American companies for commercial purposes despite last September’s “understanding,” announced in the Rose Garden by Obama and Xi, not to do so. The time for cooperative measures with Beijing in this area has long passed.

Finally, we need to begin demanding reciprocity in all economic relations. Treat the Chinese like they’re treating us. They’ll soon get the message.

China Is Supporting North Korea to the Hilt

George W. Bush built his North Korea policy around China, hoping Beijing would recognize that its interest lay with the international community. His successor continued the hopeful approach.

Many thought that approach worked when, in March, the White House engineered the adoption of UN Security Council Resolution 2270, the global body’s toughest sanctions regime on the North. The administration was optimistic that China would vigorously enforce the new rules. After an initial show of compliance, however, Beijing is now back to flouting this and other Security Council sanctions.

A significant amount of goods and commodities under sanction are now finding their way across the China–North Korea border. Especially disturbing, Beijing did not interrupt the flow of materials and components for Pyongyang’s nuclear-weapons program, such as cylinders of uranium hexafluoride, vacuum pumps, valves and computers.

Trade in other sanctioned items continued, most notably luxury goods, jet fuel and iron ore. Moreover, North Korean ships are making surreptitious visits to Chinese ports, a sure sign the two countries are engaging in prohibited commerce. Trade at the moment is so brisk that residents of China’s Dandong, the Yalu River trading hub across from the North, think the UN actually lifted sanctions.

Sanctions matter to the United States because Pyongyang has two missiles, the Taepodong-2 and the KN-08, that can put a dent in real estate in Alaska, Hawaii and the lower forty-eight states. In perhaps two years, North Korean technicians will have figured out, if they have not done so already, how to attach a nuclear warhead to those long-range launchers.

China has been helping to arm the Kim regime with the world’s most destructive weapons, and Washington has for decades tried to ignore Beijing putting American lives at risk. China has, for instance, supplied the transporter-erector-launchers for the KN-08, another sanctions violation. So, to solve our North Korea problem, we have to fix our China problem first.

The new president’s first act in office should be to sanction Chinese banks and companies for busting sanctions. So far, the Obama administration has not named any Chinese entity pursuant to the North Korea Sanctions and Policy Enhancement Act of 2016, enacted in February. Nor has it gone after Chinese entities for doing business with the regime after the June 1 designation of North Korea as a “primary money laundering concern” under the Patriot Act.

We Have Been Engaging the Wrong China

American policy since the early 1970s has been to integrate China into the international system of laws, rules, resolutions and treaties. The hope was that Beijing, as it became more powerful, would see that it had a stake in that system and help defend it.

This strategy has failed. As China has grown more powerful, it has acted to destabilize that system. The generous policy of engagement, practiced by the United States and most every other nation, has strengthened a regime that looks increasingly dangerous.

We need to learn something we knew last century: the nature of regimes matters. An illiberal communist state is unlikely to accept a liberal international system. The first thing for Washington to do, therefore, is reconsider its China engagement policy from top to bottom.

That reconsideration should result in two immediate changes. First, we should start engaging the democratic state we have shunned since the 1970s, Taiwan. Work with Taiwan, and the United States will gain an ally to help maintain peace and stability in the region, build support for endangered principles of freedom and democracy, and show Chinese leaders it no longer fears them. It’s always better to engage democrats than autocrats.

Second, we need to fully engage the Chinese people. China is unstable because the Chinese are having an extended argument with an insecure Communist Party. It is in our interest, from so many different perspectives, to talk to those who might be running the country in the not-too-distant future. That includes democracy activists, homeowners, religious adherents, Tibetans, Uighurs and workers—and the millions in Hong Kong who are obviously fed up with Beijing’s rule.

We have, over the course of decades, been engaging the wrong China.