Memo to the President: How to Transform Civil-Military Relations 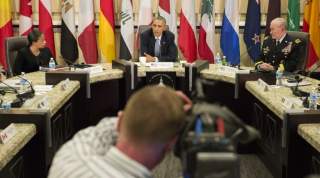 Relations among political leaders, civilian agencies and the military blow hot and cold. At this point, things are rather chilly.

For more effective coordination between civilians and soldiers, the next occupant of the Oval Office will need to instill a better leadership style, review the command at the Pentagon, and renew the ethical foundation of government service.

Managing the mix of civil-military affairs always invites controversy. The Constitution blends authority in way to prevent one from eclipsing the other, delivering both a delicate balance and constant friction. As chief executive officer of the federal government and commander-in-chief of the military, the president’s goal is always to maximize the competing virtues of both. The Constitution provides for a strong civilian executive who can wield military power as a unified instrument. On the other hand, the Founders didn't want an armed force that would be a mere tool of its political master. Hence, for example, members of the armed forces swear their allegiance to the Constitution rather than to the commander-in-chief.

The history of American civil-military relations is replete with ups and downs—from the uneasy triangle between Washington, Jefferson and Hamilton, to Truman’s firing of MacArthur, to Lyndon Johnson picking targets for the military in Vietnam.

For most of America's history, the strains appeared most prominent under the pressure of wartime service. That changed during the Cold War, when a large standing military became a fixture of the American life. Since the 1950s, concern over civilian control of the military has reappeared periodically like the recurring irritant of psoriasis.

Enter Samuel Huntington. In 1957, he published The Soldier and the State: The Theory and Politics of Civil Military Relations. Huntington neatly describes how civil-military activities work. The military operates in a separate but subordinate sphere, he concluded. Political leaders do the politics and provide the overarching guidance of what is to be done. The military sticks to its area of competence—the application of military power. If America were a car—the civilian leaders would steer, the military would be the wheels. Each would stick to its own function.

The military loved Huntington. His framework gave them clear, precise guidance. In the wake of the Vietnam debacle, Huntington's influence became even more dominant. To many in uniform, that great failure was caused by politicians who not only failed to fulfill their responsibilities—mobilizing the nation for war and building public and political support for the effort—but also committed other blunders by intruding into military affairs, exceeding their competence, and micro-managing the conduct of conflicts.

Yet, even after the bitter experience of Vietnam, civil-military relations continue to see sharp disconnects. Carter had scant use for advice from the Joint Chiefs of Staff. Under Reagan and the first Bush, respect for the military surged, as did the influence of the Pentagon. During the Clinton years, critics complained that the military overstepped its bounds, wielding undue influence. Donald Rumsfeld, George W. Bush’s Secretary of Defense, promised to re-assert civilian control. Subsequently, President Obama has been criticized for marginalizing military input into the most serious decisions.

Huntington's influence has never been fully eclipsed—but it has also never worked very well. That’s because Huntington was dead wrong. What he described in The Soldier and the State was not how civil-military relations really work. Further, it is not even how they should work. Wars can't be won with military commanders camped out on Mars and civilian leaders living in a condo on Venus.

Washington has been reading the wrong manual.

A far better guide for how to think about squaring the circle between the White House, the Pentagon and Foggy Bottom appeared in 2003, with Eliot Cohen's book, Supreme Command: Soldiers, Statesmen and Leadership in Wartime. Cohen's book not only details Huntington's mistakes, it describes a model for healthy civil-military relations even under the most difficult of occasions.

Cohen argues that, rather than envisioning civil-military operations as separate spheres, they should be recognized as domains that overlap. Relations work best when both civil military leaders are adept at operating in the gray area in between. Soldiers shouldn't play politics, but they should be competent in the political affairs that shape policy. Political leaders shouldn't try to act like lance corporals, but they must understand enough about the affairs of the armed forces to recognize when military instruments are being used in a suitable, feasible, and acceptable manner—and when they are not.

In reality, the best American leaders always followed Cohen's recipe. To give one example, Supreme Command describes why the partnership of Lincoln and Grant proved so effective. Eisenhower knew the right formula, too. His concern over the military-industrial complex arose not from a lack of confidence in his own capacity to bridge the civil-military divide, but from the possibility that his successors might not understand equally as well the critical role leadership plays in making everything come out right.

To make civil-military relations an asset rather than a headache, the next president will have to take steps early to get everyone working from the right playbook.

First and foremost, the president must accept that the state of civil-military affairs starts at the president's desk. Without the right kind of leader, the system just can't work all that well. Strategic leadership requires not just willingness to do the job, but the ability and the discipline to actually get it done. Character, competence, and critical thinking are the hallmark of strategic leadership.

The president must accept that political-military affairs can't be outsourced to the Pentagon. On the other hand, he or she must understand that the partnership can't succeed with a chateau commander-in-chief making all the critical military decisions in isolation from the Brass.

Second, the president can't just bring in a new political team and expect the quality of civil-military relations to rebound. Initially, the White House will have to carefully review senior military leadership to make sure they constitute a well-balanced team—one in which leaders’ skill sets and leadership styles complement one another.

The second task is bound to be the most stressful and controversial. Some senior leaders already in place may not be the best fit. That says less about the competence and character of any individual military officer than it does about the skills and chemistry the president needs from the defense enterprise. Sometimes sports teams trade away their top all-star, not because the player lacks talent or production, but because he’s just not the best “fit” for the team. So it is with a defense team.

Without question, the ability of senior military leaders like George Marshall to pick exactly the right leaders for the task at hand was instrumental to the success of the U.S. military during World War II. The next president will have a long and difficult to-do list. The new president will have to start at the beginning, by assembling a strong, cohesive team.

The third task of the new president will be to put the future of civil-military relations on a firm foundation. Leading by example will make a big difference, as will having a strong leadership team. But the president will also need to build, from the bottom-up, a cadre of professional civil-military leaders inculcated with the values of Cohen model.

A professional development program will build stronger leaders, in turn building trust and confidence between leader teams and ultimately leading to organizational and process reforms that deliver better performance. Such a program starts with education: leaders must learn the skills, knowledge, and attributes that will make them successful in civil-military affairs.

Next, the program must offer the next generation of leaders an operational opportunity—some kind of duty or assignment that allows them to put what they have learned into practice and to prove they are good at it.

Finally, a development program must have a means to: validate that it has provided participants with the right education, appropriate operational assignments; track where they are developmentally, and deliver them to the right critical job at the time when they are needed.

Properly trained and equipped, these leaders can form the nucleus needed to transform civil-military relations for maximum effectiveness.

This step will not be easy. The people who are the best candidates for professional development will also be the ones in greatest demand. Creating the space for building their skills will require creative solutions. It is not reasonable, for example, to pull a senior person out of government for a year of formal schooling. There has to be a better way.

A twenty-first-century human capital management framework also must be provide multiple paths to finding and developing “just-in-time” talent needed to respond to emerging demands. Looking for cyber leaders is one example.

It is vital that the president start implementing the three-part process as soon as possible. Starting early, perhaps modestly, but with focus and clarity of purpose, is critical. Initial efforts could be informal; the new administration might tinker with different models and initiatives. The main thing is to get the ball rolling. Just initiating an initiative will send a powerful signal to everyone that the president is serious about giving the nation a high-performing civil-military team.