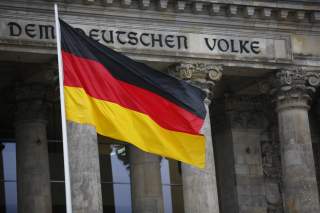 If this looks like a caricature of the German security debates of ten years ago, that’s because it is—if you listen to parties’ discussions and read their position papers. It does not, however, fully reflect popular opinion or the reality of Germany’s international leadership. Thousands of German troops are deployed abroad, including in Afghanistan, Iraq and Mali. Billions of additional euros are being spent on re-equipping the military, development aid, stabilization and humanitarian action. The strategic implications of these changes have not yet become a subject of debate within the major political parties.

UNLIKE WHEN her previous terms began, in 2005, 2009 and 2013, international security will be a crucial part of how Merkel’s last term will be remembered. Displacement and migration have become first-order political issues. For parties that are committed to the rule of law and an open society, political survival depends on their ability to defend themselves and their societies from illiberal demagogues. That imperative has brought not just the management of refugees, migration and immigration, but also the prevention of avoidable displacement—a preventive security policy that utilizes diplomacy, defense and development assets to maximum effect—to the top of the next government’s agenda. Of course, climate change alone will ensure that the causes of displacement are only going to grow. All the more important, then, to develop convincing strategies to better prevent avoidable displacement.

In this, Germany’s security and economic interests lead to the same conclusion as its values and historical responsibility. Peace and security around Europe have become a decisive political issue for governing Germany. And, together with Paris, Berlin will have to move quickly. The window of opportunity to start building a real European preventive security policy is closing fast, as elections to the European Parliament are scheduled for 2019.

TO HAVE identified international security as a “core task of foreign policy,” as Heiko Maas did in his very first internal speech, is a good start. The key problem that has blocked progress on joint European security efforts so far is the fundamental divide between its eastern and southern member states. For the eastern Europeans, the Russia threat is most urgent. They seek military solidarity from their EU partners. For the southern Europeans, the Middle East and Africa are closer; they continue to carry the bulk of the refugee burden. They want their EU partners to do more in terms of conflict management.

Germany is the only European country with the political weight and legitimacy, as well as the financial means, to bridge this divide. Only if Germany invests in both its eastern and southern neighbors’ priorities, for defense and conflict management alike, will it be possible to build a truly joint European security effort that protects everyone equally. This is Germany’s leadership challenge regarding European security in the coming years.

Germany has proven its readiness to spend more and take necessary risks; if the economy continues to thrive, it will have the means to underpin this crucial role. What is missing is an urgent security update to its political operating system. In Berlin, the notion of “security” remains almost entirely confined to defense and the military, automatically privileging territorial and alliance defense, and thus the east over the south. Balancing the two pillars of a modern security policy—conflict management and territorial defense—would be the first step in getting ready to lead.

For the first time, the coalition agreement has found the right language. Spending pledges for diplomacy, development and defense are framed as part of “a comprehensive, joint peace and security policy.” However, as long as conflict management is treated as an afterthought while alliance defense absorbs most of the attention, no comprehensive peace and security policy can emerge. How is Berlin going to have a real strategy for Mali or Iraq with just one or two political analysts per embassy in Bamako or Baghdad, and with one-third of its military helicopters broken while another third is late for delivery?

FIXING THESE shortfalls will require more than just putting more money into the same tools. The last government began to rebuild the Bundeswehr to be able, in the future, to provide the backbone of alliance defense in Europe. Solidarity with Germany’s eastern neighbors requires as much; it would be arrogant and offensive to belittle their fears.

While urgent initiatives are required to salvage as much as possible of the arms-control system, conventional disarmament will have to take a back seat until there is another opportunity for détente. NATO’s credibility rests in part on reestablishing the German contribution to alliance defense; it provides the best chance to maintain the U.S. security guarantee for Europe for as long as possible. At the same time, both the diplomatic service and the Bundeswehr need to build up their conflict-management capabilities. “Preventing Crises, Resolving Conflicts, Building Peace” is the title of a government white paper issued last summer as a road map for the coming decade. Issuing the white paper was a start, but much remains to be done to meet its aspirations. Germany must invest in early-warning political analysis and strategic coordination in conflict regions as much as in key military capabilities to strengthen UN peace operations, for example, since the UN bears the bulk of the conflict-management burden in Africa.

Germany needs different capabilities for Asia. For example, more than half of the EU’s foreign trade, or almost 20 percent of German exports, passes through the Indian Ocean. The region itself is a growing export market, but also an emerging hot spot, since geostrategic rivalries among the key actors are heating up. It would be in Germany’s and Europe’s strong interest to support the development of a multilateral security order around the Indian Ocean. So far, for lack of both diplomatic and naval resources, German efforts have been minimal.

BEYOND THE necessary investments, crafting a “peace and security policy” will not be easy, because the effectiveness of many of its means is fundamentally in question. Rather than trying to pass every litmus test established by a prominent ally or commentator, Berlin and its partners must face up to the fact that many past attempts to manage violent conflict have failed dismally. Mismanaged interventions have done terrible damage, even as some, as in Libya, have also saved thousands of lives. Low-level interference, as in Syria, failed entirely to limit the bloodshed. Ill-implemented development spending helped hollow out the state in Mali, facilitating its near collapse in the face of the 2012 rebellion. Berlin must help Europe learn from these mistakes. Rather than reinventing the (broken) wheel of interventionism at the EU, taking responsibility for security requires investing in tools that work better, such as some of the UN’s, and for the EU to design even better tools of its own.

Particularly in light of Macron’s call for a common strategic culture of “interventionism,” Germany needs to better signal both the extent and the limits of the current shift in its strategic culture. Too many international observers still expect higher defense spending and growing expeditionary capabilities to merely indicate growing support for intervention. The reality is more complicated. On the one hand, there is a growing popular acquiescence to the use of force even if the strategic case is not very well made. Germany began deploying to the UN mission in Mali in 2013 and to the counter-ISIS air campaign in 2015. Neither has raised many eyebrows, although the German reconnaissance aircraft is strategically pointless and the overall Mali operation has been both irresponsibly underresourced and lacking a plausible political strategy. On the other hand, the government is beginning to make its own strategic determinations. The pivotal example is Germany’s reluctance to send arms to Ukraine. That decision was in fact the result of a careful strategic assessment—one similar to that made by other Western experts who opposed the idea.

All told, while there is growing realism about the occasional necessity of violence, Germany is not on a path to “normalization,” if the norm is the traditional interventionism of Western major powers. Given Britons’ backlash to the Libya intervention and Macron’s own call for strategic restraint, it is in fact likelier than ever that a European strategic culture will emerge somewhere in the middle between French and British traditions on the one hand, and German traditions on the other. That, however, will require a major investment in strategic thinking—an investment that Germany’s parties cannot simply outsource to think tanks and bureaucrats, but that instead requires fresh debates about international security within political parties.

Philipp Rotmann is associate director at the Global Public Policy Institute (GPPi) in Berlin, where he leads the work on peace and security.

Image: German flag is seen outside the German lower house of parliament Bundestag before the election of a new chancellor in Berlin, Germany, March 14, 2018. REUTERS/Hannibal Hanschke