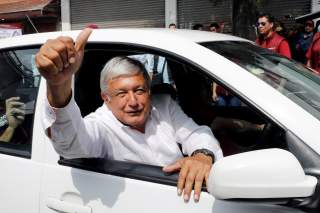 Less than a week before Mexico’s elections, there is little doubt who will be the next president. Barring any major development, leftist populist Andres Manuel Lopez Obrador (AMLO) is projected to win by a wide margin of 52 percent. In second place with 26 percent is Ricardo Anaya, representing a coalition of the center-leaning National Action Party (PAN) and leftist Democratic Revolutionary Party (PRD). Trailing in third is the ruling Institutional Revolutionary Party (PRI) candidate Antonio Meade, with only 19 percent.

This is not AMLO’s first time running for the presidency. Back in 2012, he lost to current president, Enrique Peña Nieto (EPN), by 7 points, and in 2006 by less than 1 percent, leading his followers to believe the election was stolen. At over 50 percent of the expected vote, there is little holding him back from moving into Los Pinos.

AMLO’s own statements have raised concerns about the future of Mexico under the populist leader. His aggressive stance against the free market have worried investors, who are delaying commitments. Likewise, his proposal to grant amnesty to drug traffickers raises concerns about U.S.-Mexico cooperation on countering crime and drugs.

His plan to combat corruption, a central tenet of his campaign, has yet to be announced even days before the election. He has a particular hostility towards the energy sector, and his vow to review all existing energy contracts is interpreted as a threat to the industry.

Yet AMLO’s popularity is soaring among the majority of Mexicans, who are tired of the two-ruling party’s inability to stem corruption, poverty and violence.

For seventy-one years, the PRI dominated Mexican politics and maintained power through patronage networks in both the public and private sector. The transition to the PAN in 2000 did little to correct the imbalances. Politicians maintained power sharing agreements with organized criminal groups, allowing both to flourish.

These practices remain common and embolden criminality. Fourteen current or former governors are under investigation for corruption, including one who embezzled $2 billion in public funds. In a country where nearly half of the 122 million people live in poverty—with 7.6 percent living in extreme poverty—the optics are unfortunate.

2017 was the most violent year in Mexico’s history, with 29,000 homicide victims, equal to 20 victims per 100,000 people. In the crime-ridden states of Colima and Guerrero, the numbers are far higher. Colima registers 93.6 homicides for every 100,000 people and 64.26 in Guerrero. In comparison, the U.S. homicide rate is 5 per every 100,000 citizens. The U.S. State Department advises U.S. citizens against travel to these states as “armed groups operate independently of the government in many areas of Guerrero.”

Despite numerous media reports, President Donald Trump and the U.S.-Mexico relationship is not a feature of these elections. Mexico’s election is solely driven by domestic factors. In some ways, there are parallels between AMLO’s rise and Trump’s election. While they are ideologically different, AMLO’s policies (much like Trump’s) resonate with a majority of voters who have been overlooked by the economic and political elite.

Mexicans see their government as caring more about their international image than serving their own people. While EPN promoted human rights and gender equality at international forums, domestic levels of violence continued surging. In September 2014, forty-three students were abducted and their remains buried by a criminal group working for a corrupt mayor. That case remains unsolved nearly four years later. In total, more than 30,000 Mexicans remain missing, and 100,000 were killed in the ongoing war against drugs.

In respect to the U.S.-Mexico relationship, while there is little indication that AMLO will be hostile to U.S. interests, we should expect bilateral cooperation to change. AMLO is a nationalist and focused on addressing domestic problems. The U.S. should anticipate a reduction in cooperation on regional challenges that don’t directly concern Mexico. We should expect Mexico to draw down their leadership on the Venezuela crisis, as AMLO’s foreign minister in waiting told me in a meeting.

U.S.-Mexico cooperation on immigration and addressing Central America’s challenges could potentially evolve as well. Considering bilateral cooperation on countering crime and drugs is in the Mexican interest, it should remain steady. AMLO’s perception on immigration could become a challenge for the Trump administration. If a new NAFTA deal is reached before he takes office in December, he has vowed to renegotiate it.

The stakes are high for whoever is elected on the first of July. Mexico’s spiraling violence and corruption have made the country unlivable for many. Regardless of who is elected, few things are more important for the U.S. and Mexico than maintaining strong ties.