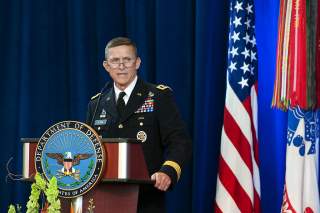 The United States is in real danger of losing the war on terror.

Over and over throughout the book, Flynn and Ledeen warn that the United States is losing the war against the evil alliance. “I’m totally convinced,” they summarize, “that without a proper sense of urgency, we will be eventually defeated, dominated, and very likely destroyed.” They devote a big chunk of the concluding chapter to a description of what exactly life would be like under the caliphate. And it is grim indeed.

How exactly the United States could possibly “lose” in any real way is another little detail left, shall we say, under-explained. Flynn and Ledeen apparently believe that not only is the Iranian regime a house of cards ready to tumble at the slightest push, but so is the United States.  Somehow we are one step away from an uncontrollable descent into Sharia and totalitarian despotism. Without decisive action, we are doomed to lose the war against the enemy alliance, fated to “be ruled by men who eagerly drink the blood of their dying enemies.” The book shies away from understatement.

Overall, General Flynn’s beliefs certainly appear to place him on the fringe of the foreign policy community. Realists can hope that he comes to realize that the most important role of the national security advisor is to run the process in a neutral fashion, to present the president with clear options for making decisions. If he sees his role otherwise, as a Machiavelli advising President Trump to enact policies that fit his worldview, then the United States – and the world – may well be in for a long, violent period in the years ahead.

Image: Army Lt. Gen. Michael T. Flynn speaks during the change of directorship for the Defense Intelligence Agency on Joint Base Anacostia-Bolling/United States Department of Defense​