Michael Flynn Seems to Finally Be Getting the Justice He Deserves 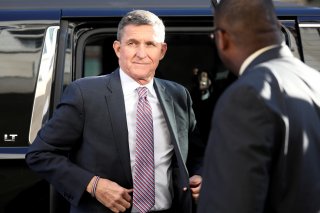 The plea agreement signed by Flynn, his lawyers, and the prosecutors explicitly states: “No agreements, promises, understandings, or representations have been made by the parties or their counsel other than those contained in writing herein, nor will any such agreements, promises, understandings, or representations be made unless committed to writing and signed by [Flynn], defense counsel, and the Special Counsel’s Office.”

But there are documents from Flynn’s former lawyers stating that “We have a lawyers’ unofficial understanding that they are unlikely to charge Junior in light of the Cooperation Agreement.”

They went on to say in other internal emails that “The government took pains not to give a promise to MTF regarding Michael Jr., so as to limit how much of a ‘benefit’ it would have to disclose as part of its Giglio disclosures to any defendant against whom MTF may one day testify.”

If true, prosecutors were being too cute by half.

The only reason we know about this potential side deal is because Flynn’s new lawyers filed these excerpts after the old firm turned over sixty-eight hundred new documents it had inadvertently failed to give Flynn’s new counsel.

Particularly problematic for Flynn’s former lawyers was the Justice Department’s threat to prosecute Flynn and his son for FARA violations unless Flynn agreed to plead guilty to lying to federal agents. Why was this problematic for the former lawyers? They were the lawyers who advised Flynn and his son about what needed to be disclosed to the government in the FARA filing.

If the government was truly concerned about, and was considering filing criminal charges related to, the FARA filings, then it certainly would have been examining the conduct of the lawyers who prepared those filings, the very same lawyers who were representing Flynn in his criminal case. Is it reasonable to believe that the Covington lawyers, who themselves were at risk of potential malpractice claims, bad publicity, or worse related to this uncharged conduct, should have been allowed to continue advising Flynn about how to respond to the charges that were pending against him, especially when they must have known that everything could be quickly and quietly resolved if he simply pleads guilty to one count of lying to federal agents?

It’s a lot to ask of anyone, and it certainly raises serious questions about whether a conflict of interest—waivable or not—existed between Flynn and his original lawyers. Regardless, Flynn claims that his lawyers did not discuss any of this. But he was certainly entitled to know this before deciding whether to stick with his original lawyers or to seek advice, as he ultimately did, perhaps too late, from conflict-free counsel.

Such allegations are shocking to hear about a prominent, well-respected, white-shoe, Washington, DC firm.

They’re troubling, as are the allegations that Flynn’s former lawyers spurned offers of congressional immunity for Flynn in exchange for his testimony without informing Flynn.

If true, then that would be a textbook example of ineffective assistance of counsel and a breach of ethical duties. Lawyers are duty-bound to discuss all plea and immunity offers with their clients—and common sense dictates it. It is the client, not the lawyer, who must make the final decision on any such offers.

The perception is that Flynn was treated unfairly during the investigation and his prosecution—maybe even railroaded during the process.

DOJ now recognizes this and seeks to dismiss its charges against Flynn because “[u]nder these circumstances, the Government cannot explain, much less prove to a jury beyond a reasonable doubt [which prosecutors must believe they can do even when a defendant pleads guilty], how false statements are ‘material’ to an investigation that—as explained above—seems to have been undertaken only to elicit [Flynn’s] false statements and thereby criminalize Mr. Flynn.”

While acknowledging that Flynn had previously pleaded guilty, the government adds that “he did so without full awareness of the circumstances of the newly discovered, disclosed, or declassified information as to the FBI’s investigation of him.” The government added that it has no “interest in penalizing a defendant for a crime that it is not satisfied occurred.”

One thing is certain, Michael Flynn—and the American people—expect and deserve more from our system of justice.

We must now wait for the judge to rule on the government’s motion to dismiss its charges against Flynn. Given the admissions the Justice Department makes in its motion, it would be a miscarriage of justice if the judge refused to grant the dismissal.

In any event, we would do well to remember the words of then-Attorney General Robert Jackson, who in a speech to U.S. attorneys nearly eighty years ago, could have been warning us today against prosecutions such Flynn’s:

If the prosecutor is obliged to choose his cases, it follows that he can choose his defendants. Therein is the most dangerous power of the prosecutor: that he will pick people that he thinks he should get, rather than pick cases that need to be prosecuted. With the law books filled with a great assortment of crimes, a prosecutor stands a fair chance of finding at least a technical violation of some act on the part of almost anyone. In such a case, it is not a question of discovering the commission of a crime and then looking for the man who has committed it, it is a question of picking the man and then searching the law books, or putting investigators to work, to pin some offense on him. It is this realm in which the prosecutor picks some person whom he dislikes or desires to embarrass, or selects some group of unpopular persons and then looks for an offense, that the greatest danger of abuse of prosecuting power lies. It is here that law enforcement becomes personal, and the real crime becomes that of being unpopular with the predominant or governing group, being attached to the wrong political views, or being personally obnoxious to or in the way of the prosecutor himself.