The Middle East and the Manipulation of Great Power Competition 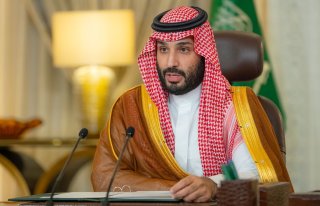 The subject of America’s commitments to the Middle East has garnered a great deal of attention following Russia’s invasion of Ukraine and the hedging of U.S. regional partners concerning things such as condemning Russian aggression, maintaining current levels of oil output, and so on. There has been a litany of analyses published in the past several weeks arguing for the United States to “recommit“ to the region, arguing that it is Washington’s responsibility to re-mend these relationships. A recent op-ed for the Wall Street Journal stated that the United States must bolster the “confidence in the strength of American resolve” among its regional partners, which entails a willingness to use “force and intimidation as tools of diplomacy.” If America does not, others have argued, competitors such as China will benefit strategically at its expense. Likewise, U.S. regional partners have been advancing a narrative that these tensions are ultimately a result of Washington’s actions. This has been coupled with calls by these actors for the United States to increase its security commitment to the region, culminating in Saudi Arabia and the United Arab Emirates (UAE) requesting a formal defense treaty with the United States, or risk these states turning more toward Moscow and Beijing. Former Secretary of State Mike Pompeo penned an article shortly after reports of these requests were made public, arguing for America to embrace these states “as the allies they wish to be,” lest we cede this ground to Russia or China.

No such mutual defense pact exists between the United States and these Middle East countries as it does between America and its formal treaty allies in Europe and East Asia. Undoubtedly, the main reason these states desire a more formal commitment is that, if codified into law, unwavering U.S. support would be guaranteed regardless of which political party is in power in Washington. Further, such support would persist despite America’s “pivot” to Europe and East Asia. Yet, such a commitment is certainly not in the best interests of the United States. Not only does it risk entrapping the United States in these countries’ behavior, but such a commitment would formalize America’s commitment to the underlying source of instability in the Middle East: the authoritarian status quo.

Washington must fundamentally rethink its approach to the Middle East as the United States enters into a new era of great power competition with Russia and China. Instead of an authentic risk that these countries are turning to Moscow or Beijing as their primary security guarantors or turning against the United States, what we are witnessing is the manipulation of great power politics by these actors in the hopes of gaining concessions by exploiting Washington’s fears of losing its relative position to Russia or China. A formalized security commitment is the ultimate concession they could obtain. Moreover, the United States must recognize that its historic support for these autocratic actors has been dramatically counterproductive to its own interests, allowing these states to act with impunity at home and abroad.

The return of great power competition to the Middle East—and the reemergence of global multipolarity more generally—is now one of the most commonly cited reasons why the United States must remain deeply engaged in the region. The Pentagon has raised concern over China and Russia’s expanding presence in the Middle East, and Washington has increasingly pressured its regional partners over their engagements with Beijing and Moscow, albeit to little avail. Brett McGurk, the current White House coordinator for the Middle East and North Africa, argues that these partnerships provide the United States with a “unique comparative advantage” compared to its great power competitors in the region. These officials’ messaging strikes a common theme: the more the United States pulls away from the Middle East and its regional partners, the more Russia and China will seek to fill the void. America’s regional partners have expressed a similar sentiment, arguing that continued strong support from the United States allows Washington to offshore much of its “regional burden” while seeking to strategically pivot away from the Middle East, while simultaneously threatening to “turn elsewhere” if such support is jeopardized.

Without a doubt, both Russia and China have considerably expanded their presence in the Middle East over the past decade. Yet, neither Russia nor China are capable of filling an American “void” in the Middle East, nor do they desire to. As I have argued before, Russia and China benefit from the U.S.-led security order in the Middle East—they are opportunists, not revisionists—and neither of them are capable or willing to construct and uphold a new political and security order in the region. As the American experience in the Middle East has shown, a regional order upheld by an external hegemon requires an enormous amount of political, economic, and military resources. Both Russia and China are facing considerable economic troubles at home, particularly Moscow after its disastrous invasion of neighboring Ukraine. Moscow and Beijing are also undermined by the authoritarian nature of their own governments, needing to commit vast amounts of resources to internal policing in order to maintain their own authority. Moreover, many of the advances Russia and China have made in the Middle East are due to the fact that they have compartmentalized their foreign policies in the region. Their ability to refrain from taking sides in the region’s many geopolitical competitions would be severely undercut if the region’s security guarantor, the United States, abdicated. Regional states are well are of the limitations facing Russia and China and do not view them as viable alternatives to Washington: instead, they have sought to manipulate the return of great power competition in order to advance their own strategic objectives. Indeed, America’s autocratic partners in the region have sought to manipulate Washington’s anxiety about losing its position relative to Russia China, resulting in a type of “reverse leverage.”

It is within this broader context that the actions of these regional actors following Russia’s invasion of Ukraine—arguably the most significant conflict thus far in the newest era of great power competition—must be situated. The actions of our Middle East partners since the invasion have been telling. First was the decision by the United Arab Emirates to abstain—alongside China and India—from a UN Security Council (UNSC) draft resolution condemning Moscow’s invasion of Ukraine. Anwar Gargash, former minister of state for Foreign Affairs and current advisor to Emirati leadership, explained that the UAE will not take sides in the conflict, stating that it would “only lead to more violence.” In return for their abstention, Russia joined with the UAE in a UNSC vote to designate Yemen’s Houthi movement as a terrorist organization. Shortly following Abu Dhabi’s abstention, Russia’s Ministry of Foreign Affairs highlighted its strong relationship with the UAE. During a visit to Moscow, the UAE’s foreign minister expressed his desire to continue cooperating with Russia on energy-related matters. Additionally, as Russia’s many oligarchs are facing waves of sanctions coming from the West, they have increasingly attempted to shift their money and assets to the UAE in order to avoid such sanctions. Russian officials and businessmen close to Vladimir Putin already maintain considerable assets in the UAE, which has so far refused to enforce sanctions and has experienced record housing sales driven in part by Russian demand.

America’s Middle East partners have also balked at Washington’s requests for them to increase oil output as prices skyrocket globally. Saudi and Emirati leaders reportedly declined calls with President Joe Biden, signaling that they will not help with rising oil prices unless Washington grants them concessions. Both Saudi Arabia and the UAE have stressed the importance of continuing to coordinate with Russia on oil. Amidst tensions with Washington, Saudi Arabia recently invited Chinese president Xi Jinping to visit Riyadh, and the kingdom is reportedly in talks with Beijing to accept Chinese yuan instead of U.S. dollars for oil sales.

Yet, despite claims that America has increasingly “abandoned“ the region, U.S. Middle East policy under Biden has been one rooted in continuity, not change. Biden refused to hold Saudi crown prince Mohammed bin Salman (MbS) accountable for the murder of journalist Jamal Khashoggi despite the released CIA report directly implicating MbS in his murder; has continued to support Saudi Arabia and the UAE amidst their disastrous military campaign in Yemen and plunging the country into a humanitarian crisis; and has refused to hold states such as Saudi Arabia, Egypt, the UAE, and others responsible for their prolific use of surveillance and hacking technology on their own populations as well as dissidents, journalists, and politicians abroad.

The Biden administration has also continued to pour military aid and advanced weaponry into the region, announcing that it intended to proceed with the $23 billion weapons sale (including the F-35 fighter jet) to the UAE that was initially approved under the Trump administration in return for Abu Dhabi normalizing relations with Israel; approving a $650 million arms package to Saudi Arabia; transferring a significant number of Patriot anti-missile systems to Saudi Arabia; authorizing an additional $2.5 billion in arms sales to Egypt; and approving a weapons package worth nearly $5 billion to Jordan, Saudi Arabia, and the UAE. This is in addition to deploying F-22 fighter jets and a naval destroyer to the UAE following a recent missile attack launched by the Houthi movement in Yemen. In the period following Russia’s invasion of Ukraine, the United States has continued to reassure these actors of Washington’s support for their security; Secretary of State Antony Blinken apologized to the Crown Prince of Abu Dhabi Mohammed bin Zayed for America’s response to the Houthis’ attacks on the Emirates; the director of the Central Intelligence Agency, William Burns, traveled to Saudi Arabia to meet with MbS to “repair ties”; and a new multinational naval task force was established to patrol the strategic waterways surrounding Yemen, designed in part to cut off weapons supplies to the Houthis.