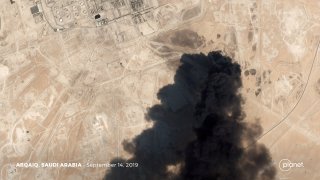 An oil facility in eastern Saudi Arabia burst into flames on Saturday, sending oil prices and tensions in the Middle East skyrocketing. After it became clear that the explosions were the result of an attack, all the fingers have been pointing at Iran and its allies—and there is talk of an armed response.

The explosions tore apart a processing facility in Abqaiq, halting over half of Saudi Arabia’s daily oil exports and one twentieth of all oil production in the world. The price of both crude oil and consumer gasoline jumped by around 10 percent in the United States.

Houthi rebels in Yemen, whom Iran supports in the war against the Saudi-backed government, claimed to have carried out the attack with drones. If so, then the attack may have been retaliation for a Saudi airstrike on a Houthi prisoner of war camp two weeks ago, which killed dozens of people, observed Trita Parsi, executive vice president at The Quincy Institute for Responsible Statecraft.

“U.S. media doesn’t cover this stuff, so whenever the Houthis do something, it sounds like an escalation,” Parsi told the National Interest.

But the United States and Saudi Arabia almost immediately began to cast doubt on the official Houthi line.

Officials at Aramco, the Saudi state oil company, said that the attack came from missiles rather than drones. Unverified images showing pieces of an Iranian-made Jerusalem-1 cruise missile in the Saudi desert began to circulate, adding weight to Aramco’s story.

Speculation began to swirl around where the origin of the attack. On Monday, Saudi officials said that they believe “Iranian weapons” were used in the attack. Anonymous U.S. officials even told ABC News—without providing evidence—that the missiles were actually fired from Iranian soil.

For now, the only solid evidence seems to be satellite photos showing seventeen puncture marks on the damaged oil facility. Because the marks were to the north, U.S. officials told the New York Times that the missiles could not have been launched from Yemen.

Retired Lt. Col. Daniel L. Davis pointed out that the puncture marks do not actually show the origin of the attack. “Missiles can fly from almost anywhere. They have the ability to maneuver! And certainly drones can, too,” the Defense Priorities senior fellow told the National Interest. “There hasn’t been the time to do an actual analysis on the ground, so let’s wait and see.”

Mark Latham, managing partner at the London-based analysis firm Commodities Intelligence, told the National Interest that the puncture marks pointed to a cruise missile with no explosive warhead. Removing the payload would allow the missile to carry more fuel and launch from farther away from its target.

“The culprit behind the Abqaiq attack is most definitely the Islamic Republic, either directly or through one of its proxies,” argued Varsha Koduvayur, a senior research analyst at the Foundation for the Defense of Democracies.

“The attack fits the pattern of Iran signaling to the Gulf states that if it can’t get its oil out, it will cause their oil exports to become collateral damage,” Koduvayur told the National Interest. “It’s because of how strong our coercive financial tools are that Iran is resorting to attacks like this: it’s lashing out.”

Violating an Obama-era agreement to regulate Iran’s nuclear research program, the Trump administration imposed massive sanctions on Iran’s oil industry beginning in May 2018. The goal of this “maximum pressure” campaign was to force Iran to accept a “better” deal. Since then, Iranian forces have captured a British oil tanker and allegedly sabotaged tankers from other countries.

There were some signals that Trump was planning to use the ongoing United Nations General Assembly in New York to open a new diplomatic channel with Iran, especially after the firing of hawkish National Security Advisor John Bolton. But the weekend attack sent Trump into reverse.

“Remember when Iran shot down a drone, saying knowingly that it was in their ‘airspace’ when, in fact, it was nowhere close. They stuck strongly to that story knowing that it was a very big lie,” he said in a Monday morning Twitter post, referring to a June incident when Iranian and American forces almost went to war. “Now they say that they had nothing to do with the attack on Saudi Arabia. We’ll see?”

He also hinted at a violent U.S. response.

“There is reason to believe that we know the culprit, are locked and loaded depending on verification, but are waiting to hear from the Kingdom as to who they believe was the cause of this attack, and under what terms we would proceed!” Trump wrote on Sunday.

“Saudi Arabia is not a formal treaty ally of ours, so there are no international agreements that obligate us to come to their defense,” John Glaser, director of foreign-policy studies at the CATO Institute, stated. “This does not amount to a clear and present danger to the United States, so no self-defense justification is relevant. He would therefore need authorization from Congress.”

Members of the Senate Foreign Relations Committee had mixed reactions to the attack.

Sen. Lindsey Graham (R-S.C.) proposed putting “on the table an attack on Iranian oil refineries” in order to “break the regime’s back.” His press office did not respond to a follow-up question from the National Interest asking whether the president would have the authority to do so.

Amy Grappone, spokeswoman for Sen. Todd Young (R-Ind.), told the National Interest that the Senator “will support an appropriate and proportionate response” after “studying the latest intelligence pertaining to Iran’s malign activities, including these recent attacks in Saudi Arabia.”

Sen. Bob Menendez (D-N.J.), the ranking Democrat on the committee, condemned the attack with a backhanded insult towards Saudi Arabia. “Despite some ongoing policy differences with the kingdom, no nation should be subjected to these kinds of attacks on it soil and against its people,” he wrote on Twitter, declining to name Iran as the culprit.

“Diplomacy by Twitter has not worked so far and it surely is not working with Iran. The president needs to stop threatening military strikes via social media,” said Sen. Ben Cardin (D-Mary.) in response to a question from the National Interest. “The attack on Saudi Arabia is troubling whether it was perpetrated by Houthi rebels or Iran. The U.S. should regain its leadership by working with our allies to isolate Iran for its belligerent actions in the region.”

“The U.S. should not be looking for any opportunity to start a dangerous and costly war with Iran. Congress has not authorized war against Iran and we’ve made it crystal clear that Saudi Arabia needs to withdraw from Yemen,” he continued.

Asked how he would vote on a declaration of war, the senator told the National Interest: “Let’s hope it does not come to that. Congress has not authorized war against Iran. The majority voted to engage them diplomatically to slow their nuclear ambitions. The international community is ready to work with the U.S. again to ease economic pressure on Iran in exchange for their restraint. We are at a dangerous precipice.”

In a statement emailed to the National Interest and posted to Twitter, Sen. Tim Kaine (D-Va.) was even more direct: “The US should never go to war to protect Saudi oil.”

Sen. Chris Murphy (D-Conn.) has long been a critic of Saudi Arabia’s war in Yemen, proposing a successful bill to cut off U.S. support for the Saudi-led war effort. (He did not have enough votes to override the veto.) After the attacks, he wrote a long Twitter thread explaining how “the Saudis sowed the seeds of this mess” in Yemen.

“It’s simply amazing how the Saudis call all our shots these days. We don’t have a mutual defense alliance with KSA, for good reason. We shouldn’t pretend we do,” Murphy added. “And frankly, no matter where this latest drone strike was launched from, there is no short or long term upside to the U.S. military getting more deeply involved in the growing regional contest between the Saudis and Iranians.”

But the reaction did not fall neatly along party lines.

“Iran is one of the most dangerous state sponsors of terrorism. This may well be the thing that calls for military action against Iran, if that’s what the intelligence supports,” said Sen. Chris Coons (D-Del.) in a Monday interview with Fox News.