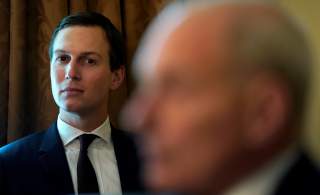 Most observers who are not affiliated with the Trump administration—and privately some who are—have concluded that the recent “workshop” in Bahrain was at worst a public relations exercise and at best an opportunity for contacts between Israeli and Gulf businesspeople. Nothing was really going to come of the workshop for the simple reason that the Palestinian grievance is political, not economic, and the Arab world, while often merely paying it lip service, is simply not prepared to walk away from the Palestinian cause.

Yet even in the sphere of nongovernmental relations, the workshop really did not amount to very much. On the one hand, as a leading Arab businessman from a Middle Eastern state who attended the conference indicated to me, it was “a weak conference. Nothing can be done through this unilateral approach. [Former British prime minister] Tony Blair [who spoke at the workshop] was clear. We cannot talk about any economic plan before resolving the essential: the political issue.” And this came from a businessman who has visited Israel quite often. On the other hand, the Gulf is already choc-a-block with Israeli businessmen, who usually travel using their second passports—British, American, Canadian, whatever.

Much fuss was made over the fact that there was a Sabbath service in Bahrain. Yet services whose participants are predominantly, if not solely, Israeli have been conducted elsewhere in the Gulf for some time. Indeed, an American rabbi is soon to become part-time leader of one of these expatriate Jewish congregations. In other words, even the fact of a Jewish service in connection with the workshop was in fact no big deal.

It is not surprising that the Trump administration has ballyhooed the workshop. Jared Kushner and his Sancho Panza, the American peace negotiator Jason Greenblatt, have been gestating their “deal of the century” for the better part of three years. They need to show something, anything, for their efforts.

There is little doubt that, given their druthers, the Gulf states would be perfectly content to maintain open relations with Israel. As Bahrain’s long-time foreign minister, Sheikh Khalid bin Hamad al-Khalifa told an Israeli journalist—on the record, no less—“we do believe that Israel is a country to stay, and we want better relations with it, and we want peace with it.” Since the Bahrainis rarely do or say anything without the tacit support of Riyadh, it is clear that the Saudis feel the same way—no surprise given Crown Prince Mohammed bin Salman’s close relationship with Kushner.

Yet Sheikh Khalid added a critical proviso—namely, that Israel needed to negotiate with the Palestinians on the basis of the Arab Peace Initiative, first announced in 2002 and re-endorsed in 2007. This calls for the Jewish state’s return to the 1967 lines and the creation of a Palestinian state with its capital in East Jerusalem. Not coincidentally, the API, as it is called, was first promulgated by the then Saudi king Abdullah bin Abdulaziz al Saud . Thus, while Sheikh Khalid is sincere about developing open relations with Israel—a matter that in the past he only has opined on in private, he, like his Saudi neighbor across the causeway, is equally committed to the political proviso that Kushner simply refuses to address.

It is not clear whom Jared Kushner is attempting to fool. It is surely not Benjamin Netanyahu, who is more interested in annexing of parts of the West Bank than granting it independence. Nor is it the Palestinians, for whom a separate state is far more important than an increase in Gross Domestic Product. Nor is it the Arab states, who see right through his ploy. Perhaps, in the end, Kushner is fooling no one but himself.