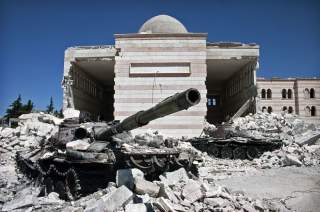 For over three years, the United States has sought to overthrow Syrian President Bashar al-Assad by supporting an Al Qaeda-infused opposition that Washington either knew or should have known would fail. Yet, in his commencement address at West Point on Wednesday, President Obama promised the American people and the rest of the world more of the same.

Obama’s vague pledge to “ramp up” support for selected oppositionists is a craven sop to those claiming that U.S. backing for the opposition so far—nonlethal aid, training opposition fighters, coordination with other countries openly providing lethal aid, and high-level political backing (including three years of public demands from Obama that Assad “must go”)—has been inadequate, and that Assad could be removed if only America would do more. This claim should be decisively rejected as a basis for policy making, rather than disingenuously humored, for it is dangerously detached from reality.

From the start of the conflict, it has been clear that the constituencies supporting Assad and his government—including not just Christians and non-Sunni Muslims but also non-Islamist Sunnis—add up to well over half of Syrian society. These constituencies believe (for compelling historical reasons) that the alternative to Assad’s regime will not be anything approximating a secular, liberal democracy; it will be some version of Sunni Islamist rule. As a result, since the start of the conflict in March 2011, polling data, participation in the February 2012 referendum on a new constitution, participation in May 2012 parliamentary elections, and other evidence have consistently shown a majority of Syrians continuing to back Assad.

Conversely, there is no polling or other evidence suggesting that anywhere close to a majority of Syrians wants Assad replaced by some part of the opposition. Indeed, the opposition’s popularity appears to be declining as oppositionists become ever more deeply divided and ever more dominated inside Syria by Al Qaeda-like jihadis. Just last year, NATO estimated that popular support for the opposition may have shrunk to as low as 10 percent of the Syrian public.

These readily observable realities notwithstanding, the Obama administration, most of America’s political class, and the mainstream media all jumped on, and have stayed with, a fantastical narrative about cadres of Syrian democrats ready, if just given the tools, to take down a brutal dictator lacking any vestige of legitimacy. The administration, for its part, embraced this narrative largely because it desperately wanted to undermine Iran’s regional position by destabilizing Assad and his government. In 2012, Obama compounded his fatally flawed choice by setting his infamous “redline” regarding chemical-weapons use in Syria—ignoring the potentially catastrophic risk that this would incentivize rebels to launch “false flag” chemical attacks, precisely to elicit U.S. strikes against the Syrian military.

The consequences of crafting policy on the basis of such a surreal distortion of political reality in Syria and of strategic reality across the Middle East have, not surprisingly, been dismal.

Given that the popular base for opposition to Assad is too small to sustain a campaign that might actually bring down his government, it was utterly predictable that external support for armed oppositionists could only translate into death and existential distress for Syrians. Over 150,000 have been killed so far in fighting between opposition and government forces, with millions more displaced. How many more Syrians need to die before Washington rethinks its policy?

Supporting an armed challenge to Assad was also bound to invigorate Al Qaeda and dramatically escalate sectarian violence. Well before March 2011, it was evident that, among Syria’s Sunni Islamist constituencies, the Muslim Brotherhood—whose Syrian branch was historically more radical and violent than most Brotherhood elements—was being displaced by more extreme, Al Qaeda-like groups. External support for anti-Assad forces after March 2011 both accelerated this trend and reinforced it with an infusion of foreign jihadis at least partially financed by Saudi Arabia and other Gulf Arab American allies. The U.S. Intelligence Community estimates that 26,000 “extremists” are now fighting in Syria, more than 7,000 from outside the country. U.S. Director of National Intelligence James Clapper warns that many of these militants want not just to bring down Assad; they are preparing to attack Western interests—including the American homeland—directly. It is hard to imagine a more dysfunctional outcome for U.S. interests.

Likewise, picking the losing side in Syria’s externally-fueled civil war has further eroded American standing and influence in the Middle East and globally. Most notably, Washington’s Syria policy has contributed substantially to the ongoing polarization of Western relations with Russia and China. In particular, the Obama administration’s declared determination to oust Assad has prompted much closer Sino-Russian cooperation to thwart what both Moscow and Beijing see as an ongoing campaign to usurp the Middle East’s balance of power by overthrowing regional governments unwilling to subordinate their foreign policies to Washington’s preferences. This collaboration, in turn, has helped to bring Russia and China into broader geopolitical alignment, deliberately working to turn a post–Cold War world defined by overwhelming U.S. hegemony into a more genuinely multipolar order—the opposite of what U.S. policy should be trying to achieve.

The Syrian conflict will end in one of two ways. In one scenario, the Assad government continues to extend and consolidate its military gains against opposition forces. Over time, opposition elements make their peace with the government, in piecemeal fashion. However, because of ongoing external support, enough opposition groups are able to keep fighting that significant portions of Syria’s population will continue to face serious humanitarian and security challenges for several more years. In the alternative scenario, the main external supporters of the opposition (the United States, Britain and France, Saudi Arabia and other Gulf Arab states, Turkey) and of the Assad government (Russia, China, Iran) pursue serious diplomacy aimed at helping the government and those opposition elements with some measure of genuine support in Syria reach a political settlement based on power sharing.

The current trajectory of U.S. policy makes the first scenario—with the unnecessary deaths of more Syrians, further revitalization of Al Qaeda, and continued erosion of America’s strategic position—virtually inevitable. The second scenario happens to be favored by Russia, China, Iran, and even the Assad government; it is also, far and away, the morally and strategically preferable scenario as far as America’s real, long-term interests are concerned. But shifting from the first scenario to the second will require fundamental changes in America’s Syria policy.

Above all, U.S. officials need to recognize—and to act as if they recognize—that serious diplomacy means engagement with all relevant parties (even those Washington does not like), with such engagement informed by an accurate understanding of on-the-ground reality (rather than wishful thinking). For Syria, this means acknowledging that resolving the conflict there will require the United States to come to terms with a Syrian government still headed by President Bashar al-Assad.

Flynt Leverett is professor of international affairs and law at Penn State.

Hillary Mann Leverett is senior professorial lecturer at American University’s School of International Service. Their book, Going to Tehran: Why America Must Accept the Islamic Republic of Iran, is now in paperback.