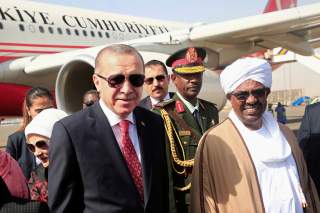 Turkey’s main success has been in Sudan. On November 20, Turkey and Sudan signed a wide-ranging series of bilateral deals for cooperation in agriculture, energy, transport and aviation, according to Hurriyet. They came during a visit by Turkey’s vice president Fuat Oktay to Khartoum in which he hoped to boost trade from $500 million to $10 billion in five years. Oktay also spoke to Sudan about defense cooperation. A massive agriculture investment in 780,000 hectares was also announced.

Turkey has also been investing heavily in Suakin island on the Red Sea since Erdogan visited Sudan in December 2017 and agreed to restore and invest in the historic port. Qatar was also part of the deal that could involve the investment billions of dollars in Suakin through 2020. The Turkish investment is supposed to refurbish the area for tourism and develop port facilities for civilian and military use.

The military aspect of Turkey’s role in Sudan was discussed during a visit by Defense Minister Hulusi Akar in early November to Suakin. According to Ankara’s Anadolu news agency “Turkey’s plan to open military training centers in Sudan was among the topics discussed.” Yasin Aktay, who is close to Erdogan, wrote in Yeni Safak on November 10 that the trip by Akar, which included Libya and Somalia, “had great significance.” In Somalia, Akar said that Turkey was an “important supporter of the regional and global peace and stability,” emphasizing that Turkey operates the only modern military training facility in the country.

The increasing involvement in the Horn of Africa by Turkey, the UAE, Qatar and Saudi Arabia has several important implications. Each visit and bilateral agreement tend to have repercussions with neighboring countries. For instance the UAE’s links to Somaliland affect its relations with Somalia and Djibouti. Turkey’s role in Sudan impacts Sudan’s relations with Egypt, where strained relations have resulted. Turkey sees itself as carving out a new relationship with Africa, as evidenced by Erdogan’s frequent trips and visits by many other senior officials. Turkey’s influence is also multi-layered, including cultural ties, economic investment and, in Sudan and Somalia, increasing military-to-military connections. Turkey will tread carefully, especially in regard to any naval facilities on the Red Sea. But it will also increase its clout in the region. Advisors to Erdogan clearly see this as an important step.

Were it not for the Yemen war and the Gulf crisis between Qatar and its neighbors, the increasing investment in the Horn of Africa would join other countries, such as China, whose investment is seen as more economic strategy than military and political strategy. The Yemen crisis has increased the militarization of the Horn, including more modern military facilities. This bypasses the existing infrastructure of the United States, western countries and the African Union that was aimed at combating piracy and terror. It represents a departure from the United States and western states playing a major role in the regional security framework, and a shift towards Turkey, Saudi Arabia, the UAE and Qatar playing a central role. That was clear in the Ethiopia-Eritrea peace agreement and the unprecedented investments now being made in Berbera and Suakin ports.

The potential for developing conflict is seen as a regional concern, especially by Turkish commentators. UAE commentators tend to be tighter lipped or stress either humanitarian and economic issues, as opposed to larger strategies and influence building. Turkish journalist Ibrahim Tigli claims that the UAE’s role will “lead to moves striking a blow to Turkey’s humanitarian policy” and that the UAE is working with the United States, UK, Israel, Saudi Arabia and Egypt. He argues that Turkey’s growing role means “Turkey has become a country which is listened to in the region” and that this could lead to Ankara being an intermediary in ending the Yemen war. With Yemen peace talks scheduled for December and a push for a ceasefire, the Turkish role and its influence in the Horn of Africa is essential to understanding its view of the interconnected Africa-Middle East connection. The UN envoy to Yemen, Martin Griffiths, was in Hodeidah on November 23 to seek a way to end the conflict. It is a conflict that has deeply affected the neighboring African states and will continue to play out across the Red Sea.