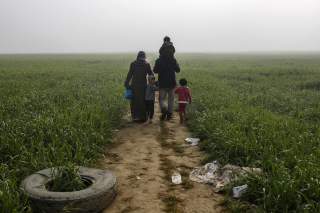 But because of the vociferous international condemnation it inevitably provokes, this type of conflict is only likely to occur in relatively obscure parts of the world, and at moments when events elsewhere distract international attention. Otherwise, a more likely outcome is an intelligence-led war against elements within a refugee population, comparable to Soviet spies assassinating émigrés during the Cold War.

Tension might also arise if one country demands the repatriation of any number of its civilians who have fled for the sanctuary of another. Such tensions are nothing new, and have previously arisen not only between countries of origin and destination but, on occasion, with third parties too. After the 1848 revolutions in Europe, for example, the fate of Hungarian and Polish exiles, whom the Russian government wanted to extradite from Turkey, became a cause célèbre in Britain. However, such international tensions are likely to become more frequent in the years ahead and may conceivably erupt into confrontation. The most obvious single example was the American invasion of Afghanistan in 2001, after the Taliban regime refused to hand over its “guest,” Osama bin Laden.

There may also be occasional circumstances in which mass migration will prompt states not to fight against each other, but to join forces and wage a collective war against innocent refugees. During the Rohingya migrant crisis of August and September 2017, for example, Sheikh Hasina’s secular Awami League government in Bangladesh proposed joint military operations with Myanmar against Rohingya insurgents. But such a campaign—where innocents are extremely difficult to distinguish from militants—could easily spiral into a wider war against all Rohingya refugees.

Finally, the phenomenon of mass migration may spark armed clashes between states and activists that act—or claim to act—either on behalf of migrants or, in some cases, to defend their own homeland from migrants. In the summer of 2017, for example, a far-right German group, “Defend Europe,” sent a vessel into the Mediterranean to confront refugee boats and send them “back to Africa.” Such clashes, which could also erupt between activists, are of course not likely to be sustained or large-scale, but could be brief and bloody. The violence at Calais in 2016 was orchestrated by activists who confronted the police, while in August 2017 the Libyan authorities expressly warned ngos that had been helping some refugee boats in crossing the Mediterranean to steer clear of its territorial waters. The low-level clashes that could erupt between states and activists are exemplified by the tension between the French government and Greenpeace in the 1970s and 1980s over the issue of nuclear testing in the South Pacific. French warships harassed Greenpeace vessels, and on occasion used violence: French commandos stormed aboard Vega in 1973, for example, to seize its equipment and, in a notorious case in July 1985, used explosives to sink the Rainbow Warrior.

However, such low-level clashes could also spark a more serious type of confrontation if, in the process, one government is deemed responsible for injuring or killing foreign nationals. This would certainly create very serious political tension, just as the Rainbow Warrior incident provoked a loud chorus of excoriation from across the world, particularly from the two governments that represented the Dutch-Portuguese activist who was killed in the bombing. Another example was the tension between Tel Aviv and Ankara that followed Israel’s attack on the “Gaza Peace Flotilla” in May 2010, which led to the deaths of ten activists. However, it could in some circumstances also trigger war, just as in August 1998, the death of eleven Iranian diplomats in Afghanistan came perilously close to sparking a full-scale conflict between Iran and the Taliban.

The new migration phenomenon, in other words, is not just a humanitarian tragedy, but it also threatens to destabilize whole regions of the world in far-reaching ways. This means that it is imperative for every country—in the developing as well as the developed world—not just to manage the flow of people, but to tackle the causes of the migration problem at their source. More attention must focus on the phenomenon’s root causes, whether it is attributed to war, corruption or population growth. The ongoing situation in Myanmar, where discrimination against Rohingya remains institutionalized, also illustrates the dangers of injustice. More radical, drastic solutions will need to be considered. The consequences of inaction will be profound for all; the new age of migration wars has already begun.

R. T. Howard is the author, most recently, of Power and Glory: France’s Secret Wars with Britain and America 1945–2016, as well as several other books on defense and international relations.

Image: A family walks through a field at a makeshift camp for migrants and refugees at the Greek-Macedonian border near the village of Idomeni, Greece, April 4, 2016. Reuters/Marko Djurica​