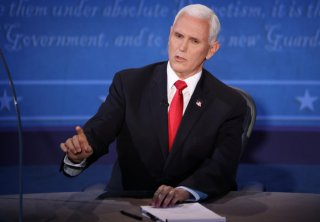 With President Donald Trump pulling advertising from Iowa, Michigan, and Ohio, lagging badly in the polls—a new Fox poll has him 10 points behind Joe Biden—and declaring that it was a “blessing from God” that he contracted the coronavirus, Vice President Mike Pence might have tried to land a knockout blow against Kamala Harris during their debate in Salt Lake City. Instead, he did nothing of the kind. Both candidates were evasive on most of the big issues and avoided any major gaffes. The debate is unlikely to have any political effect on the race itself.

Pence has long been Trump’s most stalwart champion, but he made no real effort to defend his record. His closing statement did not even refer to Trump. A savvy politician, he bobbed and weaved on issues such as climate change. He came back with a strong riposte when Harris accused the Trump administration of trying to pilfer the election, declaring that Democrats had refused to accept the results of the last one: “When you talk about accepting the outcome of the election, I must tell you, senator, your party has spent the last three-and-a-half years trying to overturn the results of the last election. It's amazing.” He also tried to turn the tables on Harris when it came to China and trade: “Lost the trade war with China? Joe Biden never fought it. Joe Biden has been a cheerleader for China for the last several decades.” Harris never mentioned that the U.S. trade deficit reached a fourteen-year high in August at $83 billion. Perhaps Pence’s most vigorous comeback was when he went after Biden and Harris on the issue of taxes, claiming that they would raise them in the form of repealing the Trump tax cuts, no matter what Biden claims about not increasing them on earners making less than $400,000 a year.

When it came to the coronavirus pandemic, Pence was at his weakest. Harris declared with metronomic regularity that the administration was responsible for the deaths of over 210,000 Americans. She stated that the administration’s response was “the greatest failure of any presidential administration in the history of our country.” She added, “Here's the thing. On January 28, the vice president and the president were informed about the nature of this pandemic. They knew and they covered it up. The president said it was a hoax. They minimized the seriousness of it.” Pence’s only reply was to retreat to claiming that Trump had sought to terminate the spread of the virus by blocking travel from China in January. Pence also appeared to blanch when Harris invoked Abraham Lincoln’s refusal to push through a Supreme Court Justice twenty-seven days before the 1864 election. At key emotional moments, however, she came across as studied and insincere. There is a packaged quality to her that is at odds with her profession of concern. Her remarks never seemed particularly spontaneous or impassioned, but, rather, rehearsed.

Pence targeted her on issues such as the Breonna Taylor case. He declared, “It really is remarkable that, as a former prosecutor, you would assume that an impaneled grand jury, looking at all the evidence, got it wrong.” He added, “This presumption that you hear consistently from Joe Biden and Kamala Harris that America is systemically racist, that he believes that law enforcement has an implicit bias against minorities, is a great insult to the men and women who serve in law enforcement.”

Ultimately, Pence had his own calculations in mind. For all his professions of faith in Trump, he was notably reticent to issue them tonight. He did not even allude to Trump in his closing remarks. Instead, he was intent on preserving his own political future, which he likely did.