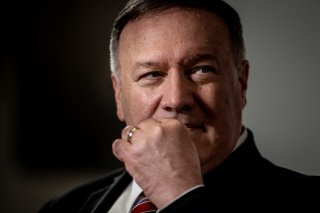 President Donald Trump’s “new China strategy,” according to Zack Cooper of the American Enterprise Institute, is, like Russia, a “riddle,” a “mystery,” and an “enigma.”

Cooper may now want to revise his commentary.

He may still dislike Trump’s China policy, but after Thursday neither he nor anyone else can say they don’t know what it is.

Secretary of State Mike Pompeo, from the podium at the Richard Nixon Presidential Library and Museum in Yorba Linda, California, laid out in no uncertain terms what the administration wanted to do and how it planned to go about accomplishing its ambitious aims.

America, the secretary of state said, has effectively ditched five decades of “engagement” policy and is now embracing a policy now out of favor across the American policy establishment: regime change.

Formally, the State Department still “engages” China, Pompeo said, but “simply to demand fairness and reciprocity.” Gone are the days when American diplomats engaged China to support the Communist Party. Too often in the past, U.S. presidents rescued Chinese communism, three times—Nixon in 1972, Bush in 1989, and Clinton in 1999—in particular.

More importantly, Pompeo said there would be a new form of engagement. “We must also engage and empower the Chinese people—a dynamic, freedom-loving people who are completely distinct from the Chinese Communist Party,” he said. “That begins with in-person diplomacy.”

Analysts say the landmark address is “a cry for war,” as Fred Kaplan, writing on the Slate site told us. Yes, there is nothing that scares China’s insecure leadership as the United States speaking directly to the Chinese people. So to the ears of Xi Jinping, China’s ruler, Pompeo’s words undoubtedly sounded like a war cry.

Many talk about the United States in recent weeks starting a “new Cold War,” but that formulation is Beijing’s narrative and is certainly inapt. There is nothing “new” about the multi-generational, across-continents struggle. China has been waging this contest since the fall of the Soviet Union. It’s just that Americans have been, for reasons that have changed over time, oblivious.

If there is anything new about the struggle with China, it is that Americans have realized the danger of the Communist Party’s challenge to America and started to do something about it.

Nonetheless, the U.S., now aroused, is still not fully aware of the fundamental nature of the challenge. Xi, unfortunately, thinks everyone should acknowledge not only Chinese hegemony but also China’s rule, working relentlessly to resurrect the imperial-era concept that China’s ruler has both the right and responsibility to rule tianxia, or all under Heaven. Xi, therefore, poses an existential threat to both America and the Westphalian international system in place since 1648. China, unfortunately, is again ruled by a revolutionary.

Moreover, Americans have been slow to grasp China’s hostility. Beijing’s disinformation campaigns against the United States, in relation to the coronavirus epidemic and the George Floyd protests, have been stunning in their deceitfulness and maliciousness.

Furthermore, Beijing has apparently gone all out: in mid-March, according to the New York Times, Beijing surreptitiously propagating a story, through text messages and social media feeds, it knew to be false, apparently to cause turmoil in America.

Up to now, the American policy establishment has thought it could handle Beijing with traditional diplomacy. As former State Department official Susan Thornton told PBS NewsHour’s Nick Schifrin the day before Pompeo’s address, “Well, I think from where I sit the real problem is that we need a very nuanced and thoughtful strategy to take on the very complicated challenge that China presents, and right now it seems like we have a tough attitude and a lot of provocative measures that don’t account for a strategy and don’t have any clear accomplishment.”

Thornton’s words sound good to the ear, but the U.S. has in fact employed a “nuanced and thoughtful strategy” for decades, and that strategy has obviously not been able to handle the militant regime that Xi Jinping leads.

China’s militancy is frightening. Its military—and perhaps some of the country’s civilian leaders—are now driven by blood lust. For instance, on the evening of June 15 Chinese troops, in a premeditated action, killed 20 Indian soldiers south of the Line of Actual Control in Indian-controlled territory in eastern Ladakh. With Beijing engaging in its “Wolf Warrior diplomacy” across the world, but especially along its southern and eastern borders, only a robust response has a chance of succeeding, especially if the regime is now, as it appears, incapable of either responsible conduct or even reform.

Taken together, these six pronouncements constitute today’s version of the Long Telegram of 1946 and the “X Article” of 1947, George Kennan’s paradigm-changing thoughts on the Soviet Union.

A paradigm shift on China comes none too soon. “It’s time,” Pompeo said on Thursday,  “It’s time for free nations to act.”

From Pompeo on Thursday we heard an echo of “Tear down this wall.” And we heard that when everything is at stake and there’s not a moment to lose.