Mike Pompeo Needs to Understand: Iraq Is Not Lebanon 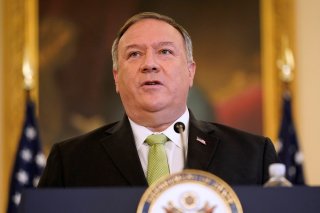 Secretary of State Mike Pompeo reportedly made a series of phone calls to Iraqi officials this past week threatening to close the U.S. Embassy if Prime Minister Mustafa al-Kadhimi did not take more decisive action against Iranian-backed militias like Kataib Hezbollah and Asaib ahl-e al-Haq which in recent months have been launching rocket attacks on the U.S. embassy compound in Baghdad.

Such a threat, if carried out, would be an Iranian dream come true. It would allow Iran to consolidate its influence in Baghdad at a time when a nationalist revival was forcing Tehran into retreat. It would affirm the utility of terrorism rather than defeat it: Iranian terrorism did not decline after Secretary of State Mike Pompeo earlier ordered the closure of the U.S. consulate in Basra for similar reasons.

The Trump or potential Biden administration should also consider the current political leadership in Baghdad to be a dream team. President Barham Salih and Prime Minister Mustafa al-Kadhimi are both capable leaders whose pro-Western orientation is beyond dispute. Both are Iraqi nationalists who seek to reign in those groups which would undermine or act against Iraqi sovereignty. To pull the carpet out from them signals all Iraqis that the United States will not support its friends. In effect, Pompeo now does to those Iraqis who have placed their lives on the line what Trump earlier did to the Syrian Kurds who allied with the United States to defeat the Islamic State.

Should Trump and Pompeo push forward with their threats, the results would be more disastrous than President Barack Obama’s 2011 withdrawal. Obama brought U.S. troops home, but the U.S. Embassy continued its work. If Pompeo also closes the world’s most expensive embassy, the imagery of Iranian-backed militiamen rampaging through the compound when the last helicopter departs and raising their militias’ flags upon the embassy building will be more devastating than the iconic photographs of the U.S. withdrawal from Saigon.

It is certainly ironic that Pompeo—the architect of the ‘maximum pressure’ campaign on Iran—might be responsible for the Islamic Republic’s greatest strategic victory since President Ronald Reagan ordered U.S. Marines to withdraw from Lebanon after Hezbollah attacked the U.S. Embassy and Marine Barracks in 1983. It was that flight under fire that convinced a young scion of a Saudi construction empire that he could defeat the United States with more ambitious terrorism.

To understand how the State Department justifies its actions now, it is necessary to appreciate the impact of the subsequent Lebanon debate on Washington. The 1983 attacks put Hezbollah on the map in Washington, and all subsequent administrations struggled with how to bring peace to Lebanon and allow the Lebanese state to re-assert its authority throughout the entirety of its territory while rolling back the growing influence of Hezbollah. For decades, U.S. diplomats and various friends of Lebanon argued for a nuanced approach: Build and support cross-sectarian nationalist organizations like the Lebanese Armed Forces but do nothing that would upset the delicate balance in Beirut. Such nuance did not work: Hezbollah’s power grew. Anti-Hezbollah forces were never able to sideline their own squabbles in order to marginalize and roll-back the Iranian-backed militia. Rather than defeat Hezbollah, the Lebanese Armed Forces allowed the Iranian-backed group to defeat it. Nor did the European approach of allowing Hezbollah a share in government work. Hezbollah did not moderate, but rather amplified its gains into broader national control. The U.S. taxpayers may contribute more than $700 million to Lebanon but have little to show for their investment beyond a failed state overseen by a pro-Iranian militia whose power is only expanding.

Given Lebanon, Pompeo—and the president for whom he works—is right to ask whether nuance works or whether he should accept the word of any Iraqi politician who begs for more time before taking on the militias. But he is wrong to assume Iraq is Lebanon. Iranian-backed leaders in groups like Kataib Hezbollah or Asaib Ahl-e al-Haq may have aspirations to become the new Hezbollah, but their assent is far from assured. They may cloak themselves in the mantle of the Shi’ite militias who responded to Grand Ayatollah Sistani’s calls to defeat the Islamic State, but Iraqis differentiate between those groups which arose to answer Sistani’s call versus those which the Islamic Revolutionary Guard Corps formed a decade earlier to fight Americans working to rebuild Iraq.

Pompeo also now falls victims to the dysfunction of the U.S. Embassy in Baghdad. The embassy compound is more a prison than an embassy. Those serving within its fortified walls seldom if ever leave its grounds. They constantly read reports about militias, but never get to experience the real Baghdad which has seen a revival in recent years. As they eat in the embassy cafeteria, they have little sense of the Iraqi men, women, and children who are trying the newest coffee shop or restaurant just across the river or shopping in the newest stores. Diplomats amplify the worst in their reports which are increasingly disconnected from the reality which Iraqis experience. These Iraqis increasingly consider the militias firing weaponry at the American compound to be just as anti-Iraqi as anti-American. After all, the rockets often miss the U.S. compound and instead strike Iraqi houses and apartment buildings. Likewise, it was militia attacks on Iraqis which transformed the protests Iraqis launched just a year ago into a movement which ousted a prime minister and brought Kadhimi to power.

Earlier this summer, Kadhimi showed himself willing to act: He had security forces raid a Kataib Hezbollah facility and arrested 14 (most of whom were subsequently released). The militia then marched on Kadhimi’s residence, getting to within 150 yards of it. Kadhimi’s life was very much in danger, but not only was no U.S. support forthcoming, but in his hour of need, Kadhimi received little meaningful communication from the embassy or Washington. Perhaps if the Trump administration was serious about its desire to have Kadhimi take on the militias, it might consider how it could better convince those putting their lives on the line that U.S. support is not ephemeral or fleeting.

Rather than unilaterally withdrawing from Iraq, Trump and Pompeo might consider other strategies to hold to account those most responsible for betraying Iraq and threatening American lives. They might push forward on ensuring new elections take place in the coming year under a reformed election law. They might help Kadhimi make good on some of his promises in order to convince Iraq’s younger generation that changes are afoot which will promise them a better future.

Alas, the reality is the opposite. In Syria, Afghanistan, and now Iraq, Trump and Pompeo are showing that terror works and that no one should trust the United States. Already, Russia is taking that lesson to Saudi Arabia and Egypt as it tries to peel away allies and end decades-long alliances. Trump may rail against “endless wars” but he should consider what the world would look like if the United States has neither alliances nor the trust necessary to build them.