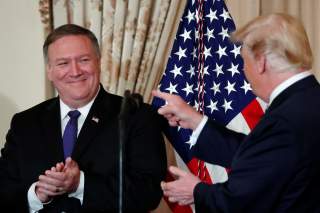 When Secretary of State Mike Pompeo opened the U.S. Chamber of Commerce’s Indo-Pacific Business Forum Monday morning, he stressed the strategic importance of maintaining a “free and open” Indo-Pacific region. And he made it clear that when the United States says “free and open,” it means it.

And he might have added: the internet. Of course, there’s one country in the Indo-Pacific that has a notoriously closed internet. China’s great firewall is a black hole at the heart of the Indo-Pacific internet. Chinese internet companies like Alibaba and Tencent are eager to expand throughout the region, but the Chinese government keeps its home market firmly closed.

Pompeo announced a $25 million initial investment for a digital connectivity and cyber-security partnership to help develop internet infrastructure in the region.

Financially, that’s small potatoes compared to China’s massive Belt and Road Initiative. But China’s program focuses on linking Indo-Pacific countries to China. The U.S. program is about opening the Indo-Pacific to the world.

But perhaps the most important thing about Pompeo’s regional diplomatic offensive is its focus on promoting private-sector investment. China’s investments in the region are state-led and state-run. That means there are lots of diplomatic strings attached, as everyone in the region understands.

As Pompeo pointed out, with U.S. private-sector investment, “what you see is what you get.” When you let China build a road, it’s a road to China. When you let private industry build an internet connection, it’s a road to anywhere you want to go. Even China benefits when regional infrastructure is free and open. In fact, China may benefit most—if it allows its people and companies to participate.

There’s only one country that wants to close the Indo-Pacific, and that’s China. It won’t succeed anytime soon, but China’s closure strategy has been successful in at least important patch at the heart of the region, the South China Sea. By militarizing the waters at the very center of the Indo-Pacific, China has thrown down a gauntlet in front of all of its maritime neighbors. China knows that its neighbors are too weak to actively resist, even if they have no interest in joining China.

Enter the United States. The U.S. Navy regularly runs freedom of navigation operations (FonOps) in the South China Sea to remind the world that China does not own the global commons. Other countries’ navies also annoy China by transiting the sea, but only the U.S. Navy (and Air Force) navigates within twelve miles of China’s illegal artificial island bases.

Those U.S. ships and planes need a stable base from which to operate and—in an emergency—at which to find refuge. Singapore is close by, but Singapore is a small country without a formal U.S. alliance that is highly vulnerable to Chinese pressure. The Navy and Air Force both need a safe harbor in the backyard of the Indo-Pacific, and they seem to have found it in Australia’s northern outpost of Darwin.

Though USINDOPACOM is headquartered in Hawaii and is responsible for major U.S. deployments in Japan and South Korea, the two maritime cornerstones of American power in the Indo-Pacific are Guam on the right and Diego Garcia on the left. Now Darwin, the capital of Australia’s Northern Territory, is falling into place as the keystone at the center of the arch.

If Australia as a whole is sometimes ambivalent about the presence of U.S. forces, Darwin is unabashedly enthusiastic. U.S. Navy ships, Marines, F-22s, and B-52s have all been rotating through Darwin, a city of a little over one hundred thousand where the U.S. and Australia are jointly pouring more than $1 billion into defense infrastructure.

China says that this defense infrastructure buildup targets China and “jeopardize[s] regional peace and stability.” A quick look at the map shows the opposite. The American arch around the South China Sea is a defensive posture. China’s military buildup, like its Belt and Road Initiative, is fundamentally about offense.

A Pacific Partnership for Peace

As Pompeo stressed in Washington, “where America goes, we seek partnership, not domination.” In eastern Europe, NATO has a program it calls the Partnership for Peace. With patient gardening (and a bit of good luck) Pompeo’s Indo-Pacific initiative could become a civilian equivalent in Asia.

America’s military might will always be there as a backstop, but it’s unrealistic for China to consider a base 2,500 miles away in Australia any kind of offensive gesture to threaten its security. Even American FonOps don’t threaten China. They simply serve to keep the region open.

The United States has had an open-door policy in Asia for more than one hundred years. It has always been based on business first, and force only as a last resort. Pompeo’s Indo-Pacific initiative fits squarely in that time-honored tradition. The architecture of a free and open Indo-Pacific may be supported by the military arch, but its upper stories will be built by private enterprise, and its doors will be open to everyone—including China.