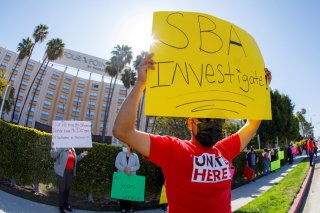 Gregory León, the owner of Amilinda restaurant in Milwaukee, was planning to upgrade his restaurant’s space, expand staff and boost worker pay after the Small Business Administration (SBA) notified him that the restaurant would be receiving all of the money it lost during the coronavirus pandemic.

León had applied for a grant from the SBA after closing in-person operations for almost a full year—federal funds that would come from the agency’s $29 billion grant program reserved for enhancing the restaurant industry after it was brutally hit by the economic impacts of the pandemic.

But León’s approved stimulus money for his restaurant is “floating in limbo,” he explained to me, following a series of lawsuits filed against the SBA that argue that the Restaurant Revitalization Fund, a program established under President Joe Biden’s $1.9 trillion rescue package, was discriminatory.

Several white business owners filed a lawsuit challenging the SBA, as Biden’s relief bill ordered the SBA to only approve applications from women, military veterans, and “socially and economically disadvantaged” individuals from certain racial and cultural groups with financial barriers. Other business owners who don’t meet these qualifications can still apply for the fund, but the application must undergo further review.

The judge ruled in favor of the entrepreneurs, prompting the agency to stop processing grants for the fund, saying that it would “only resume processing these applications once it completes processing for all previously filed non-priority applications, and only then if the RRF is not first exhausted.” But that halted processing puts nearly 3,000 applicants at a roadblock—including León—forcing them to wait weeks, or perhaps months, to receive their approved funding.

So the $285,000 that the restaurant was approved to receive from the SBA—or the amount that he says the small restaurant lost during the pandemic—won’t be processed by the agency until it has processed applications and “replenished” its money supply for the fund.

“We wanted to do some improvements to the restaurant, like fix the air system,” León notes. “We can’t do that. We had a plan on bringing more staff on, so we could open up more tables because right now all of the restrictions are gone in Milwaukee, so I could operate at 100 percent. What’s keeping me from operating at 100 percent capacity is staff,” León said. “I’m just being cautious of bringing more people on and increase payroll when I’m not sure if the revenue that’s going to come in is going to cover that.”

He added, “There’s a lot of things that we had planned on doing that we just can’t. For us, at least for me, on a daily basis, it’s more like, well, how much longer am I going to be this dog chasing its tail?”

León noted that he had “no idea” that the lawsuits were going on and that the results “caught us off guard.”

“What’s going to happen now, as far as that money, we really don’t know,” León said.

The halted payments come as other small businesses across the U.S. are still scuffling to receive financial assistance from the federal government, even more than a year after the economy took a tailspin. And the fate of their additional monetary assistance is at the discretion of the SBA—one of the smallest cabinet-level agencies—that’s been long referred to as the government’s “sleepy backwater.” Despite the Biden administration’s claims to stand for the little guy, the SBA appears to be pursuing a course in which it elevates the pursuit of social justice over actually assisting small businesses. When the Biden administration requested the funding, however, Congress never authorized this quixotic approach. The result is that the SBA is stuck in a legal morass, both endangering jobs and failing to help create new ones.

When the $2.2 trillion Cares Act passed last year, Congress and the Trump administration tasked an agency “with an annual operating budget that is typically less than half of what the Defense Department spends in a day,” according to the New York Times, to manage a nearly $1 trillion portfolio that would help struggling small businesses. Nearly seventy-five percent of the country’s small businesses pivoted to the SBA amid the abrupt lockdowns last year, prompting the agency to close new business applications for its pandemic relief effort, the Paycheck Protection Program (PPP), earlier than expected after issuing or guaranteeing loans worth roughly $900 billion. Business owners were outraged by the SBA’s decision, flooding agency administrators with complaints and backlash.

At first, however, the agency swiftly sent small businesses federal aid, taking nearly 12,000 phone calls a day when the SBA would usually respond to a few hundred inquiries before the pandemic struck. Since March 2020, the agency’s PPP rescued more than eight million companies, worth roughly $788 billion, and has also issued almost $211 billion in Economic Injury Disaster Loans, a program that offers funds to organizations during federally claimed disasters.

But these pandemic responsibilities resurfaced historic operation shortfalls at the SBA, as millions of small businesses have reported issues with receiving the federal funds and connecting with agency representatives over details regarding their application status.

There was a remarkable demand for federal relief that swamped the SBA, and many business owners were left with no response or long waits. Some business owners’ applications were never processed, while others waited hours on the phone to get in touch with an agency employee or experienced technological glitches. The SBA even warned that there were massive instances of fraud.

The Wall Street Journal noted that “at the heart of many of the problems” is the Office of Disaster Assistance, a sector within the SBA that handles nearly twenty-five percent of the agency’s pandemic loans. It managed applications for Economic Injury Disaster Loans (EIDL), but the office faced uphill battles when their management and technology were tested with the influx of business owners requesting aid.

“SBA disaster loans have always been a disaster,” Veronique De Rugy, a Senior Research Fellow at the Mercatus Center at George Mason University and an expert on the SBA, told me. “I mean, it is just really, actually, quite astonishing.”

The Center for the National Interest is one of the millions of companies that experienced the inefficiency at the SBA. Nearly two months after Biden took office, Congress and the administration signed off on a measure that expanded disaster and pandemic-related relief programs for small businesses and non-profits. Months later trying to communicate with the SBA is like talking into a void. Here is the anodyne statement sent to me by the SBA about its tardiness in processing applications and distributing funds: “The SBA is deeply committed to getting funds into the hands of struggling small business owners as quickly as possible. We are moving to address this challenge—we have already begun working on changes to improve the process, including coordinating closely with IRS to accelerate access to tax data; looking at staffing plans to meet the increased demand; and revisiting our processes to ensure we are processing applications efficiently. The current pace is not reflective of the high standards that we strive to meet but we are optimistic that our dedicated team at the SBA will be able to meet this expectation.”

This behavior isn’t “unique” for the SBA’s disaster office, as there have been several calamitous previous agency disaster responses. One example was when Congress tried to implement a program at the SBA that would help small businesses recover after Hurricane Katrina’s devastating effects that wiped out entire neighborhoods and towns. Even with the small business reforms, zero loans were secured for small businesses in the seven years following Katrina’s crash.

“What the real reason behind this is, there’s a lot of path dependency and lack of original thinking that goes on in government, especially when you’re in a time of crisis, and there’s just very little time,” De Rugy notes. “They try to use the channels that we already have, and unfortunately, they tend to ignore the lessons from the past.” “There’s not a lot of accountability in government. There’s a lot of terrible incentives. There’s a great amount of path dependency, where the government tends to do the same thing over and over again, and in time of emergency, to fall back on the things that they know,” De Rugy added.

Then there is Isabella Guzman, the head of the SBA who declined to be interviewed by the National Interest. She inherited an agency with a backlog of inefficient operations and faces the challenge of leading the nation’s rollout in sending federal relief to small business owners. So far, she appears to have done nothing to improve its performance. Instead, as her Twitter account reveals, her principal focus appears to be something other than helping a broad range of small businesses as quickly as possible. On June 22, for example, she tweeted: “Proud to help kick-off the 2nd cohort of the Small Business Investing Scholars Program – an internship program that builds gender, racial, and ethnic diversity across our Small Business Investing Companies.”