Mini-Battlegroups: How NATO Can Take On the Threats of the Future 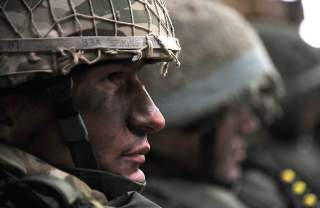 Last month Sweden and Finland—the two neighbors and long-time proponents of neutrality—joined a military formation. On June 30, their defense ministers and UK defense secretary Michael Fallon signed the accession of Sweden and Finland to the Joint Expeditionary Force, a British-led outfit that also includes Denmark, Estonia, Latvia, Lithuania, the Netherlands and Norway. The JEF, as it’s known, is one of several military mini-alliances now operating in Europe. And that’s good news for NATO.

The JEF is a high-readiness force tasked with quickly responding to emergencies around the world. It’s also a very recent multinational formation. It was launched only two years ago and JEF’s members are still adding to its capabilities. Also, it is scheduled to become fully operational next year, which means that it could deploy ten thousand troops to military or humanitarian crises.

Britain uses its expeditionary troops for another joint force, the Combined Joint Expeditionary Force, which it operates with France. The CJEF, part of the so-called Lancaster House military cooperation treaty signed by the two countries seven years ago, likewise deploys troops to crises; a recent exercise involved more than five thousand troops.

In fact, these days Europe has a host of military mini-formations. The EU operates battle groups with the same task as the JEF and CJEF forces, though those EU forces are smaller. On the day before they signed the JEF agreement, Sweden and Finland’s defense ministers signed a military cooperation treaty with Germany. Germany and France, in turn, operate a joint brigade, while EU member states operate the twenty-five-year-old Eurocorps. Poland, Ukraine and Lithuania, in turn, have a joint brigade with the somewhat clunky name LITPOLUKRBRIG. Taking armed forces cooperation to a new level, Germany is integrating units from three other countries—Netherlands, Romania and the Czech Republic—into the Bundeswehr. According to Dick Zandee, a senior research fellow at Clingendael (the Netherlands Institute of International Relations) and a former head of the Planning and Policy Unit at the European Defence Agency, such smaller military groupings makes perfect sense. “Clusters optimize the military cooperation between countries’ armed forces,” he said. “In terms of optimization, clusters are the only thing that works. The more member states you have, the more complicated it becomes.”

But most of the countries involved in these European mini-formations are also members of NATO. That raises the question: with NATO available to defend Europe, why does the continent need more military formations? Specifically, does Europe need military formations whose capabilities are dwarfed by those of NATO? The United States armed forces alone feature some 1.3 million men and women; at the recent Saber Strike Seventeen exercise some eleven thousand troops trained in the Baltic states and Poland.

Indeed, in case of a real emergency NATO members would rely on that alliance, not on the JEF or another mini-formation. And while the JEF has supported Ebola efforts, the EU’s battle groups have never been deployed despite having been fully operational for ten years. Indeed, chances are they will never be deployed because the EU’s members would have to agree to deploy them—and most crises are either too small or too large to be effectively addressed by 1,500–2,500 soldiers. And nobody would expect the JEF or the EU battle groups to perform the same massive effort as NATO—that’s not their mission.

Even so, the mini-formations are extremely useful. That’s because they have two things that NATO lacks: permanent forces and a small number of members, whose armed forces are very similar in training and equipment. Additionally, the regular exercises conducted by mini-formations have a benefit in themselves: they help European armed forces integrate. The EU’s battle groups may only consist of some two thousand soldiers, but constant exercises with troops from other countries they learn to operate effectively together.

What’s more, by joining forces in smaller settings than NATO countries speed up interoperability. Interoperability is defined by Merriam-Webster as the “ability of a system (such as a weapons system) to work with or use the parts or equipment of another system”. While interoperability has long been a NATO objective, it’s easier said than achieved: each country buys its own equipment, and unlike mobile phones most weapons are not designed to work seamlessly with weapons made by another manufacturer. And because most large countries have large domestic defense industries, unlike mobile phone customers they don’t congregate towards just one or two global manufacturers. The same goes for military culture: as in most areas, countries like to do things their own way. But twenty-eight countries doing European military operations their own way won’t enhance security. Smaller alliances between similar countries can accelerate interoperability, too, as they’re more likely to agree on the acquisition of similar or identical equipment, and are more likely to share it with their allies. “The second agenda for the battle groups, in addition to deploying them to crises, has always been to use them as interoperability accelerators,” Zandee pointed out.

Added Justyna Gotkowska, a Northern Europe defense specialist at the Center for Eastern Studies in Warsaw: “For many countries in Europe, military cooperation in mini-formats in Europe is a way to increase interoperability with important regional allies. In the case of the V4 EU battle group, between Poland, Czech Republic, Slovakia and Hungary; in the case of the JEF between UK and the Baltic and Nordic countries. Should a deployment materialize, the troops will function as well with troops with another country as with their compatriots.” The mini-formations have already yielded results. The V4 EU battle group members will join NATO’s VJTF spearhead force in 2020, led by Poland—a step aided by their joint experience in the battle group.

With interoperability one of NATO’s main challenges, the mini-formations are poised to provide a service to European security beyond any deployments. Through their constant exercises, they’re already teaching European armed forces to act as one, albeit in small settings. The much-derided EU battle groups may not be so pointless after all.

Elisabeth Braw is a nonresident senior fellow at the Atlantic Council.

Image: A paratrooper waits for the signal to jump from a Hercules aircraft. Flickr / Defence Images