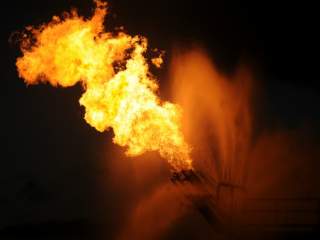 Ever since Stuart Bowen led the first attempt to account for Iraqi reconstruction funds in mid-2004, it has been clear that Iraq hemorrhages money through corruption.

Since then, things have got worse as last year the late Ahmed Chalabi found twenty-nine companies who were stealing over $4 billion with fake contracts. Stories of phantom projects and ghost employees abound, even after the last scandal in 2014 where fifty thousand names were found on the Ministry of Defense payroll, men no longer turning up to work. Commanders pocketed their salaries.

But Iraq has another silent economic killer: years of mismanagement, which have seen around $700 billion in mostly oil revenues produce little beyond a staggering seven million government employees, but not enough schools and infrastructure.

And while every administration promises to end corruption, many politicians in Iraq are oblivious to the financial black hole of mismanagement. This includes generous subsidies for anything that moves and the propping up of a host of failed state-owned companies, as well as absurdly bloated ministry payrolls and high politicians’ salaries. In fact, ministry payrolls have become a kind of jobs-for-votes scheme.

Therefore, $60 billion of Iraq’s $99 billion budget goes to state wages, blank checks for political hiring schemes. The Kurdish region has been no different, with over 70 percent of its budget going on government jobs.

In Iraq, mismanagement is driving the country off a cliff edge because of the oil price collapse. This phenomenal waste could give ISIS (who are rapidly falling back) one last chance. That chance may come some time towards the end of this year, when Iraq faces possible bankruptcy.

Meanwhile overspending endures, tied to a legacy of petrodollar-fueled socialism that would make Maduro blush. Even in the last oil price crunch in 2008, the state still expanded 30 percent.

Lamentably, a member of the parliamentary finance committee recently said that the obvious course of action (cutting state salaries) was a red line. Prime Minister Haidar al-Abadi is now seeing his call for reforms shot down, because few have the will to admit what needs to be done. As such, Abadi has managed to cut civil-servant salaries by a pathetic 3 percent. Iraq’s government revenues fell 60 percent, so salary reform should reflect that.

Ironically, this lack of strategy fosters corruption. It hinders the aim of successive Iraqi governments to attract private enterprise. Housing developments are often reserved for government employees, while other land is held back for state-owned enterprises.

Private investors that Iraq desperately needs find themselves walking into a minefield of political interests. Iraq is now ranked 161 out of 189 countries in the World Bank’s ease-of-doing-business ratings.

So for a long time, foreign companies have said the confusing business environment is actually worse than security concerns. Meanwhile, Iraqi officials have become masters of self-inflicted economic injury.

Take natural gas. Iraq’s oil and gas fields already produce enough to keep power stations running and electric lights on every summer, when demand peaks at 21,000 MW, 8,000 MW higher than what is generated. This gas could keep factories humming with plenty left over for export. There is one problem: most of this gas is burned or “flared.” Iraqi National and International Oil Companies have failed to invest in the right technology to capture it, costing Iraq billions.

Therefore, the plan to eliminate flaring is now years behind schedule. Iraq burns away 1.9 billion cubic feet of gas, enough to keep power stations running and electric lights on in four million homes. However, gas flaring will triple at the current rate if the oil production goal of seven million barrels per day is reached.

To make up for the shortage in gas, Iraq now imports up to $4 billion a year of it from Iran, while burning millions of dollars of it each day.

Gas isn’t the only thing Iraq has been short of. Refined fuel has run out in the past too. Iraq doesn’t have enough refineries, despite saying for years that enough will be built. Worse, the massive Baiji refinery has been destroyed in the anti-ISIS campaign, knocking out over a third of Iraq’s refining capacity. To make up the shortfall, Iraq spends up to $5 billion a year importing fuel, but this has caused absurd shortages due to subsidies at below-market prices. In 2011, these subsidies took up 14 percent of GDP, close to $10 billion now.

Prices then spike as the black market causes shortages, cancelling out the intended effect of helping the poor. Most of Iraq’s subsidies therefore legitimize corruption, allowing government officials dangerous oversight over a poorly accounted distribution system. Many of these subsidies help middle-income government employees, not the most vulnerable people.

For example, last year the IMF noted how Iraq’s Public Distribution System sent out more flour than most families use, and the rest was often sold on the black market. Poor people can therefore end up paying more for basic goods. Likewise with electricity, where the current tariff system allows free electricity for most households, but the free limit is more than what many U.S. homes use. Strain on the grid increases, and the poorest neighborhoods suffer.

Together, wastefully designed food and electricity subsidies match fuel-sector waste, costing well over $10 billion. In total, this costs more than three times the cost of America’s $7 billion war on ISIS. And that’s just the waste we know about. According to the IEA, the “opportunity cost” of energy-mismanagement could be as high as $40 billion annually.

For perspective, Iraq is seeking to borrow about $15 billion this year, mostly from the World Bank and IMF, so most of this borrowing would not even be necessary if the bulk of subsidies were removed.

Ending this waste will involve overhauling the political quota system that has turned Iraqi politics into a mad scramble for ministries.

Ministries have hiring power in a land of high unemployment, so they seek to dominate recruiting power, crowding out investment. A couple of years ago the Ministry of Transport monopolized the trucking business, but it didn’t have enough trucks to serve the country. It was found that only nine hundred of their four thousand employees actually worked.

Unless the government can stop this, there will be a political trainwreck. The next crisis in the world’s fastest-growing energy provider can be avoided if we take action now. The international community must rally together to put funds where they will count the most, and this is in building capacity in ministries.

For example, the Higher Committee for Education Development last year had a budget of just $125 million, but has sent four thousand Iraqis abroad to gain masters qualifications (including to the United States) and rates of return to Iraq have been over 90 percent, with many helping in ministries.

This is a drop in the ocean and would be an obvious target for more foreign assistance, which is dominated by military funding. Ongoing aid for Iraq’s millions of displaced people is of course vital, but without ministerial capacity, the next administration will flounder, no matter who is in charge.

One interesting reaction has been from the Kurdistan Regional Government. The Kurds have suffered many of the bloated state ailments of Baghdad, but the government has front-loaded economic pain, preparing their people for more shocks by taking a massive salary cut that includes the top tier of the civil service. But ominously, mass demonstrations have continued against Massoud Barzani’s government.

For Baghdad, international donors could help Iraq swallow this bitter medicine, which would help cool anger on the Iraqi street, by toughening up the IMF and World Bank demands attached to loans. If not, there is a real danger the loans will simply add to the factional money scramble, kicking a debt problem to the next administration.

Of course, regardless of lending conditions, only Iraqis can take the radical steps needed to overhaul their political system. If Iraq does indeed get $15 billion in loans, there is a chance politicians will simply play along until oil prices “rise”. This is a mistake Iraq cannot make again. When reforms come, they will already be years too late.