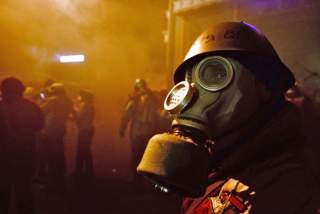 The catastrophe engulfing eastern Ukraine and the immense scale of collateral damage to the Russian economy, as well as the lesser but still significant impact on Europe, has produced some of 2014’s most tendentious news coverage. If two reports in the New York Times over the past week are anything to go by, we can expect more of the same in 2015.

First up is the December 30th Times report “How Putin Forged a Pipeline Deal That Derailed.” Its message is simple: The cancellation of the South Stream pipeline project is a strategic defeat for the Russian president, brought on by his revanchist designs on Ukraine. Reading more like a sinister conspiracy theory than a piece of news analysis, the report asserts that the pipeline project was the key to one of Putin’s goals—that of “further entrenching Russian influence in fragile former Soviet satellite states as part of a broader effort to undermine European unity.” The report purports to show the “hidden hand” of the Kremlin in Bulgarian politics. But for his “fundamental miscalculation” in Crimea, South Stream would have become a reality, thereby prolonging Europe’s dependence on Russian energy.

It’s not a particularly novel thesis. But what makes the report notable is that it is at odds with reality; readers are treated to an in-depth survey of Mr. Putin’s machinations on the continent, his Kremlin’s funding of far-right political parties and anti-fracking campaigns, all with an eye towards expanding and securing Russia’s ostensible energy monopoly in Europe. Towards the end of the piece, almost as an aside, readers are informed that a delegation led by John McCain traveled to Sofia in June. Days later, Bulgaria pulled the plug on South Stream. Yet, rather than focus on, say, that fact that we are witnessing the 21st century’s iteration of the Great Game between the United States and Russia in Eastern Europe, the Times weaves a dark tale of Russia in Bulgaria and beyond.

The article does its best to minimize the very legitimate reason other European countries besides Bulgaria were in favor of South Stream. Readers are told that “In the winter of 2009, Bulgarians were left shivering for two weeks when Russia shut off the gas to teach Ukraine a lesson.” Not a word of historical context; no mention of the fact that, as the International Institute for Strategic Studies’ Pierre Noel has written, “The European gas-supply crises of 2006 and 2009 were triggered by Ukraine making good on its implicit threat to steal Europe-bound gas from transit pipelines if Russia demanded that Kiev pay the market price in the long term.”

This piece of reportage was followed a week later by a page-one, above the fold story—headlined, “Ukraine Leader Was Defeated Even Before He was Ousted”—that attempted to minimize the West’s role in the overthrow of Viktor Yanukovych, the democratically elected president of Ukraine in February, who, yes, like his predecessors proved to be incompetent and corrupt. We are informed that while “Russia has attributed Mr. Yanukovych’s ouster to what it portrays as a violent, ‘neo-fascist’ coup supported and even choreographed by the West and dressed up as a popular uprising…. Few outside the Russian propaganda bubble ever seriously entertained the Kremlin’s line.” Then the report goes on to, among other things, highlight the fantastically violent nature of the February uprising, noting that “1,200 weapons, mostly pistols and Kalashnikov rifles, were seized in raids on five district police stations and the headquarters of the Interior Ministry’s western command.” Readers are subsequently informed that hundreds of these weapons made their way to Kiev.

The main point of the article is this: the democratically elected president of Ukraine “was not so much overthrown as cast adrift by his own allies,” thereby absolving Western governments of any role or responsibility they have (as they surely do) in the unfolding crisis, which—at the time of this writing—has claimed the lives of nearly 5,000 people.

Readers will have to go elsewhere if they are looking for an account that includes German chancellor Angela Merkel’s summary rejection of Mr. Putin’s proposed tripartite deal to head off the crisis in November 2013. They will search in vain for any mention of the behind-the-scenes maneuvering of American diplomats like Assistant Secretary of State Victoria Nuland and U.S. Ambassador to Ukraine Geoffrey Pyatt to gain the Ukrainian government as their ally, the increasingly sanguinary war leader Arseniy Yatsenyuk. Maneuvering may be actually too mild a word. What Europe and Washington resorted to was outright intimidation in the form of financial threats.

Can anyone imagine, for an instant, that the Times would publish a purported piece of news analysis of, say, the last hours of the Allende and Mossadegh regimes, without so much as a mention of possible CIA involvement? Of course not.

All in all, this account of the events leading up to the coup of February 21-22 leaves the reader with the overwhelming impression that for the Times, the violent overthrow of democratically elected governments is fine—as long as they are against regimes that it doesn’t particularly like.