Missile Defense Is Back: Keeping up with Russia, China and Other Threats 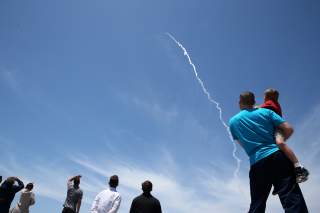 On March 23, 1983, Ronald Reagan addressed the nation and called for a Strategic Defense Initiative that would allow the American military to render the nuclear threat “impotent and obsolete.” Reagan, who had campaigned against atomic weapons in the late 1940s, never really lost his abhorrence of the idea of nuclear war. In his book Ronald Reagan and His Quest to Abolish Nuclear Weapons, Paul Lettow closely examined Reagan’s efforts to end the nuclear scourge, showing that Reagan adhered to the spirit of the Baruch Plan, which the Truman had administration had forwarded in an attempt to cooperate with the Soviet Union to harness nuclear power for peaceful purposes.

Today, missile defense is once again a hot topic in Washington, DC. To discuss the issue, TNI editor Jacob Heilbrunn spoke with Hudson Institute national security fellow Rebeccah L. Heinrichs. Heinrichs, it seems safe to say, is a defense hawk. A proponent of missile defense, she has worked for many years on the issue. According to her Hudson Institute biography, “Rebeccah served as an adviser on military matters and foreign policy to Rep. Trent Franks (R-AZ), a member of the House Armed Services Committee, and helped launch the bi-partisan Missile Defense Caucus.

She holds a Master of Arts degree in national security and strategic policy from the U.S. Naval War College. She also graduated with highest distinction from its College of Naval Command and Staff, receiving the Director’s Award for academic excellence. She received a Bachelor of Arts degree from Ashland University in Ohio, and graduated from the Ashbrook Scholar Program.”