Missing in Action: Where Are the Arabs in the Fight against ISIS? 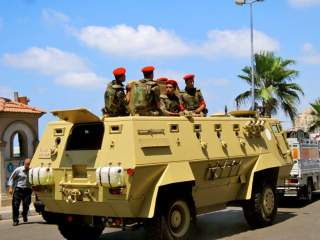 Some argue that ISIS in Iraq is an Arab problem. Ergo, it should be Arab boots on the ground that kick the land-grabbing insurgency from the field.

That argument has an undeniable appeal here in the United States. America is exhausted with wars. Leading from behind seems an attractive option. There is also the matter of the end game. A security framework requiring endless U.S. intervention in the Middle East doesn’t seem like a very sound strategy. A near constant drain on resources and attention might exacerbate America’s overstretch. Moreover, an overly intrusive U.S. presence might start as many fires as it puts out.

And then there are the cautions of history. “Do not try to do too much with your own hands. Better the Arabs do it tolerably than that you do it perfectly,” wrote T.E. Lawrence “of Arabia” nearly 100 years ago in his famous “Twenty Seven Articles.” “It is their war, and you are to help them, not to win it for them. Actually, also, under the very odd conditions of Arabia, your practical work will not be as good as, perhaps, you think it is.”

Lawrence knew a thing or two about fighting in the Middle East. “Lawrence in Arabia,” a recent history of him and his times by Scott Anderson, offers a sober and demythologized version of Lawrence’s effort to galvanize Arab resistance against the Ottomans. The British effort to fuel the Arab insurgency worked in large part because Lawrence took the time to understand the people he was fighting with and shrewdly assessed what they could and would do.

In large part, however, the Arab rebellion would have been stillborn had there been no British Imperial Army to press the Ottoman forces to the wall. The Arabs didn’t get what they most desired—a homeland in Syria. But with the aid of British conventional forces, they did win a measure of independence.

But history also teaches us that there are limits to outsourcing military operations. When Dwight Eisenhower served as president during some the hottest days of the Cold War, he hit on a novel idea for having the Europeans defend themselves. He called it the Volunteer Freedom Corps.  The idea was to round-up all the male military-age expatriates who had fled Eastern Europe and form them into units to defend Western Europe. Eventually, he mused, they might serve as the core of a force to liberate their own countries. Needless to say, the West Europeans thought it was a dreadful idea. The notion of rootless, foreign, armed forces garrisoned in their shaky post-war states failed to appeal. Ike quietly dropped the idea.

There is nothing wrong with insisting friends and allies help themselves as long as there is a suitable, feasible, acceptable solution. The historical record is pretty consistent in this regard. In the case of asking “the Arabs” to drive ISIS into the sea, one question must first be answered: who are you talking about?  Who has the capacity and forces to rout ISIS? Certainly, Saudi Arabia and Egypt have substantial armed forces. Neither has an interest in having ISIS as a neighbor. But, both have issues of their own at present.

Egypt is dealing with a non-trivial transnational terrorist threat in the Sinai and a deteriorating relationship with Hamas. In early July, the government acknowledged Islamist militants had killed at least 50 soldiers in attacks on military outposts.

Further, Egypt is still muddling its way through the aftermath of the Arab Spring. Only a few weeks ago, the regime arrested over a dozen members of the Muslim Brotherhood for plotting an attack on the Suez Canal. To make matters worse, the Egyptians are very worried about what is happening in Libya and Tunisia.

Likewise, Saudi Arabia is anxious over the spiraling violence in Yemen—a witch’s brew of Iranian backed militias, Al Qaeda, ISIS, and an undependable regime driven from the capital. At home, the Saudis face an active terrorist network operating inside the country and the uncertainty of a national leadership transition.

The frontline Gulf states have issues of their own, from political turmoil in Bahrain to terrorism in Kuwait. As for the Qataris—well, no one is really sure what they are up to.

Then, of course, there is Jordan. The kingdom has witnessed the horrific killing of a captured Jordanian pilot by ISIS. It has been flooded with refugees fleeing ISIS. Meanwhile, the terrorist group is actively recruiting Jordanian youth. Certainly the kingdom would like to see the “caliphate” end sooner rather than later. But just keeping Jordan secure is a big enough challenge for the Jordanian armed forces.

Groups inside Iraq have shown willingness to fight back. But there are limits to what they can do. The Kurds are a case in point. Most of the military successes against ISIS in the field have been accomplished by the Kurds—with scant U.S. support. The Kurds are unquestionably willing to fight and die for Kurds. But even with the additional military assistance and support they deserve, there is little expectation they can thrash ISIS decisively. They have already taken losses that are proportionally higher than all the American combat deaths during the Vietnam War. Meanwhile, refugees have swelled their population by a third, and they must now be protected from ISIS.

Even if the Kurds could go into other parts of Iraq and fight ISIS, it is far from clear that they would be welcome. The reality is that Kurds will defend Kurds. The Sunni tribes will fight for their tribes. Shia militias will fight for the Shia. That’s about all that can be expected. Meanwhile, the Iraqi military is a mess. As soon as President Obama pulled out U.S. troops, Iraqi Prime Minister Nouri al-Maliki began deconstructing the armed forces and turning them into his own political-military arm—loyal, but predictably useless as an instrument to defend the country.

The only folks who want to dig deeper into the fight are the Iranians—and that’s no help at all. It’s unlikely that they can defeat ISIS. But their intervention can definitely irrevocably fracture Iraq. It also risks widening and complicating the conflict. Shia militia atrocities may simply substitute for ISIS atrocities.

Even if the Arabs wanted to take the fight to ISIS, they lack the capacity for logistics, campaign planning, and all the supporting arms and assets needed to undertake an offensive campaign. European military forces couldn’t have undertaken military operations in Libya or Mali without heavy lifting from the U.S.—and the Arabs have nowhere near the “out of area” wherewithal of NATO militaries.

So there have to be boots. Some of them could and should be Arab, but there has to be a competent conventional force of appropriate size and capability to lead the way.

ISIS is not 10-feet tall. Breaking their territorial control is doable. But then comes the question of what to do after. And, there has to be an “after.” Iraq can’t heal itself in a neighborhood where troublemakers want to flood in—just as they did after Gulf War II and, later, when President Obama yanked the troops.

There has to be a serious conversation about Iraq after ISIS. After being-turned upside, Iraq will need dependable strategic partners to right itself. If there are none, then we can expect recent sorry history to repeat itself. It is past time to get serious about ISIS. The tragedy is that President Obama has yet to put on the table a serious plan to keep the terrorist group from becoming a bigger problem—and a bigger threat to Americans and our vital interests. Absent such a plan, ISIS could well become the center of a serious global Islamist insurgency.

We need a different strategy than what the president is delivering—but different has to mean better—not a plan that leaves the region in turmoil or casts the United States as the Arabs’ permanent constabulary.

James Jay Carafano is a vice president of The Heritage Foundation, where he directs the think tank’s research in issues of national security and foreign relations.