Mission Failure: How the U.S. Capitol was Stormed 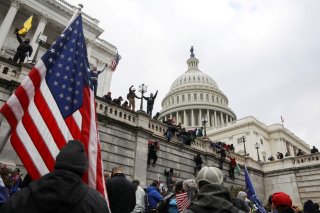 Units of the 173rd Airborne Brigade can deploy anywhere in the world on eighteen hours’ notice. So too can one of the brigades of the 82nd Airborne Division. But the DC National Guard, which certainly had at least eighteen hours notice that trouble was brewing in the Capitol, tarried for hours while rioters egged on by the president of the United States besieged the seat of America’s legislature, breaking windows and climbing through them to wander around the building at will. Washington had not witnessed such a violent assault on its federal institutions since 1814, when the British set fire to the building during the War of 1812.

Unlike the state National Guards, who take their orders from their respective governors, the DC National Guard is under the command and control of the Office of the Secretary of Defense. The policymakers in that office are a group of recently appointed “acting” officials, Trump flunkies all. Acting Secretary Christopher Miller and his minions not only did not move to mobilize the Guard in the absence of an explicit order from the White House. They apparently were not prepared even to suggest that the Guard be deployed in anticipation of the trouble that ultimately materialized in a manner no one, with the possible exception of Donald Trump, could possibly have anticipated.

Indeed, it has been reported that when DC Mayor Muriel Bowser requested that the Guard be mobilized to protect against what she sensed would be rioting and even bloodshed—indeed, a woman was shot on the Capitol grounds and has since died—the Pentagon turned her down. Its response was rather different from the haste with which it ordered National Guard units both to protect the Capitol from Black Lives Matter protesters and to deploy to environs of Lafayette Park in order to confront protesters and to make way for the president’s ludicrous photo-op in front of St. John’s Church.

In the absence of the Guard, the Capitol Police seemed overwhelmed. They did virtually nothing to prevent the rioters from climbing into the Capitol building and roaming through its halls and offices. Indeed, it was not at all clear whose side at least some of the police were on; several took selfies with those they were meant to control. And despite all the mayhem, virtually no arrests were made until after Bowser’s 6 PM curfew came into force.

Coordination of the federal law enforcement agencies responding to what can only be called an insurrection fell to Vice President Mike Pence, who had been extracted from the Capitol and whisked to an “undisclosed location.” On the other hand, once he had whipped up a crowd of his supporters to march on the Capitol—even suggesting that he might accompany them—President Donald Trump went AWOL. His silence during the first hours of the riot was deafening. When Trump finally emerged from wherever he was hiding, it was to release a video tweet in which he told his supporters, whom he said he “loved” to “go home.” Of course, he had to add the election had been stolen from him, which had the effect of enabling the rioters to justify to themselves their seditious activities.

Many leaders of America’s allies have expressed shock at the events in downtown Washington. On the other hand, the likes of Vladimir Putin, Xi Jinping, and the Ayatollahs can only be smirking at America’s misfortunes. None of this appears to matter to Donald Trump. His only concern is somehow to reverse the outcome of the presidential election, by whatever means that remain available to him. Not only will he not succeed, but as the instigator of the worst assault on America’s democratic institutions in more than a century, he has probably shattered his prospects of returning to the White House in four years’ time. And should that be the case, America will be much better for it.