Mission Not-So-Impossible: Why This Hypersonic Weapon Will Change Warfare 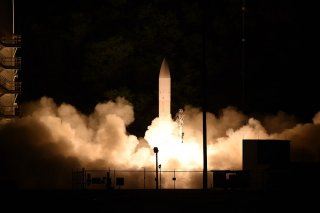 The urgency of the Pentagon’s need to accelerate and deploy hypersonic weapons is serious, according to senior U.S. weapons developers who have expressed extreme concern about Russian and Chinese weapons.

“We are number three in this race. We have to catch up,” Robert Strider, the deputy director of the Army Hypersonic Project Office, told an audience on August 11 at the Space and Missile Defense Symposium in Huntsville, Alabama. Strider was referring to fast-emerging Russian and Chinese progress with hypersonic missiles, which is a concern often discussed by Pentagon leaders. This concern is likely a primary inspiration for the Army’s current success in developing an emerging weapon called “Dark Eagle.” The new missile, known as the Long-Range Hypersonic Weapon (LRHW), will be ready for war by 2023.

By this time, Strider explained, the new LRHW will be able to travel aboard an Air Force C-17 Globemaster III to a hostile forward location, set up for a launch, and destroy enemy targets at hypersonic speeds before returning to home base. This level of independent warfare ability with hypersonic missiles, expected by 2023, will be preceded by a series of what Strider called Joint Flight Campaigns involving tests, assessments and technological refinements of the weapon.

Initial configurations include plans to deploy a missile battery of four launchers and a battery operations center. Interestingly, the LRHW is a joint Army-Navy weapon that uses a common warhead projectile for ground and maritime attacks. Each launcher contains two hypersonic missiles, indicating a total of eight LRHWs in a battery.

“Our all up round is a thirty-four-inch booster which will be common between the Army and the Navy,” Strider said. “We will shoot exactly the same thing the Navy shoots out of a sub or ship.”

Transportable on board an Air Force C-17 Globemaster III, the LRHW is intended to be road-mobile such that it can hold targets at risk from multiple changing locations to maximize surprise and speed of attack.

“We took existing trailers and modified them with hydraulics and electronics and everything associated with being a launcher,” Strider explained. “We know what these systems are capable of.”

The first missile to be shot off of a transporter will occur in 2022 as part of the Joint Flight Campaign 2.

A deployable, road-mobile hypersonic weapon could introduce an entirely new sphere of problems and complications for one of America’s adversaries. If a battery capable of firing eight LRHWs were to arrive at a secretive launching area close to a U.S. adversary with the ability to quickly power up and launch from changing locations on a mobile launcher, then that would put an adversary’s forces at great risk of destruction. Should a hypersonic weapon—one that is able to travel at five times the speed of sound— land in closer proximity to a set of enemy targets, then such a weapon could destroy high-value targets at a much faster rate and make it extremely difficult for that adversary to defend them. Perhaps most of all, having a mobile, expeditionary hypersonic attack capability in this fashion would surely make launch locations much more difficult to locate and destroy. An enemy might not have the ability to find that launch point due to the LRHW.