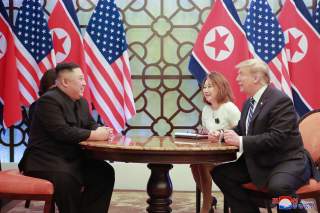 The press has universally declared this week’s summit between President Donald Trump and Chairman Kim Jong-un in Hanoi, Vietnam a “failure.” From the headlines of the New York Times and Washington Post to the Blob, Trump has been indicted for diplomatic malpractice. As Richard Haass summarized the matter: “The Hanoi summit showed the dangers of a president who over-personalizes diplomacy.”

If this were just another card in the political war between Trump and the anti-Trumpers, I would not be moved to comment. But since the issue of North Korea’s nuclear program is one that could lead to a nuclear bomb exploding in an American city, the U.S. government’s efforts to prevent that really matters. So, here are my four takeaways.

In their approach to North Korea, Trump and his secretary of state, Mike Pompeo, have departed dramatically from established Washington diplomatic practice. The reason why is best explained by a Chinese proverb: “If you do not change direction, you may end up where you are heading.” Over the past two decades, as the administrations of Barack Obama and George W. Bush followed the advice of the foreign policy establishment, what happened? A small, isolated hermit kingdom proceeded to test a nuclear device, develop missiles that could deliver nuclear weapons against American troops and allies in South Korea and Japan, produce an arsenal of as many as sixty nuclear warheads, and reach the threshold of an ability to deliver nuclear-armed ICBMs against the American homeland.

Trump and Pompeo rightly judged that to be an American failure.

In contrast, the Trump administration took a page from Ronald Reagan’s playbook in his dealings with Mikhail Gorbachev—a playbook that eliminated all Soviet intermediate nuclear forces and ultimately precipitated the collapse of the Soviet Union. In Reagan’s case, the primary target was not the items about which the United States and the Soviet Union were negotiating—numbers of warheads, missiles, etc.—but the mind of an autocrat whom he thought he could persuade to try to transform his entire country.

To understand Trump and Kim in Hanoi, remember Reagan and Gorbachev in Reykjavik. In 1986, what Reagan described as a “beautiful” letter from Gorbachev led an American president to announce a two-day summit on short notice in an out-of-the-way place in Iceland. (For the full text of this letter and other declassified documents, see “The Reykjavik File.”) The two leaders met for an hour one-on-one before pulling in their advisors for successive rounds of negotiations. But when it became clear that there were key differences in their positions, Reagan “walked away” without an agreement.

The press berated him and the summit was declared by the press to be a failure. But as Reagan’s Secretary of State George Shultz said at the time, “Reykjavik came unexpectedly close to an unexpectedly ambitious agreement.” The meeting was not a failure, but a critical opportunity for both sides to understand each other’s bottom lines.

Sure enough, what the Blob deemed a failure paved the way for what happened a year later when Gorbachev signed the Intermediate-Range Nuclear Forces (INF) treaty (which the Trump administration has recently withdrawn from) that zeroed out all the Soviet Union’s intermediate nuclear-armed missiles. In explaining his willingness to do that, Gorbachev credited the Reykjavik summit “for having given an impetus to reduction by reaffirming the vision of a world without nuclear weapons and paving the way toward concrete agreements.”

Consider Trump’s selection of Hanoi and Singapore last spring as the sites for his summits with Kim Jong-un. If the objective were to excite the imagination of the leader of one of the most impoverished, isolated nations on earth, it is difficult to imagine a more captivating venue.

Only fifty-five years ago, the United States was at war with Vietnam and Singapore was a notoriously corrupt, poor port that could have reminded one of North Korea today. Even with authoritarian leadership, they embraced the magic of market economics and integrated into the global economy, becoming economic powerhouses.

This message was surely not lost on Kim.

Putting the summit into a broader context, I am reminded of a Chinese maxim that says “a journey of a thousand miles begins with a single step.” Although the road to denuclearization is long, my bet is that history will remember the Hanoi Summit as a significant step along that road. 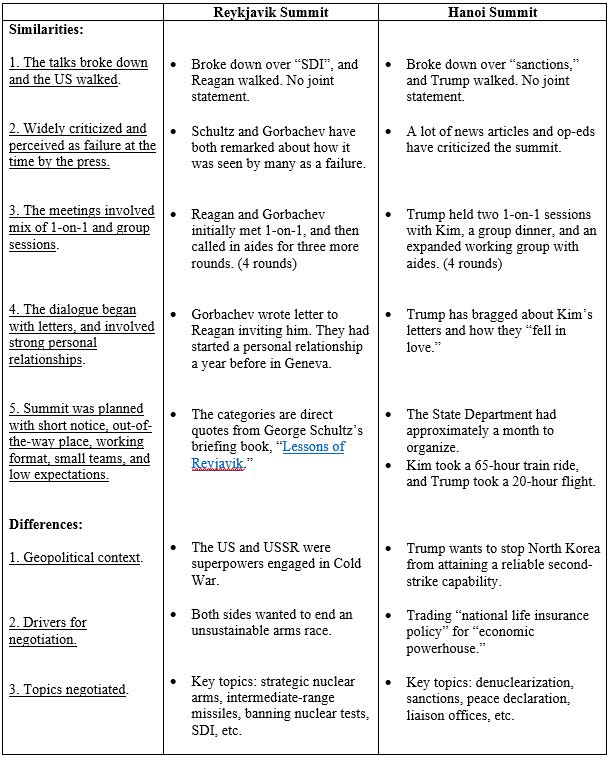