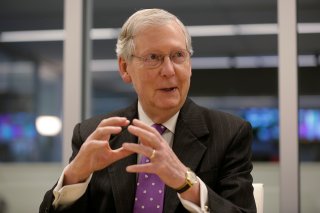 It was September 18, 2008, and the Bush administration was asking something remarkable of the House and Senate leadership: approve $700 billion in emergency bailout money for the tottering big banks or the world economy would collapse. Oh, and the funds were needed immediately, with no strings attached. “Do you know what you are asking me to do?” huffed then Senate majority leader Harry Reid, according to Congress and Its Members. “It takes me 48 hours to get the Republicans to agree to flush the toilets around here.”

The United States Senate might not be able to push the plunger in two days, but Mitch McConnell is betting it can rearrange one-sixth of the American economy in not much more time than that. After weeks of shrouded legislative drafting, McConnell is now trying to ram through his party’s freshly debuted health-care bill before Congress recesses for the July 4 holiday. That means condensing the entire process: the committees, the floor debate, the generous amendments that Senate rules allow. It also means somehow corralling a scattered Republican caucus whose spectrum stretches from Rob Portman to Tom Cotton.

To that last point, it took about an hour after the Senate bill was released for the conservative barbershop quartet of Rand Paul, Mike Lee, Ted Cruz and Ron Johnson to announce that they opposed it in its present state. Paul tagged the legislation “Obamacare Lite” and accused it of scaffolding the current failed system. Sen. Susan Collins, meanwhile, pronounced herself “concerned” over the legislation’s eventual cuts to government insurance and Planned Parenthood, while Shelley Moore Capito of Medicaid-reliant and opioid-besieged West Virginia was also noncommittal. McConnell can afford to lose only two votes, and in his deeply variegated caucus, the dissenters could come at him from either right or left.

But McConnell is also one of the shrewdest men in Washington. He surely understood the inevitability of legislative migraines when he unveiled the Senate bill, and I doubt he was serious when he floated the pre–July 4 deadline. That was more to apply pressure and ensure the skeptics don’t wear on forever. He knows the amendment process will give senators an opportunity to sculpt the legislation to their liking. He knows, too, how scrumptious the prospect of overhauling Obamacare is to his caucus—some of whom owe their seats in the upper chamber to the health-care issue; all of them have been scorned by Democrats for daring to think that repeal is possible.

Well, here they are, aren’t they? All the taunts over conservative obstruction, all the insistences that a federally administered entitlement could never be reduced, must sound like a fight song to most Republicans as they near the summit. And that’s McConnell’s most potent weapon: the political allure of crushing talismanic Obamacare. He’s hoping that will eclipse the policy objections of the moderates, as well as win back at least the showboating Cruz and the more pragmatic Johnson.

Even among the conservative four, there are divisions of opinion. For example, there’s the so-called “stabilization fund” provision, which would shovel money to the insurers in order to steady the turbulent health exchanges. Ron Johnson is worried the allotted amount won’t be enough, while Rand Paul warns of a “new entitlement.” Anticipate McConnell dangling more stabilization funds in front of Johnson, as just one example of how the individual concerns of senators could be placated. As another, the draft contains $2 billion to combat the opioid crisis, a (perhaps intentionally) low amount that could be hiked to win over Shelley Moore Capito. (McConnell need only avoid adding to the deficit, lest the parliamentarian be persuaded not to allow the fifty-one-vote threshold for reconciliation.)

This is not a full Obamacare rollback; neither is it an exercise in conservative wish listing. The stabilization fund may be its most heretical provision: $50 billion over four years given directly to the insurance companies; had it been proposed by Democrats, pejoratives like “bailout” and “giveaway” and “corporate welfare” would fly. And yes, all the old problems like the exchange death spiral would linger, even with the infusions to the insurers, and especially without the individual mandate to coerce healthier customers. Emphasis on state innovation and tax cuts can’t hide the fact that this is a rearrangement of the existing health-care system rather than an attempt to uproot it. It’s conservatism’s Burkean disposition in action, an apprehension about exploding the status quo, even if the status quo itself is exploding.

Still, given the political pit that Republicans were in just eight years ago, it’s remarkable that they’ve made it all this way. Horses will be traded in the coming days. Sausage will be made. And that just might prove enough for McConnell to squeak through his flawed creation, with Mike Pence breaking the tie. And then is the House Freedom Caucus really going to revolt again—when they’re that close? Already, Scott Wong of the Hill is reporting that House leadership may try to pass the Senate bill in its entirety, obviating the need for a conference committee. That old pugilist Harry Reid was right about Senate sluggishness, but the Upper Chamber is nonetheless on the cusp of history.