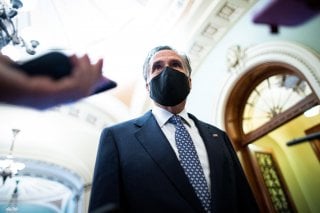 Republican Sens. Tom Cotton (Ark.) and Mitt Romney (Utah) announced Tuesday that they will introduce a plan that would gradually raise the national minimum wage and link it to inflation, coupled with a mandate to thwart businesses from hiring illegal immigrants.

“Millions of Americans are struggling to make ends meet. I’m introducing a bill with @SenTomCotton that would increase the minimum wage while ensuring businesses cannot hire illegal immigrants. We must protect American workers,” Romney wrote in a pair of tweets.

“Congress hasn’t raised the minimum wage in more than a decade, leaving many Americans behind,” Romney added. “Our proposal gradually raises the minimum wage without costing jobs, setting it to increase automatically with inflation, and requires employers to verify the legal status of workers.”

Cotton also took to Twitter to announce the bill, noting that “Congress hasn’t raised the minimum wage in more than a decade”—as it’s stood at $7.25 an hour since 2009—but the proposal wouldn’t go into effect until after the pandemic is over if it’s passed. The bill will also include “protections for small businesses,” Cotton said.

The Cotton-Romney plan comes as Democratic lawmakers are fixated on increasing the minimum wage to $15 an hour but remain split on how to navigate the push.

Senate Budget Committee Chairman Bernie Sanders (I-Vt.) has insisted that the boost to the minimum wage should be included in the next coronavirus stimulus package and passed through budget reconciliation, a legislative process that would allow Democrats to pass pandemic-related relief without Republican votes.

President Joe Biden, who made raising the minimum wage a campaign promise, embraced that a $15 an hour wage boost would be difficult to swiftly pass as part of his $1.9 trillion relief plan, though he has considered a separate piece of legislation for federal wage increases.

Economists, however, have suggested that the Cotton-Romney proposal wouldn’t help the path towards economic recovery.

“Imposing new . . . labor market regulations will stifle the recovery, and the timing for these two new regulations is particularly unfortunate given the economic situation we find ourselves in,” Stan Veuger, a resident scholar in economic policy studies at the American Enterprise Institute, said.

A recent report by the nonpartisan Congressional Budget Office discovered that a $15 an hour minimum wage would bring nearly 1 million people out of poverty during the course of the next four years but would simultaneously increase the debt by $54 billion and cost 1.4 million jobs.

Cotton and Romney’s plan also requires employers’ use of E-Verify—a federal database system that examines the identities and work-eligibility of employees in the U.S.—that aims to curb illegal immigration.

Veuger said that E-Verify “is not a system that works well.”

“There are 10 million or so undocumented immigrants in the country, many of whom have been here for many years, many of whom have U.S. citizen relatives. The prudent course of action for the Senators would be to acknowledge that reality and make policy based on that reality, instead of doubling down on a failed policy of adding red tape in hopes that these millions of people will somehow disappear,” he added.