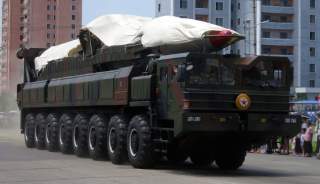 The missile test conducted by North Korea over the weekend featured several technological developments that limit the ability of the United States to destroy North Korean missiles before they launch. A preemptive military response to North Korea’s nuclear and missile programs, already fraught with difficulties and risks before the latest test, appears increasingly dangerous and unlikely to succeed. The Trump administration must account for the impact of this new missile technology as they plan America’s response to the latest missile test.

Imagery of the test indicates that the missile, called the Pukguksong-2, closely resembles the submarine-launched ballistic missile that was successfully tested in August 2016 and was cold launched from a tracked transporter erector launcher (TEL) vehicle. Moreover, the Pukguksong-2 uses solid rocket fuel unlike North Korea’s other intermediate-range ballistic missile, the Musudan, which uses liquid rocket fuel.

The tracked TEL and solid rocket fuel are the two developments that most complicate the response options of the United States, because they make the missile harder to detect and destroy before launching.

TELs are not a new technology in North Korea’s arsenal. In September 2016, the North Koreans tested three Scud-ER missiles from wheeled TELs on a paved highway. The use of paved roads for TEL transport does complicate the ability of the United States to track and target missiles before they fire, but North Korea’s poor infrastructure helps reduce this burden. In January 2017, International Institute for Strategic Studies executive director Mark Fitzpatrick and senior fellow Michael Elleman noted that North Korea has only 724 kilometers of paved roads, which significantly reduces the amount of space the United States would have to monitor in order to detect a missile launch before it happens. However, the most recent test used a TEL with tracks instead of wheels. That means that the Pukguksong-2 TEL can leave paved roads and fire from more rugged terrain, which significantly increases the amount of potential launch points that would have to be monitored.

Further complicating the targeting problem is the small footprint and quick launch times of solid-fueled missiles. According to Scott LaFoy, a missile analyst at NK Pro:

The solid fuel means that [the Pukguksong-2] can be launched with fewer support vehicles and with less lead time. Liquid-fueled missiles … are frequently fueled at or near their launch positions, which requires numerous support vehicles. Solid [fuel] is always loaded into the missile, so it is always ready to go.

The smaller support vehicle footprint and shorter time window between arriving at a launch position and firing the missile enabled by the solid fuel, combined with the expanded launch site options offered by the tracked TEL, significantly reduce the ability to track and target the Pukguksong-2.

The technical developments on display in the latest missile test reduce the feasibility of any response option that involves destroying North Korean nuclear weapons in a preemptive strike. Wheeled TELs carrying liquid-fueled missiles are still the norm in North Korea’s arsenal, but the Pukguksong-2 gives Pyongyang a more survivable retaliatory capability that can carry out a nuclear strike even if the majority of North Korea’s land-based missiles are held at risk. It is unclear how many Pukguksong-2 missiles are in service and if they have functioning nuclear warheads. But the successful test of the missile should give the Trump administration pause as it considers its response options.

The risks and potential costs of a U.S. sneak attack against North Korea’s nuclear facilities and nuclear delivery systems, or a decapitating strike against Kim Jong-un by South Korean and U.S. forces, grow as the North improves its missile technology. As the viability of the military option diminishes, the United States must find other ways to prevent North Korea’s nuclear development. Negotiating with Kim Jong-un may not seem like “winning” to Trump and his advisors, but as military options become more dangerous and harder to effectively carry out, diplomacy might offer the United States the best chance to slow or halt North Korea’s progress.

Eric Gomez is a defense and foreign policy analyst at the Cato Institute. He tweets at @EricGomezAsia.