Modern Warfare: Why the U.S. Army Must Reform 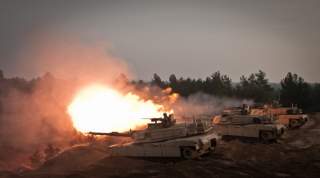 Structural reform in the military is long overdue. Thirty years ago, when the last major overhaul of the military’s structure was implemented due to the passage of the Goldwater Nichols Act, desktop computers and cell phones were largely viewed as novelty items, the Berlin Wall still stood firm, and terrorists were seen as more of a nuisance than an existential national security threat. The world has changed a lot in the past thirty years, and so has the nature of the threats faced by our military.  So far, proposals to reform the military’s structure to better address contemporary challenges have been focused on the service Chiefs of Staff and above. That should change, starting with a closer examination of the military’s largest service, the US Army.

Structural reform, hardly the stuff of cocktail hour repartee, is finally on the agendas of our most senior civilian officials. Just last month, for example, Secretary of Defense Ashton Carter unveiled a plan to reform aspects of the military’s command and control structure, and the issue is currently under discussion as Congress debates the form of the FY2017 National Defense Authorization Act. One of the themes underlying these conversations is a sense that the service chiefs have been frozen out of major decisions such as acquisition and operational planning—to the detriment of the military as a whole. Another theme is that the military has become too “top-heavy”—i.e., that the sheer number of top brass is depleting valuable resources and detracting from the agility of the force.

The tone in any organization is set at the top, so it’s no surprise that similar problems with inefficient decision-making, top-heavy commands, and outmoded organizational structures permeate into each of the services. The size of the Army alone provides reason to examine its structure more closely for inefficiencies. But, for a service that may be ‘outmanned and outgunned’ in its next war; that is shrinking while the threats that it may need to address in the future continually expand, structural reform provides a way to improve the efficacy of the Army, regardless of the resource constraints that it currently faces or may face in the future.

The changing threat environment since 1986 has also drawn the role of ground forces into question more than naval, amphibious, or air-based instruments of military power. Russia’s revanche and the ongoing conflict against ISIS notwithstanding, large land wars, a la Desert Storm or Iraqi Freedom, have become increasingly unpalatable to the civilian political class. The need for a large standing Army has thus been drawn into question, not least of all by the current administration. The Army has and is taking several steps to adapt to changing budgetary and threat environments, including undertaking projects that rethink the role of ground forces both in and out of kinetic conflict. But, so far, many of the structural problems facing the Army have received less attention.

Take the Army’s decision-making process, or rather, preoccupation with process. A Center for Army Lessons Learned-issued summary of the various decision-making processes available to Army officers opens with General Patton’s rejection of over-analysis: that “a good plan violently executed now is better than a perfect plan executed next week.” Yet the section for “analysis” alone prescribes no fewer than fourteen labor-intensive, time-consuming steps, and not explicitly following the outlined processes is blamed as a cause of bad decision-making throughout the document. Processes are important; they are what make bureaucracies tick. But a preoccupation with process can lead to an overreliance on it, which in turn can lead to a failure to adapt.

An overemphasis on process has both strategic and tactical consequences. At the strategic level, one of the primary reasons that “grey zone” issues have proven so challenging to the US Army is that they confound traditional planning models and the doctrinaire responses tied to such frameworks. At the tactical level, the implementation of the similarly rigid “tactical decision-making process” often leads to a “single tracking” of plans, which narrows the commander’s field of vision and undermines a commander’s ability to respond flexibly to changing circumstances.

A top-heavy command structure exacerbates this problem. The House Armed Services Committee’s draft of the 2017 NDAA recognizes the military-wide nature of this problem, but it’s worth examining the Army-specific trend more closely: even though the size of the total force decreased by 39 percent between 1986 and 2016, the ratio of general and flag officers to enlisted personnel increased by 26 percent during the same period. Not only does a glut of general and flag officers further complicate the decision-making process, it also reduces morale and pulls resources away from other priorities, from readiness to end strength. This problem is particularly critical as the Army continues to face cuts to its base budget and more spending is shifted to the government’s new preferred flexible spending account, overseas contingency operations—very little which has gone to personnel funding in recent years.

Inefficiency is not just a function of process or of leadership. It is also a function of inputs—and the Army, like other services, has struggled to achieve an appropriate balance between different types of forces. Take, for example, the overuse of special operations forces and the comparative operational din of their conventional counterparts. The Army has done a better job of integrating best practices from special operations forces into the doctrine of the conventional force, but the roles of each could still be better delineated to reduce redundancies of effort.

The Army’s underutilized reserve component provides another example of misused inputs. Though some argue that maintaining a large, educated officer corps better prepares the force to meet evolving, technology-driven threat environments, the harsh reality is that much of the expertise necessary to counter such threats is best represented in the private sector. For an all-volunteer military, the reserve component can serve a critical role in injecting new ways of thinking into a comparatively ossified bureaucracy and in providing a bridge between public and private sectors—but only if it is effectively leveraged.

Overemphasis on process, leadership bloat, and structural disjointedness each contribute to organizational inertia and detract from the ability to adapt. One thing that’s needed is what is referred to in management literature as organizational “ambidexterity,” in which a balance is achieved between effective organizational alignment and the ability to adapt. Because it faces many challenges at the same time, the Army must also focus on agility to improve its ability shift among threat environments with greater ease and speed.

There are several concrete steps that the Army could take to improve both ambidexterity and agility. First, it could take more seriously efforts to decentralize decision-making. Special operations units, in which many Army officers spend time at some point in their careers, generally operate with more autonomy than their conventional counterparts; there is no reason to believe that this isn’t part of the recipe for their successes. The chain-of-command is sacrosanct in the Army, for good reason, but that doesn’t mean that every decision needs to be made by the officer in charge, something that even the Center for Army Lessons Learned recognizes in its decision-making process guide.

Second, the Army should continue efforts to reduce the number of general and flag officers in its ranks, but it should also trim the number of layers within the chain-of-command in order to speed up and improve the decision-making process. This would improve the ability of Army leadership to make the decisions that cannot be delegated downward and free up resources for other pressing needs. And the savings wouldn’t just be short-term: Because of the generous sums that retired general and flag officers collect in retirement, the benefits of reducing so-called “star creep” compound over time.

Third, the Army should foster flexibility and innovation throughout every level of its hierarchy. It should take a closer look at the concept of “modularity;” the shift from divisions to brigade combat teams should be viewed as the beginning, not the end of the conversation about how the Army’s basic deployable units could become more flexible. As I’ve argued elsewhere, it should take a hard look at the way special operations forces operate for lessons on how to quickly adapt to changing circumstances. It should rethink the way that it incentivizes service in the Army reserves, especially for professionals from technical, managerial, or communications backgrounds, as the sharpest skill sets in these and many other fields lie outside of the permanent bureaucracy. It should also re-think how it uses its reserve officers once they have matriculated.

The Army is not the only part of the Defense Department that is in need of internal reform to better address contemporary threats. The officer-to-enlisted ratio of the Air Force, for example, is far worse than that of the Army, and the currently proposed Defense-wide acquisition reforms arguably do not go far enough. But given the fact that the Army is currently facing, as one author bluntly put, an identity crisis, it has the opportunity to lead the way on meaningful structural reform. Pursuing greater agility, adaptability, and ambidexterity will increase the ability of the Army to face both current and future threats, regardless of what future budgets might bring.