A Modest But Enduring Syria Strategy for President Trump 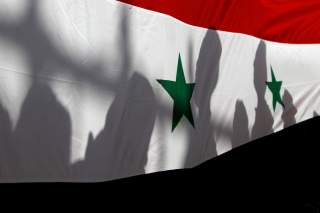 Given the latest news from Syria—more atrocities carried out by the Assad regime against civilian neighborhoods near the capital of Damascus, with strong suspicions that chemical agents have yet again been used in this tragic war—we face a dilemma in addressing this seven-year conflict that has killed half a million people and driven twelve million from their homes.

ISIS has been largely defeated militarily on the physical battlefield. Thus, the temptation for Americans may be to declare victory and go home. Indeed, Trump has reportedly told his advisors that he wants ISIS finished off and U.S. troops home from Syria within a matter of months.

Any such plan for near-term U.S. withdrawal would not be a good idea, however. Trump deserves credit for his success in Syria, but it represents only a partial and fragile achievement. ISIS is down, but it is not out. An Al Qaeda affiliate (or former affiliate) remains active in the country’s northwest. Iran and its militias have permeated much of the country. Israel’s security is at some risk as a result. Five million Syrian refugees remain abroad, continuing to place enormous strains on Turkey, Jordan and Lebanon.

Without a way to end the war and rebuild the nation, Syria is likely to remain in waste, with many of its communities destroyed beyond functionality. That would produce ongoing anger and resentment among the country’s majority Sunnis in particular. The resulting witch’s brew could give rise to ISIS 2.0—similarly to how remnants of Al Qaeda in Iraq that were not eliminated by the surge there a decade ago ultimately helped give rise to ISIS itself. A premature American withdrawal could also concede even more of the country back to the murderous President Bashar al-Assad and his Iranian allies. Our allies who fought to defeat ISIS on the ground could suffer severe retaliation.

Fortunately, while one cannot talk of any prospect of victory in Syria, there is much we can still do without a big U.S. presence or commitment. For the goals of limiting Iran’s influence, protecting our surviving allies, stabilizing the country over time, and continuing to weaken extremist groups on Syrian territory, there is hope.

In a January speech at Stanford, former Secretary of State Tillerson outlined elements of such a broader strategy. Gen. Joseph Votel, the commander of Central Command, reiterated many of these points in recent congressional testimony, and U.S. Ambassador to the United Nations Nikki Haley has made numerous statements on the topic. Specifically, Tillerson promised to sustain the military campaigns against ISIS and Al Qaeda affiliates, to continue the UN-sponsored process in Geneva that aims to produce a new government for the country, to diminish Iran’s influence in Syria, to help refugees and other displaced go home, and to ensure that Syria is free of weapons of mass destruction.

To achieve these goals, Tillerson also promised a continued U.S. role to help stabilize that part of the country that President Assad does not actually control, while also vowing not to help Assad rebuild any of the parts of the country that the brutal dictator does still control. He pledged that America would respect Turkey’s concerns about Kurdish autonomy and Kurdish terrorist groups. He further promised to expand the use of local ceasefires in Syria to lessen human suffering.

There is much to work with in this plan. But some of the goals are unrealistic and require rethinking.

The most fundamental mistake is the political strategy for ending the war. To be sure, Assad is a monster and at some point he must go. But we have no way to make him leave at present. Any serious strategy needs to recognize this core fact.

That means the United States and international community need to redefine the UN process in Geneva that seeks to create a government of national unity to replace President Assad. (Russia’s Astana process is no better; nor was the recent summit among leaders of Russia, Turkey and Iran.) The UN will not be able to negotiate Assad out of power in favor of a democratic, representative government. For Assad, this would be tantamount to defeat, at a moment when he feels he is winning on the battlefield. Since he comes from the Alawite minority group in Syria, any national government based on majority rule (whether chosen through negotiations or elections) will almost surely displace his closest allies and raise the risks of retaliation against them.

The international community cannot live indefinitely, or do business normally, with a mass murderer in the president’s office in Damascus. But we must also accept that he will insist upon having a major hand in choosing his successor through a managed transition. Russia may help us manage a transition, but it will almost surely not seek to push Assad from power; after all, Moscow intervened precisely to help him win the war. The Geneva talks should focus for now less on political transition, and more on technical issues such as providing relief and reviving agriculture.

Second, most of the other goals, such as helping refugees return and protecting civilians, will take time and only prove possible as we find a way to wind down the fighting. Diminishing Iran’s influence will take quite a while, since it requires a rebuilding of the Syrian army under a viable successor government to Assad’s. Until then, our main goal should be to deter attacks by those militias against our forces and those of our allies. In the short term, preventing Iran’s influence from expanding is a more viable objective than weakening that influence. By helping our local allies stabilize and solidify their areas of current control, we can help achieve that aim.

Third, we need a better answer to the Kurdish question that addresses Turkey’s security concerns while also preventing Kurdish positions in Syria’s north from being overrun. In additional to promoting a ceasefire between the Kurdish PKK in Turkey and Ankara, we should condition most aid to Kurds in Syria on the return of the heavier weapons given to them to fight ISIS—once that battle is truly over. Washington should declare that it will never support an independent Kurdish state in Syria (or elsewhere) and that it opposes a single, formal Kurdish autonomous region within Syria. To access aid, Syrian Kurds will also need to allow non-Kurdish towns within their broader areas of control a degree of additional local autonomy.

The realistic path forward is to help our allies in the country’s north, east, and south rebuild their infrastructure and restart their economies, while also creating local policing forces but not mobile units that could threaten Assad. We need to keep the two thousand to three thousand U.S. forces on the ground to help in this process, while also sustaining the forward air controllers and trainers needed to prevent these local allies from being overrun. Any attacks against U.S. forces should be met with retaliatory blows against Iran’s forces in Syria and perhaps even within Iran itself.

Economics may be our strongest suit in this situation. Most of the $100 billion or so in financing that the country will ultimately need to rebuild can only be found from U.S. friends and allies. That money provides a certain amount of leverage—not enough to push Assad literally out of power, but perhaps enough to coax him into forming a successor government with broader representation, and to persuade Moscow to help us in the effort (Putin has just acknowledged the importance of Syrian reconstruction). Western funds should not flow to Assad or the regions he controls until he steps down. The only exception should be limited amounts of food and medicine for humanitarian purposes, once he starts respecting ceasefires and stops massacring innocent people.

Even with these improvements, stabilizing Syria through an “ink spot” strategy of working first with local actors will take many more months. Rebuilding politics and infrastructure nationwide will take years. But our core goals of stability, recovery, and safety for Syria’s disenfranchised and displaced, limits Iran’s influence; and prevention of the emergence of an ISIS 2.0 is within reach so long as we stay engaged. It is time to broaden our Syria strategy beyond the simple and immediate defeat of ISIS.

Image: The shadows of people on a Syrian national flag are seen while they attend a peace march to mark International Day of Peace in Damascus, Syria September 21, 2016. REUTERS/Omar Sanadiki