A Modi Win: A Loss for U.S.-Indian Ties? 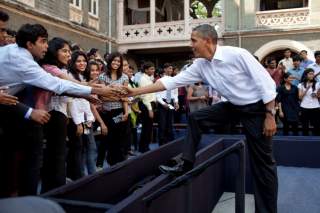 While the Obama Administration continues its heralded pivot toward Asia, it's finding that Asia itself is pivoting in new and unpredictable ways.

Nowhere is that more true than in India, where results from its five-week, nine-round national elections will be announced Friday. If polling data holds true, Narendra Modi, currently the chief minister of Gujarat state, will become India’s next prime minister, leading some form of coalition government anchored by his Hindu nationalist Bharatiya Janata Party (BJP).

If elected, Modi will join a wave of new leadership across Asia. China is just over one year into the expected decade-long rule of Xi Jinping and the ‘Fifth Generation’ of its Communist Party leadership. Indonesia will elect a new president in July, and popular Jakarta governor Joko Widodo is the strong front-runner. Old hands, like Pakistan’s Prime Minister Nawaz Sharif and Japanese Prime Minister Shinzo Abe, have returned to power in the past two years. Newer leaders, such as South Korean president Park Geun-hye and Iranian president Hassan Rouhani, are only beginning to shape their administrations. Iraq and Afghanistan are currently awaiting new governments following elections in April, and both Bangladesh and Thailand face uncertain futures after bungled elections earlier this year.

But from the U.S. perspective, Modi’s rise could be the most challenging of all. Even though the bilateral relationship is now at its lowest point since Obama took office, its current state could feel warm and fuzzy compared to what lies ahead. Among the priorities of the Obama administration in its final two-and-a-half years, the challenge of restoring strong ties with India should lie at the top of the Asia agenda. No amount of pivoting will matter much if U.S. ties to the world’s largest democracy—and, despite its current stumbles, one of the world’s largest emerging economies—lie in tatters in January 2017.

The most beguiling aspect of Modi’s likely victory is that no one knows exactly how Modi will approach U.S. relations. U.S. diplomacy is at least partially to blame for that. The rift with Modi goes back to his first months as chief minister in 2002. When a train full of Hindu pilgrims caught fire, three days of communal riots followed, leaving over 1,000 Gujarati Muslims dead. Modi’s government initially failed to stop the riots, and critics believe that Modi tacitly encouraged the massacre. Though a special 2012 investigation ordered by India’s supreme court found no evidence of wrongdoing, Modi has refused to apologize for his government’s handling of the riots (although he expressed sadness over the riots). While the Gujarati riots are perhaps the most notorious incident in Modi's past, they’re not the only thing that’s caused alarm about Modi’s commitment to the rule of law. Amit Shah, a top Modi adviser who organized the BJP campaign in Uttar Pradesh, India's most populous state, and who will almost certainly be a key figure in any Modi government, was forced to resign as Gujarat's home secretary four years ago after his arrest on charges that he ordered extrajudicial killings of suspected criminals.

Almost immediately after the 2002 violence, the worst since the 1992 Ayodhya riots, Modi became something of a pariah in the eyes of the United States and Europe. The United States revoked Modi’s travel visa in 2005 over concerns with his disregard for religious freedom. The United Kingdom effectively lifted a decade-long ban on Modi in October 2012, and while the U.S. State Department hasn’t made any definitive statement about Modi’s status, as India’s head of government, Modi might be permitted to travel to the United States.

But the main concern isn’t that Modi might be denied entry to the United States as the duly elected prime minister of a country of 1.27 billion people, or even that Modi might hold a grudge against the United States and its European allies for shunning him throughout the 2000s. Rather, it’s that Modi will favor relations with other nations rather than focus on India’s relationship with the United States. While Western governments largely turned their backs to him, Modi spent the next thirteen years inviting Chinese, Japanese, and Middle Eastern investors and officials to his state, developing relationships that would influence his foreign policy as India’s next prime minister. Nancy Powell, the outgoing U.S. ambassador to India, got around to meeting Modi for the first time only in February, and BJP officials grumble that she has much warmer ties with the leaders of the ruling Indian National Congress. Accordingly, the greatest peril isn’t necessarily that U.S.-Indian relations will become hostile so much as that Modi will simply ignore the United States and look to Japan, China and the Middle East.

Moreover, a BJP-led government would hold an incredibly different cultural orientation than the outgoing Congress-led government. In an insightful piece for The Financial Times last month, Indian-British economist Deepak Lal wondered whether Modi would be a ‘Thatcher’ or a ‘Hitler’; he argued that, unlike the Nehru-Gandhi family and other English-speaking, Western-educated, secular elites within Congress, Modi believes in ‘modernization without Westernization’. Lal ultimately concluded that Modi would be a ‘Thatcher,’ not a ‘Hitler’.

Nevertheless, Modi is a lifetime member of the Hindu nationalist Rashtriya Swayamsevak Sangh (RSS), a volunteer civil society group—critics call it a right-wing paramilitary group—that plays an important organizing role within the BJP. Despite Modi’s emphasis on good governance and economic performance, and his insistence on the campaign trail that he wants to build ‘toilets, not temples’, his government will almost certainly be influenced by “Hindutva”—the idea that India’s government should reflect Hindu values. That’s a far cry from the long-standing Nehru-Gandhi vision of a secular Indian democracy, and it’s a vision that worries India’s 165-million-strong Muslim population, not to mention India’s Muslim-majority neighbors, Pakistan and Bangladesh.

That would all be challenging enough for U.S. diplomats. But the United States is already struggling with Indian relations after last December’s Khobragade affair, wherein U.S. officials arrested, detained and even strip-searched India’s deputy consul general Devyani Khobragade on suspicion of visa fraud, escalating a minor dispute over diplomatic privilege; Indian diplomats viewed this as an instance of U.S. disrespect. In addition, the Obama administration’s attention is currently more focused on Syria, Russia, Ukraine, Iran, China and even Africa than on India, and Obama enjoys much weaker relations than former president George W. Bush enjoyed with India and with outgoing prime minister Manmohan Singh, a relationship that culminated in a major nuclear deal that recognized India as a global nuclear power and cleared the way for greater technological cooperation between the United States and India. After less than two years on the job, Powell announced just days before India’s election began that she would step down in May as U.S. ambassador, and the Obama administration hasn’t yet announced her replacement.

Many influential Americans have held the role in the past, including industrial economist John Kenneth Galbraith in the 1960s, public intellectual and eventual New York senator Daniel Patrick Moynihan in the 1970s, and former Ohio governor Richard Celeste in the 1990s. Powell’s successor should be someone of equally prominent caliber—it wouldn’t hurt if the Obama administration appointed a high-profile Indian-American businessman or even a prominent conservative whose views might align more closely with Modi’s.

No matter Modi’s initial posture to the United States, there’s some reason for the Obama administration to welcome Modi, who could finally clear the way for deeper foreign investment (creating investment opportunities for Americans as well as jobs), wider development and greater prosperity for Indians. As The Economist noted last month in its nonendorsement of Modi, the West might welcome Modi’s rise, in the absence of the 2002 riots, especially if he can truly deliver the kind of reforms that eluded Singh’s government for the past decade. While international investors once trumpeted Singh, the finance minister who enacted India’s landmark 1991-93 economic liberalization reforms, they now blame Singh, the prime minister who failed to follow up with additional liberalization. Despite recent action to open India’s retail sector to greater competition, the conventional wisdom today is that Singh couldn’t even stand up to his party’s leader, Sonia Gandhi, let alone to the rampant billion-dollar corruption and policy making inertia that’s marked his second term in power.

It would be a shame if Modi becomes the Indian leader who finally unlocked greater economic freedom while repressing religious and political freedom. The United States, its allies and other international organizations can and should play a role in championing the importance of religious freedom in India, as well as greater gender equality and security in India.

The U.S. government need not absolve Modi’s past sins and failures in order to cheer on the kind of economic and governance rupture that Modi promises. Moreover, given the long-standing concern over Islamic militants in Pakistan and the still-unsettled tensions between India and nuclear-armed Pakistan, including the future of Kashmir, deep U.S.-Indian cooperation is vital to global security. In order for the United States to maximize its role in the Modi era, however, the Obama administration needs to find a way to move beyond the Khobragade affair, appoint a strong envoy to India, and work to restore the bilateral ties that the two countries shared less than a decade ago.