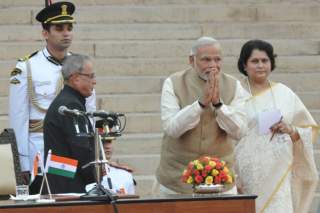 Narendra Modi has taken the helm in New Delhi—and with the freedom of action provided by a parliamentary majority unmatched in India for three decades. So what sort of policy will he pursue toward China?

The question is worth exploring for several reasons.

Modi is an ardent nationalist who believes that India is destined to become a great power and has chided previous Indian governments for supineness toward Beijing. Moreover, India and China are longtime adversaries. The mutual professions of brotherly love in the 1950s proved short-lived, and the 1962 war was a humiliating debacle for New Delhi. In India’s national security establishment, and the country more generally, China is considered the principal threat.

Modi is not, however, breaking new ground. His predecessor, Manmohan Singh, visited China in October 2013, and the trip included the signature of “Border Defense Cooperation Agreement” designed to avert crises. Chinese premier Li Keqiang was in India—his first visit abroad after taking office—last May. On the economic front, two-way trade amounted to nearly $65 billion in 2013 compared to a mere $3 billion in 2000. China has become India’s top trade partner, though the substantial surpluses it racks up ($31 billion last year) rankle New Delhi.

Modi doubtless sees China as the main antagonist but he knows as well as anyone that the balance of power heavily favors Beijing. India’s GDP is about 35 percent of China’s, its defense budget less than 37 percent. Whether it’s infrastructure, foreign-investment inflows, living standards, education, technology or military might, China leads by a wide margin. So initiating a confrontational policy toward Beijing would be a fool’s errand. Whatever else Modi may be, he’s no fool.

Among the problems between India and China is the border dispute, and twice last year (in April and December) Chinese troops crossed the line of control in the western (Aksai Chin) sector, offering reminders that it remains a potential source of war. For China, the Aksai Chin region (in the western sector) matters most: it connects Xinjiang and Tibet, regions in which anti-Han nationalism has been increasing. New Delhi maintains that China occupies 43,000 square kilometers of Indian land in the west; in the east, Chinese claims encompass 90,000 square kilometers of Arunachal Pradesh.

Beijing would likely accept a swap agreement under which India forfeits its claims in Aksai Chin in exchange for China’s doing the same in Arunachal. But given his nationalist convictions, Mr. Modi won’t go for this formula—certainly not anytime soon. There’s no reason for him to ignite a firestorm of controversy, even assuming, for argument’s sake, that he believes that some version of an east-for-west deal is the only realistic solution. Perhaps there will be some such bargain if he governs for more than one term. But India must improve its economic and military position relative to China if it is to have adequate leverage in negotiations. Modi, a shrewd bargainer, knows this.

The upshot is that Modi’s strategy toward China will likely consist of the following elements:

First, attacking the main impediments to sustaining the double-digit economic growth China has enjoyed for many of the last thirty-five years. Modi will seek to expand economic ties with Japan, Europe, South Korea and the United States. But don’t rule out China. Modi has been open about his admiration for its economic success. When serving as Gujarat state’s Chief Minister (2001-2014), he visited China four times, and courted Chinese investment—and, by creating a business-friendly setting, attracted more of it than did any other Indian state.

Moreover, aside from its importance as a trade partner, China has invited India to join its Maritime Silk Road initiative (initially aimed at the ASEAN states) and touted the Bangladesh-China-India-Myanmar economic corridor. But it’s one thing to be a chief minister and another altogether to be the prime minister. It remains to be seen whether Modi, now that he is the latter, will spurn these ventures, or even limit trade and investment ties with China, to avoid the possible strategic downsides.

Second, modernizing India’s military forces and defense technology. Russia has been India’s largest arms supplier by far since 1954, and Modi will be forced to rely on it despite New Delhi’s complaints in recent years about uneven quality and cost overruns. He will, however, look more to Europe, the United States and Israel, accelerating India’s efforts at diversification. (Russia’s recent decision to resume arms sales to Pakistan may be a not-subtle warning.) As India’s Congress-led governments have done, Modi’s will insist on contracts that include coproduction and joint research and development so as to increase India’s capacity for arms production.

Third, continuing New Delhi’s “Look East” policy, which seeks to forge economic and security ties with East Asian countries, particularly those unnerved by China’s ascent and by doubts about Washington’s staying power and willingness to protect them if the going gets rough. The policy has been in place since 1991 and extends to Australia, Indonesia, Myanmar, Vietnam, Singapore and Thailand. Modi will continue it, promoting trade and investment ties, intelligence cooperation, and arms sales and military assistance progress (which are already in evidence in Myanmar and Vietnam).

His problem will be, as it has been for bygone Indian leaders, that India’s economic and military weaknesses reduce the reach and punch of this flanking strategy aimed at China. Simply put, India cannot now provide a counterweight to the states—especially Vietnam, with which it has close security ties—mired in high-voltage disputes with Beijing over sundry islands in the South China Sea, which is becoming a Chinese lake.

Though India and Vietnam are jointly exploring offshore energy deposits, some in waters claimed by China, India wouldn’t be able to come to the rescue if Hanoi got into a real fight with Beijing. As tensions have mounted, New Delhi has threatened to dispatch naval units to defend its assets, but China knows it holds the advantage and remains unmoved. More generally, while India considers China to be a serious threat, the reverse just isn’t true.

Keep an eye on Indo-Japanese security ties if you’re looking for shifts. Change was in the air even before Modi’s electoral victory. Japan’s defense minister visited India for consultations in 2013. In January, Prime Minister Abe attended India’s Republic Day celebrations as the chief guest. In July, Narendra Modi plans to visit to Tokyo at Abe’s invitation. In 2012 and 2013, Japan conducted naval exercises with India. This year, Japan eased its ban—in place since 1967—on military exports. This move could have far-reaching consequences for defense cooperation between New Delhi and Tokyo. Most Asian countries oppose Abe’s plans for a more muscular defense policy; India welcomes it. Count on Modi to be especially enthusiastic.

Fifth, Modi will revive the momentum for an Indian-U.S. strategic partnership that was built up, especially under George W. Bush, but has since lost pace. He will seek increased trade with and investment from the United States, but will have to modernize India’s infrastructure and corral its corruption to reap real dividends (ditto for economic ties with Japan and Europe). He will open India’s arms market even more to America, increase cooperation on security and continue the joint “Malabar” naval exercises that started in 1992 (and have, on occasion, included Japan and Australia). But don’t expect anything resembling a U.S.-Indian alliance. China is near; America is not. Why provoke Beijing when the deterrence value of the Washington connection can be gained through transactions that don’t amount to an alliance?

The upshot? Expect a Modi grand strategy that features more continuity than transformation.

The power-relevant area that will most prominently bear his stamp is economic policy. When it comes to India’s security and its standing in the world, to say nothing of the millions of Indians who still live in privation, that’s precisely what the priority ought to be.

Rajan Menon is the Anne and Bernard Spitzer Professor of Political Science at the Colin Powell School, City College of New York/City University of New York, and Nonresident Senior Fellow at the Atlantic Council.