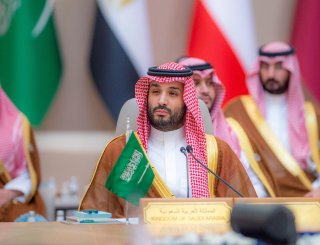 Meeting with the leaders of Saudi Arabia, Kuwait, Bahrain, Qatar, Oman, the United Arab Emirates (UAE), Egypt, Iraq, and Jordan in the ballroom of Jeddah’s seaside hotel on Saturday, President Joe Biden asserted that the United States would not cede the Middle East to China or Russia. Biden declared: “We will not walk away and leave a vacuum to be filled by China, Russia or Iran.” Coming on the heels of an escalating great power competition for the region amid the Ukrainian crisis, this statement, according to the White House and U.S. media, was meant to soothe Arab concerns about America’s commitment to the region and human rights.

The president outlined a five-part “new framework for the Middle East,” which includes supporting economic development, military security, and democratic freedoms. The New York Times emblazoned on its website that “many in the Arab world are doubtful about long-term U.S. commitments. A shift toward focusing on confronting Russia and China has been disquieting for nations that have long counted on the United States for security.”

Before joining the Jeddah Security and Development Summit, Biden separately met with the leaders of Egypt, Iraq, and the UAE. This followed a previous day of meetings between American and Saudi officials, including a meeting between Biden, Saudi king Salman bin Abdulaziz Al Saud, and Crown Prince Mohammed bin Salman (MBS). Western media paid much attention to the body language of the meetings and the fist bump between Biden and the crown prince. Public and private observations were widely made about how Biden had changed his disposition from making Saudi Arabia a “pariah” following the murder of Saudi journalist Jamal Khashoggi, which was reportedly ordered by the crown prince, to seeking to reinforce Saudi-U.S. relations. Aides to the president emphasized that unfolding world events “have left him little choice but to deal with the kingdom.”

In fact, according to the New York Times, American officials announced a wide range of accords with Saudi Arabia, including expanding oil supplies, building 5G telecommunications networks, opening Saudi airspace to Israeli commercial flights, and extending a truce in Yemen. No doubt, these accords underscore the mutual desire of both nations to reinforce their relationship. One can also safely argue that the other leaders participating in the Jeddah Summit also hope to enhance their relationships with the United States. But that does not mean entering into an alliance with the United States against Russia and China or boxing them out of the Middle East.

To be sure, the Biden administration and most Western media have an inaccurate picture of the region and incorrect assumptions about what Arab countries want or worry about, including those regarding confrontation with China and Russia or the possibility they will fill a vacuum left by the United States. Traced to the U.S. invasion of Iraq, Arab disposition toward U.S. foreign policy has been mixed at best, most recently bordering on questioning the very essence and viability of American foreign policy.

Saudi Arabia witnessed in disbelief the U.S. invasion of Iraq in 2003. Saudi officials opposed the invasion and deemed that the Bush administration’s plan for a democratic Baghdad was a figment of their imagination, only reinforcing Iran’s regional power. They were disheartened by the Obama administration’s secret talks with Iran, which eventually led to the Iran nuclear agreement, formally known as the Joint Comprehensive Plan of Action (JCPOA). And as much as they supported the Trump administration and applauded its withdrawal from the JCPOA, they were disheartened by the administration’s refusal to punish Iran and its proxies for attacking the kingdom’s major oil facility. In the meantime, Arab countries were not blind to Washington’s revised strategic doctrine, which identified China as the major challenge and called for the United States to reorient its focus on Beijing.

Subsequently, Biden criticized former President Donald Trump’s withdrawal from the JCPOA as a “self-inflicting disaster,” and his administration signaled its intention to return to the JCPOA. In a conciliatory move, Washington sanctioned the release of frozen Iranian assets in Iraq. It initially acted on its campaign pledge to end U.S. support for the Saudi-led offensive in Yemen against the Iranian-backed Houthis, which has deepened a catastrophic humanitarian crisis. The administration temporarily froze arms sales to both Saudi Arabia and the UAE and reversed former Trump’s designation of the Houthis as terrorists. No less significant, the UAE has perceived the Caesar Act and sanctions against Damascus as harmful to the Syrian people, as well as obstacles to the UAE’s attempt at rehabilitating and cooperating with the Syrian regime. In fact, Saudi Arabia and the UAE have consistently perceived that the U.S. interest in Syria, as reflected in the small contingent of American forces there, has been more about denying a Russian victory in Syria than about fostering a solution to the Syrian Civil War. Arab rulers and peoples then viewed in disbelief the chaotic American withdrawal from Afghanistan, ending America’s longest war.

From an Arab standpoint, this inconsistent American foreign policy has created an aura of uncertainty about the United States. In fact, both allies and foes of the United States in the Middle East have perceived that America’s withdrawal from the region is not only a product of its strategic reorientation towards China but also a manifestation of Washington’s declining power. Needless to say, the United States stood as the historically unmatched and undisputed power in the world in 1990. Three decades and two failed wars in Iraq and Afghanistan later, even America’s own allies believe its global position is declining.

The corollary of this situation has led Arab Gulf countries to try to recalibrate their relationship with the United States by seeking policy alternatives not necessarily congruent with U.S. policy in the Middle East. Central to this shift has been the readiness and aptitude of Russia and China to challenge American policy there.

No sooner did the kingdom and the UAE feel perturbed by the uncertainty consequent upon Washington’s policy than Moscow sent its foremost diplomat, Foreign Minister Sergey Lavrov, to the Gulf in early March 2021. Lavrov visited Saudi Arabia, UAE, and Qatar, underscoring to them the readiness of his country to fill the void Washington was leaving behind with its gradual geopolitical withdrawal from the Middle East. Lavrov highlighted the benefits of grounding the Arab Gulf-Russian relationship in mutual politico-economic interests, especially in the security-military-technical realm. Reportedly, Lavrov emphasized to the Gulf leaders Moscow’s readiness to provide them with the sophisticated S-400 anti-aircraft missile system and help them build their own nuclear plants, as Russia has already done with Turkey. Lavrov also underscored that Moscow’s relationships with both Iran and Turkey, adversary and rival to Saudi Arabia and UAE, respectively, are neither geopolitical strategic alliances nor strategies designed for competing with the Arab Gulf. No less significant, Lavrov stressed the mutual interest of the Arab Gulf and Russia in bringing Syria back into the fold of the Arab League.

Similarly, Beijing, capitalizing on Washington’s umbrella of security in the Persian Gulf, has successfully challenged the United States economically. Today, China is the Persian Gulf countries’ biggest trading partner. China has signed a multitude of agreements with the Arab Gulf countries worth billions of dollars. The Chinese language has become an essential subject in both the UAE and the kingdom’s curriculum, emphasizing the importance of Arab Gulf-China relations.

Significantly, Washington’s global approach and sanctions against both Russia and China due to their policies toward Ukraine, Crimea, Hong Kong, and Xinjiang have led them to deepen their cooperation, not only to withstand American challenges and pressures but also to roll back American influence in the world.

It is against this background that Russia invaded Ukraine, ending the post-Cold War era and ushering in a new world order whose geopolitical impressions have not yet been defined. Although Russia’s invasion of Ukraine and war tactics are condemnable, NATO, led by the United States, has pursued a policy toward Russia that is, for all practical purposes, aimed at militarily and economically defeating Russia and pushing it out of Western civilization. However, American calls on the international community to sanction Russia have gone unanswered by many countries, including the Arab countries.

Clearly, Washington’s political mantra that the war in Ukraine is about democracy versus autocracy is a reductionist strategy. It goes beyond the democracy-autocracy divide. It’s becoming about the United States’ global position, with many countries refusing to join the U.S.-EU political bandwagon. The global split over Ukraine is nowhere near the Cold War East-West split.

Nevertheless, against a backdrop of a major war, rising inflation, a worsening global food crisis, and increasing energy prices, NATO and G7 leaders recently met. Leaders at both summits pledged to support Ukraine “for as long as it takes,” and the G7 leaders’ communiqué criticized China. These summits have clearly deepened Russian and Chinese beliefs that the West, led by the United States, poses a strategic threat to both of them.

Correspondingly, since the eruption of the Russo-Ukrainian War, Arab leaders have been careful to walk a fine line between the NATO countries on one side and Russia and China on the other. Significantly, Arab Gulf leaders, led by the Saudi crown prince, saw opportunities in the crisis and its global repercussions, manifesting in Washington’s reconsideration of the paramountcy of the Arab Gulf as a strategic area. More specifically, absent an Arab cold war pitting Arab conservatives against Arab nationalists, MBS is clearly attempting to assume the leadership of the Arab world. In fact, the very essence of hosting Biden and convening the Jeddah Security and Development Summit is about legitimizing himself as the new Arab leader who will restore Arab unity and global influence independent of the great powers’ alliances.