Montenegro's Corrupt Party of Socialists Is Killing the Country 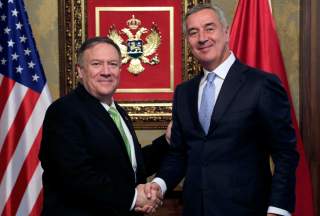 Largely unnoticed in the wake of events in the Middle-East and the impeachment drama, another crisis is brewing in the Balkans. In Montenegro, thousands of people have been protesting a new law passed by the Montenegrin parliament and signed into effect by the country’s longtime strongman, Milo Djukanovic, which gives the government authority over properties that religious organizations in the country have been using for at least a century. Evidence of the problems the controversial new law creates can be seen in the widespread condemnation it has received from individuals such as Pope Francis, Ecumenical Patriarch Bartholomew, and Russian Orthodox Patriarch Kiril.

Djukanovic’s motives are fairly transparent. Economically, the new law allows Djukanovic’s kleptocracy to take control of hundreds of properties used by the Serbian Orthodox Church while simultaneously politically weakening the only organized institution left in Montenegro capable of posing a serious threat to his rule. (Public opinion polls show that the Serbian Orthodox Church in Montenegro by far enjoys more trust than the country’s president, government, parliament or judiciary.)

Ultimately, Djukanovic’s plan is to turn over church properties with no economic value to an uncanonical organization under his control, led by a defrocked charlatan fond of hitting old women.

The current protests in Montenegro, however, are only a symptom of a conflict that has been long in the making. Remarkably, NATO’s newest member is the only former communist European country that has never had a democratic transition. Even in Belarus and Russia communists have been out of power for at least one electoral cycle. But Djukanovic’s ruling Democratic Party of Socialists (DPS), which is just the renamed Montenegrin League of Communists, has been in power continuously since 1945.

Djukanovic has managed to stay in power so long by constantly reinventing himself and changing with the times. In 1991, as a protégé of Slobodan Milosevic, Djukanovic ordered the bombardment of Dubrovnik. Yet today, there are people in Washington who hail Djukanovic as an “elder statesman,” and he is feted in Washington’s foreign policy salons. In 2014, Joe Biden welcomed him to the White House.

While enjoying so much popularity in Washington, however, Djukanovic has turned Montenegro into his feudal fiefdom. As a recent New York Times article put it:

[Djukanovic]. . . is now the longest-serving leader in Europe, in power longer than both Vladimir V. Putin in Russia and Recep Tayyip Erdogan in Turkey . . . The president’s sister is the nation’s top lawyer, helping foreign investors join in the building boom sweeping across the coast. His brother owns First Bank, the country’s largest financial institution. His son runs the country’s biggest power plant. His nephew is involved in the country’s largest tourism projects.

Thanks to such machinations, as Moisés Naim has argued, Djukanovic has turned Montenegro into a “mafia state.” Thus, according to Naim, leading government officials are actually “integral players in, if not the leaders of, criminal enterprises, and the defense and promotion of those enterprises become official priorities . . . the national interest and the interests of organized crime are now inextricably intertwined.” Indeed, one prominent democratic opposition figure in Montenegro has aptly called Djukanovic’s system-of-rule “Montenegrin Putinism.”

In 2015, Djukanovic’s success in turning Montenegro into a mafia state led to his being named “Man of the Year in Organized Crime” by an international anti-corruption watchdog group. As the award announcement noted, “this as a lifetime achievement award.” Nobody outside of Putin has run a state that relies so heavily on corruption, organized crime and dirty politics. It is truly and thoroughly rotten to the core.

An audit of the Djukanovic family bank by Price Waterhouse Coopers has revealed one of the many mechanisms by which corruption in Montenegro operated. First, public funds were deposited with First Bank, which then provided loans to Djukanovic associates and well-known organized crime figures, such as Darko Saric, a prominent Balkan drug dealer. Another tactic has been for Djukanovic cronies to acquire state-owned enterprises, fleece them of their value, and then declare them legally insolvent. According to one report, by November 2015, 89 percent of the state-owned enterprises that had been privatized by Djukanovic had reportedly gone bankrupt.

Apart from financial corruption, Djukanovic has used various means of illegal electoral engineering to stay in power. These tactics have run the gamut from voter fraud to blackmail, demobilizing potential opposition voters, fear-mongering, threatening police violence, and outright vote-buying. Anti-corruption watchdogs believe up to 15 percent of the votes in the October 2016 elections were fraudulent.

Lastly, attacks on independent media and critical voices have also been a hallmark of Djukanovic’s system of rule. Djukanovic once said that investigative journalists should be “exterminated like mice,” and someone in Montenegro clearly got the message. In 2004, the editor of the opposition newsmagazine Dan was assassinated. In August 2013, investigative journalist Tufik Softic was the target of a bombing attack. In December 2013, an explosive device was detonated outside the offices of Vijesti, an independent daily in Podgorica. In October 2015, Jovo Martinovic, a journalist covering Montenegro’s organized crime scene, was jailed for fifteen months on trumped-up drug-smuggling charges. In April 2018, a car bomb exploded outside the home of investigative journalist Saed Sadikovic. In May 2018, Olivera Lakic, a journalist reporting on corruption, was shot outside her apartment in Podgorica.

Yet despite this organized terror campaign the country’s independent media, Reporters Sans Frontieres would note in December 2018 that  “All of the attacks on journalists in the past two years have gone unpunished.”

Apart from outright physical attacks, Djukanovic and his surrogates also resort to various smear campaigns against their opponents. For people who think that Donald Trump’s comments about women are beyond the pale, Djukanovic takes things even lower. In 2015, Djukanovic launched an attack against one of Montenegro’s leading anti-corruption activists, Vanja Calovic, literally accusing her of having sex with dogs. To its credit, the U.S. Embassy in Podgorica named her “The Most Courageous Woman in Montenegro” in 2016.

As evident from the above, the nature of Djukanovic’s rule has ranged from the depraved to the corrupt. At times, however, it has also been farcical. The primary example of this was seen in the events surrounding the so-called “Russian-backed coup plot” in Montenegro in October 2016.

Indeed, the story of the so-called Russian-backed coup attempt becomes more absurd the more one analyzes it. It is worth noting, for instance, that the alleged coup attempt was at least the third such “attack on the state” that has happened on the eve of elections in Montenegro in recent years. And the absurdities just compound from there.

The alleged organizer of the coup, Sasa Sindjelic, was a high-school drop-out wanted for murder in Croatia who hadn’t been to Montenegro in fifteen years. Yet the GRU supposedly tasked such a marginal figure to organize a coup (on three week’s notice) against a regime that had been in power for some three decades. Not surprisingly, in March 2019, Sindjelic renounced his testimony altogether, revealing that the story had been coerced out of him after twenty-three days in solitary confinement and numerous beatings.

The other central actor in the alleged plot, Mirko Velimirovic also renounced his story in April 2017, after which he had a serious “car accident” and decided it would be better for his health to testify again. Yet under cross-examination his testimony quickly fell apart; Velimirovic, for instance, could not identify the weapons he had allegedly bought (and which have never been produced), nor could he identify the mysterious Albanian black marketeer he supposedly bought the weapons from.

The other alleged participants in this third-rate Balkan cabaret were similarly farcical; as one report put it, most of those arrested were “elderly and in ill-health.” The comedic highpoint of the proceedings came with the testimony of an alleged coup-plotter (in real life a self-confessed drug addict), who was tasked with breaking windows and throwing Molotov cocktails at a political party headquarters—but he got the address wrong. During his confused testimony, the alleged coup-plotter claimed, “Actually, I don’t even know what I was supposed to do. The only people I know here work for the government.”

Surprisingly, considering the supposedly grave danger facing the country, neither the interior minister, nor the defense minister, nor Montenegro’s Council for National Security were informed about such an unprecedented threat. Nor did Montenegrin officials inform NATO that they had discovered a Russian-backed plot against their country. Even Djukanović said that he only found out about the alleged affair from media reports. As Montenegro’s interior minister himself noted somewhat incredulously in the days after the discovery of the alleged coup attempt was made public “There has not been a meeting of the government or of the Council for National Security, the state president has said that he does not want to comment, the prime minister said that he does not know anything about it or that he does not have enough information . . . I have to admit that this is a very specific ‘coup d’etat’.”