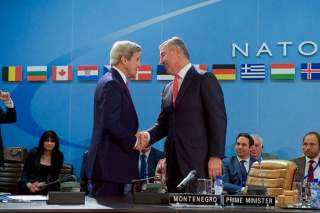 As Americans and Europeans remain transfixed by every tweet, cough, sniffle and old video clip associated with the upcoming U.S. presidential elections, other events are happening that may affect the future of our European allies. For that, we ought to direct some of our attention to national elections in Montenegro on October 16.

Though many have never even heard of Montenegrin parliamentary elections, we ignore the tiny Adriatic nation at our own peril. While it is true they are not electing the leader of the free world, their selection of prime minister is of vastly outsized importance to its population of just under 650,000.

That is because under the steady expansion of NATO eastward since the Cold War ended, the Alliance signed the paperwork for Montenegro’s accession earlier this May. Which means that the world’s most powerful military alliance of twenty-eight nations with a combined total defense budget of around $900 billion is signing up our troops to defend a tiny Balkan nation.

Montenegro is also one of the world’s newest states. Previously part of Yugoslavia, it gained independence from Serbia in 2006.

It is also one of the most notoriously corrupt. As Transparency International’s country summary begins, “Corruption remains one of the key challenges that Montenegro faces in the process of its further democratization.”

James Bond fans may recognize Montenegro as the backdrop for “Casino Royale,” the so-called Monte Carlo of Eastern Europe. By all accounts, what goes on behind the scenes at the highest levels of government is a Hollywood filmmaker’s dream come true.

And that’s quite disturbing.

The concern goes far beyond NATO allies paying the agreed upon 2 percent of national GDP on defense spending. Only five are currently meeting those obligations: The United States, United Kingdom, Poland, Estonia and Greece.

No, this problem goes much deeper.

Admitting Montenegro to NATO “as is,” without meaningful reforms, and now for the West to allow poorly supervised parliamentary elections with insufficient monitoring is a risky business simply for the level of corruption and related liabilities it incurs.

Some analysts even call Montenegro a “mafia state.”

So how bad is it?

Just a quick primer on Montenegro’s strongman, prime minister Milo Djukanovic, and his family is eye opening. Even getting past the fact he has ruled Montenegro for twenty-five years, his attacks on the free press have allowed corruption to fester while undermining a Western-style democracy. So much so that Freedom House wrote an open letter to Djukanovic in 2014 chastising him with the reminder that when he visited the White House earlier that year, Vice President Joe Biden “emphasized the importance of strengthening democratic institutions” in Montenegro’s aspirations to join NATO and the EU.

Since NATO accession is a done deal, we ought to know what we’re getting in Djukanovic as his list of corruption runs long and deep.

According to court documents revealed in Italian and Swiss trials in 2009, Italy’s anti-mafia commission implicated Mr. Djukanovic for a cigarette-smuggling ring, which allegedly laundered over $1 billion in profits. Moreover, it was not mere hearsay; the evidence presented in court included hundreds of pages of transcripts from wiretapped conversations, law enforcement reports and subsequent indictments. Yet Djukanovic was not charged directly because of diplomatic immunity as the head of state.

Djukanovic’s sister, a powerful attorney named Ana Kolarevic, involved him in a Telecommunications bribery scheme in which Magyar Telekom, a Hungarian company, acquired Montenegro’s state-owned enterprise. Under U.S. law, since Magyar trades on the New York Stock Exchange, it along with parent company Deutsche Telekom of Germany, was ordered by the U.S. Justice Department and Security and Exchange Commission (SEC) to pay nearly $64 million in criminal penalties. During the settlement, Magyar admitted to dispensing roughly $9 million in shadow contracts to bribe “at least two government officials” in addition to Kolarevic.

Montenegro as a personal ATM.

According to a joint report by the BBC and Organized Crime and Corruption Reporting Project (OCCRP), a 2010 Price Waterhouse accounting audit showed that the Djukanovic family and their associates treated Montenegro’s Prva Bank, a.k.a. “First Bank,” “like an ATM machine.” The scheme involved his sister and brother setting up a bank in 2006 and quickly turning it into Montenegro’s second largest financial institution. Then it issued massive loans backed by government funds to the Djukanovic family and cronies. Which were of course not repaid, forcing Prva to go bankrupt by 2008.

Dusko Jovanovic, the editor-in-chief of Dan, the opposition newspaper, was shot and killed outside his office in Montenegro’s capital, Podgorica, in 2004. Even though the family’s lawyer asked the court to issue a summons for Mr. Djukanovic, that request was denied.

Montenegro has become a major hub for arms trafficking in Europe, not unlike other former Yugoslav republics. This is what happens when the black market runs amok in countries with poor internal security and large weapons caches left over from former powerful militaries.

Predictably, semiautomatic weapons and stores of ammunition are falling into the hands of Islamist terror networks and sympathizers throughout Europe. In the wake of the Paris terror attacks last year, French authorities believed the Kalashnikovs came from the Balkans. Just a tiny fraction of the estimated four thousand military-grade weapons smuggled from places like Montenegro into France.

Despite Djukanovic’s track record of corruption and mismanagement on display for all Montenegrins to see, he dismisses periodic mass protests as Moscow-inspired rabble rousing, orchestrated to keep the country out of NATO. These dismissals ring hollow considering all his pro-NATO critics.

From the NATO perspective, given all the potential liabilities in Montenegro accession, it raises serious questions as to why leaders in Brussels would move forward in the first place. What gives?

Perhaps part of the reason is that since Croatia and Albania were admitted into NATO in 2009, Montenegro is now the only patch along the Adriatic Sea that isn’t part of the alliance. Given Montenegro’s strategic location and non-aligned status, NATO military planners do not want to risk leaving any flanks exposed, which is understandable from a purely military perspective.

Yet admission into NATO cannot be a license to steal elections. NATO is an alliance of democracies. Beyond meeting military standards, Washington and Brussels must insist that aspiring countries adhere to Western democratic values, including commitments to government transparent elections, free speech, rule of law, and anti-corruption measures.

Mr. Djukanovic must be sent clear signals. First, NATO isn’t a “get out of jail free” card. Second, he must not be allowed to steal the elections. And third, he must realize he is not above the law, and the world is paying attention.

Djukanovic should also accept that Montenegro has seventeen political parties, not one. His ruling Democratic Party of Socialists (DPS) must be held accountable to ensure a free, fair and transparent process. The United States and the EU should maintain close contact with all political forces of the small republic – not just with the ruling Godfather. This minimum would be expected of an NATO invitee. American and European leaders should help see to it.