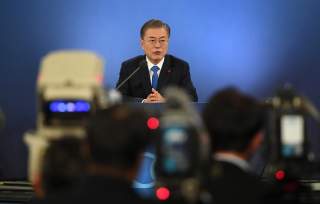 The second summit between President Donald Trump and North Korean Chairman Kim Jong-un is less than three weeks away. The summit is to be followed by a fourth inter-Korean summit. These two summits come on the throes of Kim’s recent visit to China to meet with President Xi Jinping. Meetings between Kim and Russian President Vladimir Putin and perhaps even Japanese Prime Minister Shinzo Abe could come next. The main winner of this flurry of diplomatic activity? South Korean President Moon Jae-in. For a key goal that he is seeking during his presidency is to make diplomacy and engagement the de facto choice for all parties with a stake in Korean Peninsula affairs.

Diplomatic activity in recent weeks suggests that the United States and North Korea are fleshing out an agreement whereby Pyongyang would take concrete steps towards denuclearization in exchange for real incentives from Washington. This would be very welcome, for it would kick-start the step-by-step process necessary if North Korea is to seriously consider complete denuclearization. U.S.-North Korea engagement also provides support for inter-Korean reconciliation, a goal arguably more important to Moon and most South Koreans than denuclearization.

From Moon’s perspective, however, the process is as important as the outcome at this stage. North Korean denuclearization, if an option at all, will take many years to achieve. Nuclear expert Siegfried Hecker suggests that the process would drag for over a decade. Similarly, reconciliation will also take time. Seventy years of Korean division will take years if not decades to heal. Simply put, Moon knows that neither denuclearization nor reconciliation will be achieved during his non-renewable five-year tenure. This is why he sees his mandate as setting the conditions for “permanent peace” in the Korean Peninsula. In other words, a diplomatic process leading to a more open North Korea that does not pose a threat to South Korea or America.

Central to this goal is to fundamentally transform the relationship between Washington and Pyongyang. This requires shuttle diplomacy between both, which explains why Moon himself—and South Korean officials more generally—regularly travel back and forth between the United States and North Korea. Memories of heightened tensions in 2017 culminating in North Korea’s sixth nuclear test and a Hwasong-15 intercontinental ballistic missile test have not faded in Seoul. Relations between Washington and Pyongyang could once again move towards verbal attacks, nuclear and missile tests, and renewed threats of war. Shuttle diplomacy helps to prevent this.

In Trump, South Korea has been blessed with a U.S. president willing to engage directly with Kim. It thus makes sense for Seoul to continue to promote diplomacy at the highest possible level. But South Korea knows that this state of affairs might not continue once Trump leaves office. Hence why the meetings between Moon and Kim starting in April 2018 are as important—if not more—than the Trump-Kim summits. It is easy to forget that the two Koreas had only held two summits in the sixty-five years between the end of the Korean War and 2018. Moon and Kim held three in five months last year. This is a fundamental change in the geopolitics of the Korean Peninsula, for it symbolizes the beginning of a new, diplomacy-driven relationship between both Koreas.

Equally relevant, a large majority of the South Korean general public supports Moon’s North Korea policy. Moon’s popularity has risen whenever he has met with Kim. In addition, perceptions about the North Korean leader have improved thanks to last year’s flurry of diplomatic activity. Reconciliation seems within reach in a way not seen after previous, stand-alone inter-Korean summits. Very importantly, support for Moon’s approach towards North Korea cuts across the political divide. Even if South Koreans doubt whether North Korea will denuclearize, they support engagement, a peace treaty and reconciliation.

The result is that Moon’s successor, once elections are held in 2022, is very likely to continue down the diplomatic route. Absent a North Korean provocation in the form of nuclear or missile tests or an attack on South Korea, such in 2010 when North Korea sunk the Cheonan and shelled of Yeonpyeong island, there will be no incentive for the next South Korean president to move towards a policy of isolation or confrontation. A shift away from inter-Korean rapprochement could re-start bickering between Seoul and Pyongyang and, possibly, between the latter and Washington. Few in South Korea would want a repeat of 2017 tensions.

The implication for America is that a move away from diplomacy and a return to pressure, maximum or not, is becoming ever more difficult regardless of the state of its relationship with North Korea. Politically, it would be counterproductive for Washington to be seen as spoiling inter-Korean reconciliation and the potential for denuclearization. In practical terms, pressure would not work without having China on board. Moreover, Beijing has no real incentive to enact sanctions on North Korea as long as inter-Korean diplomacy is moving ahead and North Korea is not engaging in nuclear and ICBM tests. Seoul knows that inter-Korean engagement constrains the options available to the other actors in the Korean Peninsula.

Diplomacy at the highest level is very likely to suffer from hiccups. It might even stall at some point, thus why Moon is promoting inter-Korean engagement in all areas as well. This explains the importance of the Kaesong liaison office, which allows both Koreas to discuss a range of issues at the working level. Some three hundred meetings have been held since the office formally opened in September 2018. Having a permanent base to discuss inter-Korean matters makes it easier to promote cooperation.

Holistic inter-Korean engagement starts with cultural and sports exchanges, the lowest-hanging but still important fruit. Joint teams including the female ice hockey team that competed at the PyeongChang Winter Olympic Games and the male handball team put together for the recent World Cup are helpful in this regard. But more promising from Moon’s perspective is the joint inter-Korean bid to host the Olympic Games of 2032. The bid, if and when officially submitted, will be a symbolic driver of inter-Korean cooperation at least well into the 2020s when the host is selected.

Regular inter-Korean engagement involves the militaries both sides of the 38th parallel as well. Last June, the Koreas held their first general-level talks since 2007. Meanwhile, a series of military confidence-building measures following from the Panmunjom and Pyongyang summits of last year are the initial steps in what has the potential to become a proper inter-military engagement process. Indeed, the 2018 Ministry of Defense White Paper did not label North Korea as an enemy for the first time since 2010. Engagement in the military field will necessarily have a positive impact on reducing military tensions in the Korean Peninsula. For example, recently retired U.S. Forces Korea Commander Vincent Brooks is a strong supporter of the current diplomatic process unfolding in the Korean Peninsula.

However, it is economic engagement that is the area with the greatest potential to fundamentally transform inter-Korean relations and, as a result, the relationship between the United States and North Korea. Dating back to March 2013, Kim’s North Korea has been following a policy of byungjin or parallel development of its nuclear programme and the economy. In April 2018, Kim announced that North Korea had successfully completed its nuclear programme and would concentrate on economic development. Seoul believes that Pyongyang is serious about it. But Seoul also knows that North Korea will not successfully develop its economy unless it receives substantial foreign investment and help from outside experts. This gives South Korea considerable leverage, for it is best positioned to provide and mobilize both unless Pyongyang wants its economy to be dominated by Chinese companies. There is no indication that Kim wants this.

Full-scale inter-Korean economic engagement is of course contingent on the gradual removal of United Nations and U.S. sanctions on North Korea. But there is confidence in Seoul than sanctions relief will eventually come, and that South Korean chaebols and small and medium enterprises will benefit from North Korea’s economic opening up. If and once proper inter-Korean economic engagement starts, U.S. companies are likely to want to benefit as well. After all, this is what they sought to do once China, Vietnam and, recently, Myanmar opened up. Inter-Korean economic relations would, therefore, serve as another pulling factor supporting diplomacy in the Korean Peninsula rather than confrontation. This includes Kim, who would see the benefits for North Korea from engaging in Northeast Asian and international economic flows.

Moon would, of course, like for the diplomatic process involving both Koreas and America to proceed more quickly. But his policy has always been to set the conditions for diplomacy to continue well beyond his time in office. This means setting conditions beyond between both Koreas, which South Korean presidents can drive as Moon is doing now. Moon wants to set the conditions between Washington and Pyongyang, who have seen previous engagement processes end up in mutual recriminations. Thus why “Peace, a new start” was the slogan of the first inter-Korean summit between Moon and Kim last April. The South Korean president knows that his most realistic goal is to start the process leading to permanent peace in the Korean Peninsula.