Moonrise: The Next South Korean Leader and How He Will Govern 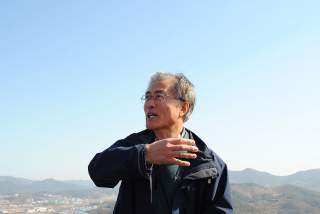 In the 2012 South Korean presidential election, Moon Jae-in lost to Park Geun-hye. Now, a snap election has Mr. Moon positioned to be the next president. With the political right in disarray due to Park’s removal from office and the splintering of the political party she once led, the stage is set for the political left to take power again in the Republic of Korea. Why this will happen and what the likely short-term results will be on the Korean peninsula?

Kim Dae-jung was the first popularly elected liberal president in South Korea, serving as president from 1998–2003. South Korean presidents can only serve one five-year term in office. President Kim was succeeded by another liberal, Roh Moo-hyun, who served as president from 2003–2008. The end of President Roh’s term gave way to a resumption of conservative rule in South Korea. The party of Park Geun-hye has controlled the governing agenda regarding domestic and foreign policy for most of the last decade. Lost in the analysis of Park’s impeachment and removal is the political change that occurred in South Korea last year. On April 13, 2016, the elections for the National Assembly resulted in a narrow victory by the liberal opposition (Democratic Party). This result defied the polling data and dealt a blow to Park’s ruling party. Another surprise was the emergence of the People’s Party, a centrist and reform-minded third party that won a surprising share of seats in the assembly. The center-left controls the National Assembly and in conjunction with votes from the now splintered conservatives, led to 78 percent of the representatives in the National Assembly voting to impeach President Park in December. Now, the Democratic Party has chosen Mr. Moon to be its standard-bearer in the May election. The People’s Party is the vehicle of Ahn Cheol-soo who briefly sought the presidency in 2012 as an independent reformer. The political right is struggling to have a candidate poll in the double-digits. In the South Korean election system, the popular vote winner obtains the only prize up for grabs. This is why the Moon versus Ahn dynamic is the only matchup worthy of discussion. The conventional wisdom and polls have Mr. Moon winning the election, which will be proven correct when the voting occurs on May 9. When he quit the 2012 race, Mr. Ahn endorsed Moon Jae-in. While there are differences—mainly in domestic policy—between the Democratic and People’s Party, they are not great enough for the political left to be fragmented at the polls. Moon Jae-in was President Roh’s chief of staff and as such is heir to an entire political movement. The party of Mr. Ahn will play an important role in the National Assembly after the presidential election, because it will be a coalition partner with the Democratic Party (the current National Assembly sits until 2020). In the short term, his political movement is not strong enough and his brand is not distinct enough from that of the Democratic Party. The headwinds of change are in the air, which is why the established leader of the strongest opposition party will win the election in May.

Once in office as the twelfth president of the Republic of Korea, Moon Jae-in will have his work cut out for him. He will largely win with the vote of those under forty years of age. There is a serious generational divide in Korean politics (as exemplified in the 2012 election) and economic concerns are of great interest to the younger age groups which will lift Mr. Moon into the Blue House. With that in mind, economic issues will be at the forefront of the governing agenda. Domestic changes are likely to include conglomerate reform, the enactment of job creation policies, and the adoption of pro-labor domestic policies. An easy fence economic fence to mend would be relations with China. Formal relations between Beijing and Seoul began in 1992. Since then, trade ties between the two nations have grown tighter and China is now South Korea’s number one export and import partner. The same realpolitik that guided a resumption of relations between these two countries will guide a Moon administration to cease utilizing THAAD. Candidate Moon is stating that he will review the deployment of THAAD, a decision which was made by Ms. Park in 2016, months prior to her impeachment. As a candidate, Mr. Moon is walking the tight rope required to win a campaign where mudslinging is the norm. But, given that his current position is the most likely to deviate from present circumstances, one can assume that the handwriting is on the wall. The best way to follow through on promises to improve the economy and standard of living for his constituency is for Mr. Moon to smooth over relations with Korea’s largest trade partner. Domestic reforms are likely to take time, so until those policies are implemented, the easiest way to soothe the economic situation is to obstruct THAAD. This would bring to an end China’s current objections and any hint of a trade war between the two nations. It won’t hurt that a resumption of normal economic activity will help to fulfill his campaign promise of a better economy for his people.

Relations with Pyongyang are also being hotly debated as the climate on the Korean peninsula remains volatile. The last Inter-Korean Summit between the two Koreas was held in 2007 during President Roh’s administration. He continued what was known as the “Sunshine Policy” towards North Korea which resulted in greater engagement between Seoul and Pyongyang. This policy was abandoned by Roh’s successor and Ms. Park. As the heir to President Roh’s political legacy, Mr. Moon has indicated that he wants to have dialogue with North Korea and is willing to negotiate with Kim Jong-un. While predicting the behavior of a North Korean leader isn’t something one can rationally examine, the inevitable change in strategy from South Korea’s perspective is. Moon’s realpolitik approach of dealing with North Korea as it currently is and being willing to pursue détente is an obvious change from prior policy. President Park agreed to the deployment of THAAD, having adopted a harder stance towards North Korea once in office. Washington’s “strategic patience” and the Obama administration itself were in their eighth and final year when the deployment was agreed upon. A new approach to dealing with North Korea is already on display by the United States. While discontinuing THAAD would ruffle feathers in Washington, a different dynamic is already in place given that both the U.S. and South Korea have new leaders in 2017. Changing tone in order to get North Korea to the negotiating table is in everybody’s short-term best interest. This is Mr. Moon’s goal in changing his country’s approach to dealing with the Kim regime. Having the threat of unilateral action by the United State may not hurt in nudging Pyongyang to the table. But, if multiparty talks can emerge from Moon’s willingness to seek a new approach, then Washington and others will be satisfied with this development. A summit between Korean leaders is not unthinkable with a liberal South Korean administration in power. For Moon, cooling tensions on the peninsula and dialing back the threat of conflict is a second important way that he can reward voters for electing him.

Much has changed since the last time he sought the presidency, but Moon Jae-in has the opportunity to pursue domestic reforms, economic growth and a new approach to foreign policy. The most likely outcome on the domestic front will be liberal reforms. In regards to economic growth, friendly ties with China will help to provide an easier path to prosperity for South Korea. Engagement with North Korea could be a way to ease tensions on the Korean peninsula. This may be done in a way that allows Washington to have flexibility in relation to its new foreign policy approach. Perhaps his greatest challenge may be restoring confidence in a fragile democracy after the embarrassing Park scandal. Either way, Mr. Moon will have the opportunity to transform his country, and the world will be watching.

Tom Eck is an American who currently serves as a Lecturer at Dongbei University of Finance & Economics in Dalian, China. He holds a master's degree in public administration and earned a graduate certificate in international affairs from Texas A&M University.