A Moratorium: The First Step to Stabilizing the “Post-INF Treaty World” 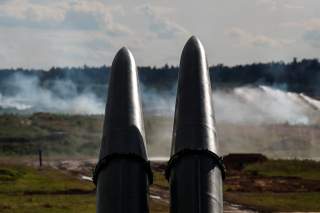 It’s been over a month since Russian President Vladimir Putin sent letters to the leaders of the United States, NATO states and a number of other countries urging them to announce a moratorium on the deployment of intermediate-range and shorter-range ground-based missiles in Europe and other regions similar to our voluntary commitment.

Our initiative could help minimize the destructive consequences of the INF Treaty’s demise. For more than 30 years the treaty served as one of the key pillars of the arms control regime and eliminated two classes of ground-based missiles with ranges from 500 to 5,500 kilometers.

Back then, at the end of the 1980s, people primarily in European countries felt a sense of relief. The elimination of so many missiles (1846 in the USSR, 846 – in the U.S.) gave hope for an improvement of East-West relations.

Since then dozens of years have passed. Many countries have been developing weapons systems banned by the INF Treaty for Russia and the U.S. New security threats have emerged. New centers of power have arisen that no one can ignore. Moscow understands Washington’s concerns like no other. However, the demise of the treaty was a misstep--the situation could have been resolved at the negotiating table.

The way the U.S. arranged its withdrawal from the INF Treaty was also disappointing. Washington didn’t have to explain anything to anyone. However, it was clear that its one-sided steps to abandon the JCPOA, withdraw its signature from the Arms Trade Treaty, dangerous plans to further develop missile defense, including its space-based elements, refusal to ratify the CTBT raise concerns even among the closest U.S. allies. That is why it was so important to find a formal excuse to scrap the INF Treaty.

In this situation, Washington decided to take advantage of the issues amassed by Russia and the U.S. over the treaty. While completely ignoring Moscow’s concerns (they are well-known) the administration designated the Russian 9М729 missile as the INF Treaty “spoiler.”

Our country faced a powerful propaganda campaign. We can’t deny that it achieved certain results: European countries in absence of any convincing evidence simply “took for granted” American allegations on Russian “wrongdoings.” We strongly believe that in international security issues one must act on facts, not mere conjectures.

We tried convincing our U.S. counterparts not to make any rushed decisions, suggesting the initiation of a serious expert dialogue. The Russian Defense Ministry took unprecedented transparency measures, which in fact were not required by the treaty. However, all our efforts were futile. Nobody even considered our arguments that the range of the 9M729 missile was within the INF limits.

Russia’s “violation” of the treaty became a smokescreen for U.S. intentions to rebuild its arsenal of ground-based intermediate-range missiles in order to achieve its political goals set – for now – in the Asia-Pacific region. The key words being “for now.” We’ll see what will happen in Europe.

Such actions seem not only to contradict the interests of the U.S. national security but also negatively impact global stability.

Russia, which highly values the historic role of the INF Treaty in maintaining Euro-Atlantic security, never raised the issue of abandoning the agreement. Only when in February Washington suspended its obligations under the treaty, our country was forced to riposte with a reciprocal measure. Nevertheless, we always kept the door open for a constructive dialogue.

However, our American partners had no interest in resolving mutual disagreements. “Carthage had to be destroyed” – on August 2 the U.S. withdrew from the INF Treaty. On August 18, the Pentagon tested a ground-based cruise missile for a range exceeding 500 kilometers. The fact that the test took place just 16 days after the U.S. withdrawal from the treaty, confirmed our long-held fears that the U.S. had been developing weapons banned under the treaty for some time.

The use of a universal Mk 41 launcher during the test proved the validity of our claims over the U.S. implementation of the treaty while it was still in effect. As was shown on August 18, these launchers - deployed as part of the Aegis Ashore missile defense system in Romania (a similar one is planned for fielding in Poland in 2020) - are capable of firing Tomahawk cruise missiles.

Moreover, since August 2 U.S. officials have made several statements on intended deployment – “as soon as possible” – of new missiles in the Asia-Pacific region. Their argument is that such a deployment will help deter China and, therefore, bolster the security of forward-based U.S. forces and American allies.

Such logic is a simplification that has little to do with objective reality. People who stand behind it do not consider the impact of such actions on the military-political balance of power in the region and global strategic stability. Beijing already responded to Washington’s statements by promising to strongly defend its national security interests. The question is how U.S. plans will be received by regional countries that have intermediate- and shorter-range missiles.

A threat of a massive missile and nuclear arms race in the Asia-Pacific region is a direct consequence of the American pursuit of military superiority at the expense of the security of other states. It’s hard to understand how potentially upsetting the regional security architecture and escalation of tensions meet the interests of the U.S. or its allies.

Russia, for its part, cannot ignore Washington’s actions, which may undermine regional and international stability. The potential deployment of U.S. ground-based intermediate-range missiles in the Asia-Pacific region will directly affect our national security interests. The region is close to the Russian borders, and Russian Navy infrastructure and Pacific Fleet bases, where strategic submarine forces are stationed. The deployment of new American systems there will threaten our nuclear deterrence potential.

There is no guarantee that the next U.S. step will not involve fielding similar systems in Europe. Therefore, as Russian President Vladimir Putin stated, we are forced to review potential threats and take comprehensive measures for a reciprocal response.

That said, we have no interest in an escalation of tensions in Europe, the Asia-Pacific region or anywhere else. We will not get involved in a costly arms race. Such actions benefit the security of no country, including the United States. Tensions lead to unpredictability, which in turn requires additional investments in defense. This dangerous spiral goes on forever. It’s time to put an end to it. That is why we have strong confidence that the interests of the U.S. and other NATO countries will benefit, at the very least, if they declare a moratorium similar to the Russian one.

What do we hear in response? Washington officials who brush aside our proposal to join the moratorium use the following “argument” –9M729 missiles, which allegedly violated the INF treaty, “are already deployed” in the European part of Russia. Therefore, Moscow is “being sly” about its proposal. We have to reiterate that our missile has never been tested for a distance surpassing the 500-kilometer limit and, therefore, a priori could not violate the treaty. That means that there is no contradiction to our moratorium. All statements of the U.S. and its allies to the contrary are simply groundless.

Russia will continue to demonstrate a responsible approach and a readiness to an equal and constructive dialogue with the U.S. After the loss of the INF Treaty - a fundamental element of arms control architecture, it is vitally important to try and preserve the only Russia-U.S. agreement still in effect in this area – the New START. Amid diminishing predictability and transparency in military-political relations of the two largest nuclear powers, the role of the New START in maintaining strategic stability and international security has never been more essential.