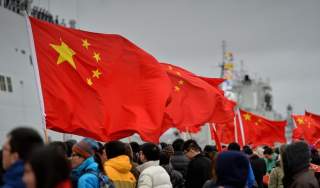 China’s brazen and “improper airmanship,” buzzing an American surveillance plane in the skies above the East China Sea last week, is but the latest signal of Beijing’s proclivity for risk and willingness to undermine both its regional reputation and economic stability in order to stake expanding claims in Asia.

Western observers have not relinquished the perennial hope that China’s global economic interconnectedness will constrain its proclivity to military conflict. But this belief is misguided and not borne out by history. In fact, as China’s economic and military power rise, it has shown an increased tolerance for risk and raised the likelihood of future war.

China has repeatedly harassed Indonesian, Vietnamese and Philippine ships in the latter’s territorial waters, claiming that Chinese citizens have been fishing there “since ancient times,” entitling them to vast maritime sovereignty. Its island construction on top of shallow reefs is another component in Beijing’s strategy to assert dominance over the South China Sea.

The near-collision of the Chinese fighter jet with the U.S. spy plane last week follows a string of gutsy, high-risk encounters. Only last month, two Chinese jets flew within fifty feet of an American EP-3 reconnaissance aircraft over the South China Sea.

Gregory Poling, director of the Asia Maritime Transparency Initiative at the Center for Strategic & International Studies, commented, “It’s clear that China’s tolerance for risk has risen in the last several years and remains high, though luckily below the level at which deadly force is likely.” Despite high-level progress from Beijing and Washington on a Code for Unplanned Encounters at Sea (CUES) in recent years, the Chinese People’s Liberation Army (PLA) may be testing the strategic limits of the outgoing Obama administration’s patience.

Poling added, “What is most worrying to me is that it took less than six months for Beijing to violate the air-to-air annex to CUES that Presidents Obama and Xi inked during the latter’s visit to DC. That suggests that no matter how hard we might try, China is not willing to have its behavior in disputed waters bound in any way, including by bilaterally agreed-upon rules and norms.”

Do Chinese military forays in the East and South China Sea signal Beijing’s clear quest for regional domination and the inevitable ratcheting up of tensions with other Pacific powers? Will increasingly risky provocations lead to military conflict as China stakes its claims? Or does China’s dependence on global trade for continued economic growth at home preclude war in the foreseeable future?

The past has repeatedly proved wrong those who assume that a rising power’s economic connectivity obviates the inevitability of great power military conflict. Peacenik theorists of the pre–World War I era opined that the level of interconnectivity in global markets had rendered obsolete the great-power warfare of the eighteenth and nineteenth centuries.

Likewise, in the interbellum period before the breakout of World War II, advocates of appeasement wagered that a militarizing Germany would not threaten continental peace due to its deep economic ties with the rest of Europe. Obviously, both schools of thought overestimated the ability of global economic connectivity to deter military aggression.

What makes scholars think China is different today? Of course, the scale of interpenetration of global markets has risen and bound major powers such as China and the United States, as well as regional groupings like the Association of Southeast Asian Nations (ASEAN), ever more tightly together. But just as proponents of peace were proven wrong in the twentieth century, echoes of the past are perceivable in Asia and Europe today.

Despite its dependence on the EU for revenue from gas exports, Russia invaded Crimea and eastern Ukraine in 2014. Likewise, European dependence on Russian gas has not prevented the EU from leveling heavy sanctions against Russia for its bellicosity. Nationalist impulses often trump economic considerations that would otherwise impel autocrats toward moderation.

Just as the Communist Party in Beijing is beholden to a public whose education hammered home the lessons of a “century of humiliation” at the hands of Western imperialists, Russia’s Vladimir Putin’s legitimacy—and mythos—flows from a narrative of western domination that has prevented Russia from attaining the greater world power that Russians feel their nation deserves.

Similarly, though Beijing is investing in massive infrastructure projects across Southeast Asia and pursuant to the sixteen-member Regional Comprehensive Economic Partnership free-trade agreement, Beijing’s behavior indicates that it will prioritize security interests over regional economic integration, peace and stability.

Material facts dictate that China’s increasing economic wealth and concordant military might will allow Beijing to exercise greater power in its backyard and on the world stage. These factors afford the CCP a greater ability to risk reputational and economic costs to achieve its national security goals.

China has shown its capability to drive a wedge in ASEAN to suit its purposes. In 2012, with Cambodia chairing ASEAN, tensions in the South China Sea became so acute that the regional grouping failed to deliver a joint statement for the first time in history since its 1967 founding. Facing a barrage of diplomatic pressure from Beijing, the ten member states were unable to agree on whether to mention even the location of a Philippines-China standoff at the Scarborough Shoal, claimed by both sides and occupied by the Philippines until Chinese ships seized it in 2012.

Beijing similarly undermined ASEAN unity in April when it announced that it had come to an agreement with Cambodia, Brunei and Laos—to the surprise of others—that the South China Sea dispute should not jeopardize relations between China and ASEAN.

The United States supports ASEAN centrality as a strategic bulwark against China’s attempts to impose unilateral faits accomplis. For its own reasons, Beijing prefers to deal with ASEAN claimants one-on-one so as to reduce the capacity of the group to stand with a unified voice contra its security interests.

Satu Limaye, director of the East-West Center in Washington, has written, “Instead of serving as a platform to manage bilateral and multilateral cooperation among member states, ASEAN may become an arena where bilateral and multilateral cooperation are contested.” As the two superpowers battle for influence within ASEAN, China has demonstrated its ability to use both charm and threats to advance its interests.

Moreover, as Nick Bisley of La Trobe University writes, despite a U.S. China policy that blends containment with moral suasion, “it is far from clear that China can be contained or cowed into submission.” Ultimately, “the region’s two major powers have irreconcilable visions for Asia’s future.”

If that is the case, expect rocky times ahead as differences of interest not only manifest in further naval and air confrontations, but also introduce further friction into competing visions of the economic and security architecture of Asia. The result is a net loss for all countries concerned.