With More Troops in Afghanistan, Focus on Reintegration, Not Reconciliation 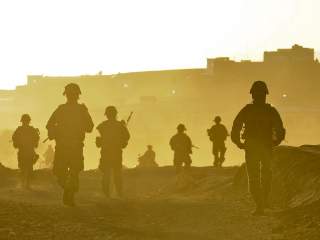 As the United States searches for a strategy in Afghanistan, a near consensus exists that military power alone cannot defeat the Taliban, making a political resolution of the conflict both necessary and inevitable. It is important to deploy more troops to the country, not because that action will force the Taliban to eventually reconcile in a power-sharing arrangement, but because it buys time for the reintegration process to yield threads of success. Theoretically, reintegration will allow for Afghanistan to gradually wean off the Taliban’s mid-level commanders in the leadership council from the Taliban’s hardcore ideologues, which would then make it possible for the country avoid negotiating a political settlement with the terror group.

The Taliban senior leadership remains dedicated to realizing an Islamic emirate in Afghanistan. Although that ideology has evolved over time, it would be unwise to expect the Taliban to compete in democratic elections, take cabinet positions, and respect the rights of minorities and free media. Therefore, a negotiated agreement that incorporates more Islamic values within the country’s constitutional democratic framework—which also somehow preserves most of Afghanistan’s social and economic gains since 2001—is unlikely. The Taliban don’t just seek to gain control over the political system, they want to change it. Had the group simply wanted a share of power, then its leaders would have come to the table long ago. The movement’s ascendant ideologues reject popular legitimacy and democratic accountability, viewing them as placing the will of the people above that of God. Even the Taliban’s so-called pragmatists—those possibly prepared to entertain a political outcome—seem unwilling to compromise on core principles.

Earlier this year, the Afghan government signed a peace deal with the notorious warlord Gulbuddin Hekmatyar, welcoming him to Kabul after more than twenty years. This accord was promoted as offering precedence for making peace with the Taliban, but it does not. Hekmatyar’s relations with the Taliban during his armed opposition to the Kabul government were mostly frayed. Though a hard-line Islamist, Hekmatyar has never sought to establish an Islamic emirate. Whether against his fellow mujahideen in the early 1990s, the Taliban in the mid-1990s, or the U.S.-supported Karzai administration after 2001, Hekmatyar has always fought for power for himself and his party rather than for institutional or ideological transformation. The deal he signed with the Ghani regime was far too generous for someone who could neither claim political legitimacy nor mount a serious threat to the Afghan state. It is the agreement that has elevated his significance and given him an opportunity to resume the role of a disruptive figure in Afghan politics. Indeed, Hekmatyar poses a far greater challenge to the stability of the Afghan government from the inside than he ever did from the outside.

Attempts to reconcile with the Taliban through a grand bargain are probably as unwise as they are unrealistic, and certainly more so as the movement’s control over—or contesting of—Afghanistan’s countryside continues to expand. While such expectations of the strategy to increase troops should be ruled out, it should be noted that Afghanistan could still use a nonmilitary route to achieve a peaceful, stable and united country. Reintegration is one option that could move the country toward those goals. It would require gradually weaning off Taliban field commanders and their foot soldiers from the Taliban movement. It would necessitate regional deals capable of leading those men toward laying down their arms and melding them back into the country’s political and social life. Seeing the prospect of being materially better off and able to satisfy local grievances would help to overcome Taliban loyalties. Senior Taliban leadership would then find themselves marginalized and unable to pose a serious military threat to the Kabul regime.

A successful reintegration strategy would be based on conditions that do not presently exist. To create those conditions, the government must win back the confidence of the Afghan people, and leaders must achieve reconciliation among themselves. Political and constitutional reforms are imperative to reinforce the legitimacy of the current government. Real progress can only occur by addressing the corruption that has torn apart the social, economic and political fabric of Afghanistan. Overdue legislative elections must take place in 2018 and presidential elections be conducted as planned in 2019. Election delays cause disunity in the executive branch and concerns over the concentration of power in Kabul. Additionally, the country needs a stable economy to sufficiently grow and attract investment, create jobs and stem the exodus of skilled Afghans.

All of these developments take time and are contingent on a qualitative improvement of performance by Afghan security forces and their ability to fend off attacks on the country’s population centers—something that can be achieved with the assistance of additional foreign troops. Inept command, poor training, corruption and insufficient air support have made it increasingly difficult for the Afghan forces to hold territory without the support of those foreign troops. Afghan forces casualty and attrition rates are at a record high, and the fighting morale is generally low. That is why increasing the number of American and allied troop levels in Afghanistan—and their terms of engagement—are essential elements of a minimalist maintenance strategy, one that could buy time for reintegration.

So how realistic is this prospect, and why should we be hopeful about its potential success? Why, after sixteen years, is it worth betting that a largely dysfunctional Afghan government might now pull its act together? Political disarray in the country seems to be on the rise, and public despair about the country’s future is also mounting. Reform efforts to date are sluggish at best. Many people would also point out that the Kabul government has already officially promoted a policy of reintegration, which has yielded poor results. That said, the outcome of that reintegration effort could be explained as premature in the absence of enabling conditions.

In time, additional foreign military commitments to Afghanistan could allow for several developments to create favoring conditions for reintegration and put greater pressure on Kabul to deal with the country’s corruption. Also, countries that have invested in Afghanistan may grow increasingly impatient and likely increase their demands for economic and electoral reforms. Afghan officials may revive their interest in reintegration efforts once they realize that a deal with the Taliban isn’t possible, and bickering power brokers may feel pressure to pull together as threats to the capital and regional centers continue to rise. Additionally, continued dissention within the Taliban movement may create new opportunities to reduce its strength and the number of its fighters. Investing more time and energy in Afghanistan could create the conditions necessary for the country to become more sustainable, improve the quality of its government and change the political calculus of regional actors—most notably Pakistan. If progress is made toward cleaving off Taliban field commanders from the herd, then that could diminish Pakistan’s ability to use Afghan insurgents as a foreign-policy tool and lead to a reassessment of the Taliban and Haqqani Network as assets.

Still, despite all the potential progressive changes that reintegration might bring, there are slim odds that it will be successful. The Kabul government and its international backers are left, for the time being, with staying the course in the hope of outlasting the insurgency. In the end, the best argument for pursuing reintegration may be simply that there are no shortcuts to ending the Afghan conflict, and that reintegration is probably the last, best hope for Afghanistan. There is too much at stake for the Afghan people and the security of the region to write off that possibility.

Marvin G. Weinbaum is the director of the Center for Afghanistan and Pakistan Studies at the Middle East Institute and professor emeritus of political science at the University of Illinois at Urbana-Champaign. He tweets at @mgweinbaum.

Moh. Sayed Madadi is a Master’s candidate at Stanford University’s Ford Dorsey Program in International Policy Studies. He was previously a Fulbright scholar at New York University and a Hurford Fellow at the National Endowment for Democracy. He tweets at @madadisaeid.

Image: Soldiers and Airmen return to base after a patrol Nov. 1, 2010, near the city of Qalat, Afghanistan, in the Zabul Province. The Provincial Reconstruction Team Zabul is composed of Air Force, Army, Department of State, U.S. Agency for International Development and Department of Agriculture personnel who work with the government of Afghanistan to improve governance, stability, and development throughout the province. Flickr / U.S. Central Command