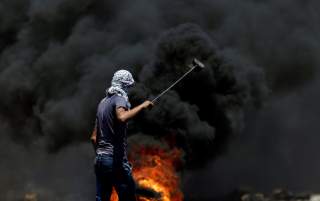 Once again, realism is in vogue. Apparently the White House is quite fond of the Peloponnesian War and wants to use it as a guidepost for contemporary foreign-policy challenges. If this feels like déjà vu, you’re not alone. Foreign-policy scholars have been invoking Thucydides since the 2003 Iraq War, when Washington-as-Athens comparisons were all the rage.

But like the second Bush administration, Trump’s Middle East foreign policy is a betrayal of the realist tradition. In demonizing Iran while aligning with Saudi Arabia, Egypt and Israel, Trump has committed the United States to an unrestrained regional competition that observers rightly warn will lead to war. Since this administration has already misinterpreted the Peloponnesian War, we might instead look to other realists, like Hans Morgenthau, for guidance on how the United States should navigate a multipolar and unstable region. If Washington wants stability in the Middle East, then it should seek a balance of power grounded in a common moral framework acceptable to all nations.

Morgenthau’s Politics Among Nations is most famously known for its Six Principles of Realism. Nathan Sears correctly illustrates how Morgenthau assumed that statecraft was guided by national interests defined in terms of power and that states should always temper their moral claims with political prudence. These principles have been interpreted to mean that realism requires an unflinching appraisal of the world as it is, without being blinded by liberal fantasies of universal justice.

But if power politics must act as a brake on morality, then the opposite is also true. In his third principle of realism, Morgenthau argues that the pursuit of interest-as-power is “determined by the political and cultural environment.” In other words, states should constrain their use of power based on the moral standards acceptable to others around them. And as that moral context changes along with the international system, then how power ought to be used will change as well. Morgenthau even leaves open the possibility that the primacy of sovereign states—one of the classic assumptions of realism—might not be applicable in the future. “Nothing in the realist position,” says Morgenthau, “militates against the assumption that the present division of the political world into nation states will be replaced by larger units of a quite different character, more in keeping with the technical potentialities and the moral requirements of the contemporary world.”

According to Michael Williams, Morgenthau’s emphasis of the world’s “moral requirements” and its potential for change illustrate how ideas remain highly relevant in the realist tradition. These assumptions come through yet again when Morgenthau discusses the balance of power, which maintains order through an equilibrium of opposing forces: “[I]t is the purpose of all such equilibriums to maintain the stability of the system without destroying the multiplicity of the elements composing it.” Yet power balancing is not a mechanical outcome of state behavior. Instead, it emerges from a “moral consensus of the modern state system.” The classic European balance of power, which maintained peace among the region’s leading states, was thus a function of “the intellectual and moral foundation of Western civilization.” The great powers felt that they were part of a single historical community of European states. Membership in that community required that they abide by certain rules to preserve its stability, including the conscious maintenance of the balance and restraint in the use of one’s own power. These principles generated the most robust kind of balance seen in international history, namely the nineteenth-century Concert of Europe. It was shared moral principles, then, “which kept in check the limitless desire for power” that made possible the preservation of state sovereignty and prevented any one state from dominating the system with its own moral standard.

So what might we learn from Morgenthau when looking at the Middle East? If the United States wants to see regional stability, then it ought to pursue a balance of power underwritten by some kind of moral principle acceptable to all. That principle is pluralism, or the acceptance of others’ existence and mutual respect of each other’s autonomy. For Joel Rosenthal, pluralism means accepting that some moral claims cannot be resolved in a neat consensus. But its rejection of universalism does not mean we should relapse into relativism. Instead, we should explore how our different understandings of right and wrong blend into each other while respecting our differences. Pluralism thus requires that we “enter into another world and experience part of it as others do,” and the process of doing so is what defines us as human.

Pluralism has historically not been accepted as the basis of regional order. Rather, the United States has sought to impose its own rules through regional hegemony. That’s generally not gone well. Since the Iranian Revolution of 1979, Iran has viewed American dominance as a threat to its own survival and reacted by seeking revisionism. American clients like Saudi Arabia, Egypt and Israel have continuously repressed rival political movements (either Islamists or Palestinians) which seek opportunities for political participation or self-determination. Combined with the Iraq War, some Muslims have sensed that their repression will always be constant in an American-led order and instead have turned to extremists like Al Qaeda or ISIS. The Trump administration’s current Middle East policy is merely a continuation of this failed strategy. By siding with Saudi Arabia over Iran, it will only exacerbate the sectarian Sunni-Shia conflict and strengthen extremists whom are the United States’ real enemy.

But glimpses of pluralism have emerged in recent years. The Obama administration’s engagement with Iran via the nuclear deal effectively was grounded in recognizing the Islamic Republic as a member of the “community of nations.” And President Hassan Rouhani, who won reelection by promising to continue engaging the world rather than than attempt to overthrow it, has offered the strongest challenge in history to the Islamic Republic’s revisionist identity. These kinds of postures are entirely consistent with pluralism: Both the United States and Iran sought coexistence as members of the same community, albeit a much looser one compared to that of Europe. If continued, these initiatives could have served for the basis for not just a balance of power, but even a regional concert: any change in regional order would only take place if it maintained the status quo and is agreed to by all powers, a kind of power-sharing agreement but at the regional level.

Let’s assume for a moment that there was a U.S. administration willing to pursue a Morgenthau-inspired balance of power. How might Washington achieve this outcome? By adopting a more transactional foreign policy that leverages its existing sanctions against Iran and military aid to its allies as incentives to promote mutual coexistence.

The United States would begin by engaging Iran with an offer to restore diplomatic recognition and withdraw economic sanctions. It would renounce regime change in Iran and formally accept the Islamic character of Iran’s democracy. In exchange for normalization, Iran would limit and eventually withdraw support for its militia proxies in Iraq, Syria, Lebanon, Yemen. Normalization would also be conditional on Iranian recognition of Israel and its pre-1967 borders. Such a commitment would be a major blow to the hard-line Iranian Republican Guard Corps, which has defined itself institutionally as the defender of Shia Muslims against Sunnis backed by the Saudis as well as the Palestinians.

If United States wants Iran to de-escalate, then it must ensure that American allies moderate their behavior as well. For years, Saudi Arabia, Egypt and Israel have pursued policies that exacerbate regional conflict and undermine American interests in stability. Washington should propose to make military aid for its allies conditional upon accepting the regional status quo and greater pluralism at home. Many Democrats in Congress have begun to question why the United States supports Saudi Arabia’s devastating war in Yemen. They should next call for wholesale reductions of military aid to the Saudis if they continue their military adventurism and persist in oppressing their Shia minority. Conditionality should also be applied to Israel and Egypt, whose respective refusal to end the occupation of the West Bank and brutal repression of domestic opponents undermine U.S. interests in a two-state solution and fuel extremism. The United States also must demand that Qatar’s autonomy be respected by the Gulf states and Egypt. The United States cannot tolerate any state subjugating one of its own allies, especially one that hosts U.S. military assets at Al Udeid Air Base. Finally, all Sunni states must ensure an end to financial support for extremists like Al Qaeda and ISIS.

If pursued, these de-escalatory initiatives would set the stage for the region’s major powers to freeze its major theater of competition, the Syrian conflict. Ultimately, Syria’s status would be temporarily defined in terms of different spheres of influence, in which all sides of the civil war would maintain their existing control of territory (this is not an argument for partition, which tends to be extremely bloody). The United States, Iran and Russia would pursue agreements regarding how to rollback remaining territory held by ISIS and Al Qaeda’s pseudo-affiliate Jabhat Fateh al-Sham. The United States and its allies would not recognize existence of the Assad regime, but it would accept that Assad’s departure must be consented to by Iran and Russia. But the overall dampening of regional conflict would reduce Iran and Russia’s need to support Assad and enable them to contemplate pushing him aside in the future. Recognition of Iran as a regional power would also obviate its revisionist aspirations, and undermine any interest in a land bridge between Syria and Iraq. And it would willingly give up the capability to pursue such an objective once it reduced support for its militia proxies.