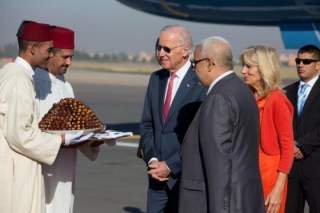 American economic development goals in Africa as described during last year’s African Leaders Summit run along parallel lines. They too include food security, infrastructure development, and the encouragement of American trade and investment. But to translate these goals into action in a region where the United States’ physical presence is weak and human networks are small, it can be helpful for the country to work with a local partner, already vested and engaged, which Americans have come to know well. Moroccan-American economic partnerships date back decades, and increased significantly following the establishment of the U.S.-Morocco Free Trade Agreement a decade ago. At the Center for Strategic and International Studies, senior fellow Haim Malka has noted that Morocco’s engagement in Africa “complements U.S. policy objectives in both Morocco and sub-Saharan Africa.” He suggests that “existing resources could be channeled to triangular programs where U.S.-Moroccan cooperation can harness Morocco’s expertise and experience in specific development areas to provide training in a third sub-Saharan country.” The approach could build on similar triangular aid programs that the United States has launched in Latin America.

Viewed together, these partnerships can appreciably affect political and economic development in Africa and boost American and global security. At the same time, they pose an opportunity for the American private sector to accelerate its involvement in one of the fastest growing business environments on the planet.