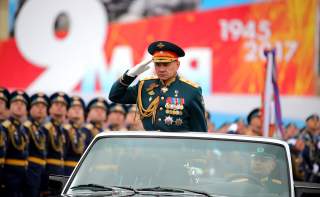 May is a busy time in Moscow, from tanks drilling on the city’s main thoroughfares in preparation for the annual World War II victory parade to the cavalcade of defense ministers flying in for Russia’s annual Moscow Conference on International Security (MCIS). Since 2012, the Russian Ministry of Defense has endeavored to host its own showpiece conference on international security, an homage to the well-known Munich Security Conference in Germany. Russia’s MCIS is a mix of official diplomacy, international spectacle, and a reason for Russia’s national-security elite to meet with the defense ministers of what are chiefly non-Western countries. In recent years it has become institutionalized, a forum for Russia to advance its policy agenda, present the party line on new issues in international security and, of course, rehash familiar grievances.

This year the conference attempted to balance a confrontational tone with offerings of cooperation, in particular on counterterrorism, which was the overall theme for the event. But judging from much of the discussion, the real topic should have been information warfare, which not only made its debut at this conference, but permeated many of the talking points. “Fake news,” “post-truth world” and numerous other terms in the modern discourse on information warfare were sprinkled throughout speeches, with a separate panel dedicated to the topic. “Information war” had clearly arrived in a big way, and not just because nobody could stop looking at their smartphone during the conference.

MCIS 2017 proved another interesting foray into the minds of Russia’s national-security aristocracy, with a veritable lineup of who’s who in terms of leadership, including Nikolai Patrushev, Sergei Shoigu, Sergey Lavrov, Alexander Bortnikov, Sergei Naryshkin and, of course, Chief of the General Staff Valery Gerasimov. However, from the very opening it was clear that Russian leadership was somewhat out of practice when it came to speaking about a cooperative agenda, and while their rancor over long-standing problems with the West came through, the willingness to work together was much less apparent. In general, they had trouble holding back sincerely held sentiments on NATO’s activities in Europe, missile defense and the United States’ foreign policy writ large, which got in the way of the desire to extend an olive branch to the West.

Despite the fire and brimstone, the Russian leadership did signal a desire to reengage with the United States, while compartmentalizing other issues in the relationship, but it was presented on a take-it-or-leave-it basis. Moscow did not come off as desperate to cooperate, but if anything as more firm. Fighting ISIS together was the focal point of Russian commentary on prospective cooperation with the United States, but these points came with reproaches on violating countries’ sovereignty, and the recent cruise missile strike in Syria, which was termed a crude violation of international law. It seemed that Russian officials were trying to speak from a position of strength.

Sergei Shoigu offered four points for solving Syria: defeating the radical ideology at the root of ISIS, passing a new constitution, implementing economic reconstruction and conducting demining operations. This came with an offer to share Russia’s experience in fighting terrorists with air strikes, particularly arms and tactics, which made sense since the conference has always been partly an arms expo (the subtle hints included numerous weapons-company logos on the side of the conference screen and the large Rosoboronexport booth outside the hall). He reserved particularly harsh words for NATO’s role in Europe, reminding the audience that it was a political-military bloc and not a stamp-collecting club (which was reassuring, since some people in DC wonder). Shoigu emphasized that the expansion to include Montenegro was a bid by NATO to control the Balkans, while NATO’s Baltic Air Policing mission and other activities were intended to create an antiaccess zone around Kaliningrad.

Valery Gerasimov, chief of the general staff, was followed directly by Andrei Ravkov, Belarus’s minister of defense, in what were complementary presentations on the Russian and Belarusian views of European security. The gist was that NATO’s increased military presence and high tempo of activity are resulting in the militarization of Europe, driven by the alliance’s desire to reinstate Russia as its traditional enemy. Perhaps on a less serious note, Ravkov mentioned that American demands for greater defense spending were merely lobbying for the U.S. defense sector, portraying the entire affair as a cynical corporate ploy. Gerasimov’s four factors behind the increased state of confrontation in Europe included NATO’s growing militarism, continued expansion of missile defense, unregulated conflicts in areas such as Ukraine and the rise of radicalism on the continent.

While some of the opening speeches touched on the topic of information security, it was Gerasimov’s presentation that featured the most concrete language blaming the West for launching an information-warfare campaign against Russia. He charged Western mass media with a fixation on Russian hackers, assigning fault to Moscow, in order to discredit its efforts in the international arena. Gerasimov reminded the audience of the inherent difficulties of cyber attribution—that is, don’t blame Russia. At the same time, he emphasized the increased transparency of the Russian military, and potential opportunities for cooperation against terrorism, after taking pause to reflect on what a great job he and the General Staff had done in Syria.

Arguably the most interesting breakout panel discussion of this conference was that on information security, where Russian general Igor Dylevsky asserted that NATO had codified an approach to information warfare at the 2016 Warsaw Summit. He tied the issue of information warfare to Western-led color revolutions and the Arab Spring, lamenting that information tools were now actively used by terrorists. Dylevsky raised the problem of delineating what constitutes an act of war in cyberspace, exploring the blurred lines and unclear rules for arbitration in this space. A deputy chairman of Russia’s Duma, Irina Yarovaya, who has a reputation in Russian politics for seeking to curtail civil liberties in the interest of state security, made a decidedly anti-American speech. She proclaimed that information warfare was a weapon of mass destruction, codified by the United States back in the Cold War, and blamed America for monopolizing the information sphere.

The problem of information warfare appeared dizzying, confounding, hard to grasp intellectually and overblown—in other words, the discourse was no better than many of our conversations on this subject in the United States. Vladimir Solovyov, a well-known Russian television personality who supports much of Russia’s official policy, reproached the government’s view as antiquated, exclaiming that modern media should not be used like airborne assault infantry. From his perspective, there has been nothing new in this field since the writings of Sun Tzu, and the government’s real problem lay in making itself attractive to its own people. Despite a politicized discussion, replete with banal talking points, Russia’s concerns about the inability to control information and the potential impact of intensified conflict in this domain seemed sincere.

Missile defense was a prominent theme throughout the conference. Russian speakers, including both Shoigu and Gerasimov, trotted out well-worn talking points about the threat to strategic stability posed by American ballistic-missile defense and the implausibility of American explanations that the systems will not target Russia. The new feature, highlighted in the panel discussion devoted to missile defense, was the incorporation of China into the Russian model of how U.S. missile defenses will be capable of intercepting all ballistic missiles launched at Western countries, regardless of country of origin.

The Chinese view was presented by the deputy chief of the Main Operations Directorate of the Unified Staff of the Central Military Council, and largely parroted Russian arguments about how American missile-defense plans exceed the requirements to counter North Korea’s missile program, and are actually aimed at degrading Chinese and Russian strategic capabilities. He also highlighted the expansion of Russian-Chinese bilateral exercises aimed at countering U.S. missile defense. No new solutions to the disagreement were offered by representatives of either country, just calls for more dialogue about joint systems and verified limits.

The conference featured several regional discussion panels, including panels addressing the Middle East, Central Asia and the Asia-Pacific region. These were stacked with various national ministers of defense, offering them a platform to speak, and signaling that Moscow was not internationally isolated. MCIS sought to hit some positive notes in terms of international cooperation on security issues, but Russian officialdom struggled to offer any solutions to the long-established laundry list of problems in bilateral relations. They articulated a willingness to cooperate with the West on areas of mutual interest, but the tone throughout was stern and confrontational.

Michael Kofman is a Global Fellow at the Kennan Institute, Wilson Center, and a senior research scientist at CNA Corporation. He blogs at russianmilitaryanalysis.wordpress.com. Dmitry Gorenburg is a senior research scientist in the Strategic Studies division of CNA, a not-for-profit research and analysis organization, where he has worked since 2000. In addition to his work at CNA, he is the editor of the journal Problems of Post-Communism and an associate at Harvard University’s Davis Center for Russian and Eurasian Studies. He blogs on issues related to the Russian military at russiamil.wordpress.com.