Moscow's Iran Man: Why Is He Smiling? 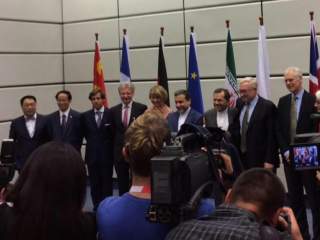 Ever since the Russian invasion of Ukraine, relations with the United States and Europe have gotten increasingly tense. Russia’s sending bombers to test European and American defenses. The Europeans are standing by sanctions. So it’s more than a little peculiar to see Russian deputy foreign minister Sergei Ryabkov, who was the principal day-to-day negotiator, broadly smiling about the Iran agreement in the above photo (taken by Al Monitor journalist Laura Rozen). Does he know something the rest of us don’t?

For a number of reasons an agreement between Iran and the West does not immediately appear to be in Moscow’s own interests. Quite the contrary. Consider the impact on oil. Already the unexpected plunge in oil prices, coupled with sanctions, has put more than a minor dent in the Russian economy, which is overly reliant on black gold to fund Russian president Vladimir Putin’s lavish social-welfare commitments as well as his ambitious military-modernization plans. The Iran agreement has already begun to effect a further diminution in prices—predictions are that by summer’s end American motorists will be see gasoline at $2 a gallon.

Nor is it clear that Russia will profit economically by selling arms to Iran. What does Russia have to offer that France, Germany or even the United States do not? It’s been experiencing some nasty hiccups with its own military, the most recent case being the crash near Khabarovsk of a TU-95 strategic bomber. The crash prompted David Cenciotti of The Aviationist to ask, “Is the Russian air force falling apart?” He reports, “Along with the two Tu-95s, the most recent Russian crashes include a Su-24 Fencer, two Mig-29 Fulcrums and a modern Su-34 Fullback.” For Russia to count on lavish arms sales to Iran in the future looks like an iffy proposition at best.

Finally there’s the diplomatic aspect. Until now Russia played a key role in Iran as an interlocutor. Now a tentative détente between Washington and Tehran could be in the offing. Why did Moscow surrender, in effect, its Iran card?

It could be as simple as a desire on the part of Foreign Minister Sergei Lavrov to avoid further isolation. Gumming up the diplomatic works would have incurred the ire of not only the United States, but also China. Maybe there’s also a kind of quiet bargain between the Obama administration not to send arms to Ukraine in exchange for Russian cooperation on Iran—something Congress, for one, might be curious about. In an interview with New York Times columnist Tom Friedman on July 14, Obama lauded Putin: “Russia was a help on this. I’ll be honest with you. I was not sure given the strong differences we are having with Russia right now around Ukraine, whether this would sustain itself. Putin and the Russian government compartmentalized on this in a way that surprised me, and we would have not achieved this agreement had it not been for Russia’s willingness to stick with us and the other P5-Plus members in insisting on a strong deal.”

According to TASS, Lavrov himself offered the anodyne explanation, “It would be more right not to talk about how Russia is going to benefit from this agreement because it is not intended for giving unilateral advantages to anybody. The agreement was initially aimed at working out a comprehensive approach to removing all risks for the nuclear non-proliferation regime and doing it on the basis of internationally recognized right, which is fixed in international documents, of states, specifically Iran, to develop peaceful nuclear activities, including uranium enrichment.”

Still, the jubilation expressed on Ryabkov’s face goes even further than mere cooperation. It suggests that Russia subordinated itself to Washington and Europe. The reason why could emerge in coming months. Maybe there isn’t a secret deal, but there could be a naïve hope that Moscow, in playing a supporting role, can return to business as usual with America and its European allies, a hope that is more likely than not to be disappointed.