Moscow's War in the Air: Russia Sends a Message in Syria 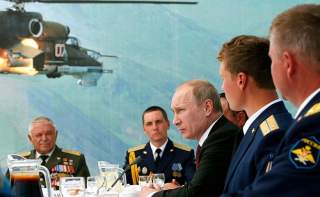 The start of Russian airstrikes in Syria—two days after Vladimir Putin listened to Barack Obama's UN General Assembly speech, which warned against Russian action in defense of the Bashar al-Assad regime (and then had such warnings reinforced in their one-on-one meeting)—is the Kremlin's answer to the questions that have been posed about Moscow's true intentions and interests.

First, the choice of targets in the first wave—with reports that the strikes hit non-ISIS Syrian opposition groups, including some affiliated with the Free Syrian Army and those who have been deemed credible to receive Western aid—is a message to the region as a whole that while Russia is prepared to use deadly force to defend its interests and to defend its clients, those who have accepted Western patronage will not enjoy such support. The fact that some Russian outlets have also begun to take the line that there is no such thing as a "moderate opposition"—only groups that have varying degrees of support for and affinity to the Islamic State of Syria and Iraq (ISIS)—suggests the promulgation of a narrative that the conflict in Syria is now binary and one is either with Assad or "with the terrorists" and groups that continue to fight against Assad are de facto allied to ISIS. (On a separate note, it will be quite interesting to watch how the Russians deal with the Syrian Kurds, who have fought ISIS, but have often reached an apparent modus vivendi with the Assad regime to be left alone to enjoy a de facto autonomy).

Second, the speed at which the strikes have started is meant to convey to other countries in the region as well as to the Europeans that Russia can move quickly and with determination, in contrast to the Hamlet-like indecision exhibited by the United States. Having identified its interests, Moscow is willing to act and to take risks. Just as Russia intervened in Ukraine last summer to prevent the eastern rebels from being overwhelmed—and created "new facts" on the ground leading to the Minsk-II agreements—the gamble here may be that Russian action could stabilize the Assad regime and force other players in the region, starting with Saudi Arabia and Turkey, to negotiate with Moscow over Syria's future.

The image of Russian decisiveness stands in contrast to the takeaway from the anti-extremism summit convened by Obama in New York on Tuesday—where, as Margaret Warner noted, leaders of the U.S.-led anti-ISIS coalition “couldn’t say they have achieved much...almost none could point to a real accomplishment. Then they didn’t have any frank discussion about the fault with their own strategy and what they should do.”

Finally, the timing of the strikes—within hours of Putin's return from New York—is meant as a slap in the face to President Obama and to the United States as a whole. U.S. presidential candidates may outdo each other in calling Putin a thug, a gangster, a criminal or a dictator; they may give long eloquent speeches about how Russia is on the wrong side of history—but Putin believes he can create facts on the ground that challenge the U.S. narrative. The implications of the Iraqis joining with Iran, Syria and Russia to form an intelligence coordination unit and Iraq's decision to allow Russian overflights of its territory—after all the funds spent to train and equip Iraqis—suggests that Putin believes that things are breaking his way.

Of course, it is early days yet. Russia may be risking being sucked into a Middle Eastern quagmire by its actions in Syria, and further straining a weakened economy. But there is no question that right now, the Kremlin has taken control of the narrative.