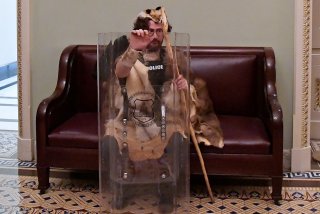 The majority of defendants charged in the Capitol assault on Jan. 6 not only shared an interest in reversing the 2020 election results and keeping Donald Trump as president but also had something else in common—the group had a deepened history of financial hardship.

Nearly 60 percent of the people faced with charges for the Capitol riot had previous money difficulties, including bankruptcies, unpaid tax bills and other debts, lawsuits involving unpaid debts or notices of eviction or foreclosure, according to an analysis conducted by The Washington Post of the 125 defendants who had publicly available financial information.

The Washington Post also uncovered that the group’s bankruptcy rate stood at 18 percent—almost double the national average—and that 20 percent of them faced home eviction or foreclosure at one point.

One of the Capitol rioters—Jenna Ryan, the Texas real estate agent who arrived to Washington, DC amid the electoral vote certification via a private jet—filed for bankruptcy in 2012, almost lost her home to foreclosure before that and was still paying off $37,000 for unpaid federal taxes when she was arrested for her involvement in the attacks.

But now, Ryan told The Washington Post that she “bought into a lie” and that she regrets “everything” for believing Trump’s baseless claims of voter fraud, as she now faces two misdemeanor charges.

Ashli Babbitt, who was shot and killed by law enforcement when she tried to blast through a door’s broken window inside the Capitol building, had been drawing in a $23,000 judgment from a lender four years ago.

While some of the defendants found themselves climbing out of financial turmoil, many of them once stood at the center of difficulty, facing a debt repayment of just a few thousand dollars roughly ten years ago to unpaid tax bills of nearly $400,000 or the threat of losing their homes.

Dominic Pezzola, a member of the Proud Boys, according to federal authorities, and a supposed ringleader of the Capitol siege, was named in a spate of New York tax warrants during the last five years, adding up to more than $40,000.

Although The Washington Post’s findings don’t offer a clear indication over why thousands of Trump supporters flooded the Capitol, experts have suggested that people saddled with debt or other instances of financial challenges can make some feel more compelled and confident to commit such acts of insurrection.

“I think what you’re finding is more than just economic insecurity but a deep-seated feeling of precarity about their personal situation,” Cynthia Miller-Idriss, a political science professor who helps run the Polarization and Extremism Research Innovation Lab at American University, told the Post. “And that precarity—combined with a sense of betrayal or anger that someone is taking something away—mobilized a lot of people that day.”

Researchers noted that being in a low-income or uneducated sector does not necessarily mean that they’ll be more likely to participate in extremist movements, as thousands of people involved in the rise of right-wing extremism and the QAnon conspiracy theory are also members of middle and high-income classes, with some even having a college education.